I’ve had a few issues with the iiNet Bob2 modem/router in the past week or two, and rang up support on Sunday to get it sorted out.

At one stage the nice chap asked how many devices are using the modem. That’s a really good question, and one that I hadn’t previously thought about. 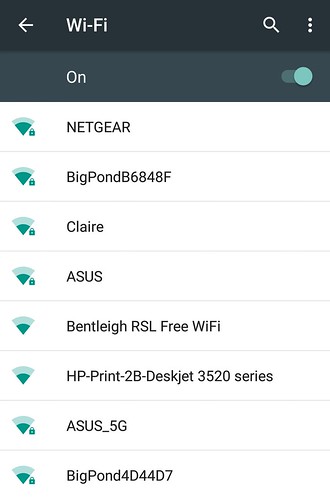 The answer is quite a few.

The others vary according to who’s home at the time.

So potentially up to 15 devices, 13 of which use WiFi.

Plus the VOIP cordless handset (not sure if this uses WiFi or not).

It’s more than I thought it would be, but I suspect not unusual in this day and age.

3 replies on “How many WiFi devices are in your home?”

Quick count, 18 items regularly attached to the network, 11 on WiFi, with another 6 tablets/phones/kindles occasional users.

I had to look up what a Yamaha receiver was. I thought you had a motor bike with an internet connection!

In a 4 person household, we all have desktops, laptops and smart phones. Then there is the TV, DVD, Media player, Linux Server, Wii, Xbox, Chromecast, a couple of tablets. and possible a visitor or two. I also still have my Palm T/X but don’t connect its Wifi anymore because it only supports WPA.