As I’ve noted in the past, I no longer wear ties to work, and have a range of different shirts.

Apart from regularly stocking up with Van Heusen and Gloweave shirts when the sales are on, I’ve been trying out Charles Tyrwhitt shirts — you know, the online shirt company that at one stage seemed to be placing endless ads in newspapers.

Some observations on Tyrwhitt shirts:

The orders have come through within about a week. Be aware that once you order from them, you will receive a truly incredible amount of advertising in the mail from them.

The quality seems quite nice. The 40/41 neck, regular sleeve length, slim fit seems to fit me well. They also do an extra slim version which I suspect wouldn’t sit on my slightly pudgy body so well. Classic fit is also okay, but I prefer the slim fit. 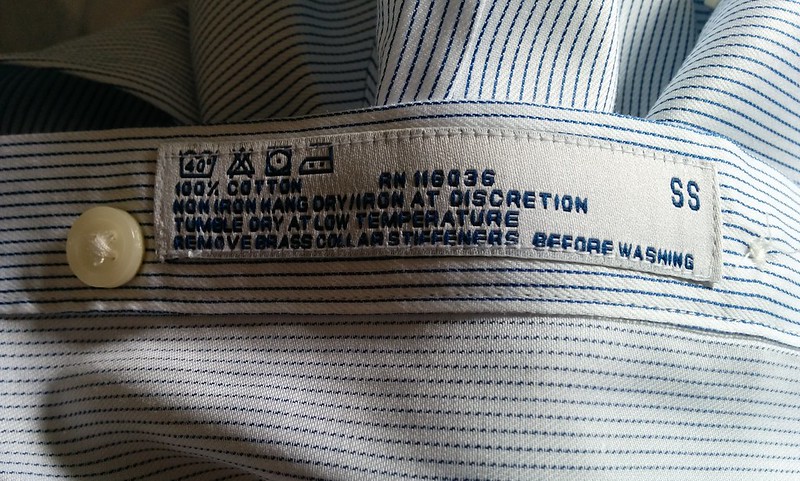 Despite proudly boasting their Britishness on all their literature, and pointing out items in the catalogues that are made in the UK, none of the shirts I’ve bought from them have clearly stated where they are made on the packaging or labels.

And despite appearing at first glance to be steeped in the tailoring tradition of Jermyn Street, London, they have only been around since 1986. Mind you, that’s still almost thirty years.

My most recent order was made when I probably wasn’t paying enough attention — I accidentally bought two of the identical white with blue stripes design. Whoops, But given Karl Stefanovic’s little experiment wearing the same suit on TV for a year, which went unnoticed, I doubt it’ll be a problem.

It appears that Tyrwhitt takes the Kathmandu approach to specials, but moreso. Basically nobody in their right mind would pay full price if they can possibly avoid it. Shirts evidently go on sale at full price for a while, then are heavily discounted down to a more “real” price, which most people end up paying. As Wikipedia notes: Tyrwhitt uses a high MSRP, high discount model (also called high-low pricing).

That said, the strategy has me sucked in. I’m happy to pay $35-40 for a good shirt. You could pay a lot more, though I suspect you’d get better quality.

I’d be more reluctant buying other items such as suits and shoes from them, given sizing issues, though I have bought a few pairs of shoes from Florsheim online, as they seem to be pretty consistent in their sizing (and I hate shoe shopping).

But I’ve been happy with the shirts I’ve ordered from Tyrwhitt, and will keep using them.

Update: As Philip says in the comments, once you’ve bought shirts from Tyrwhitt, you’ll be bombarded with catalogues in the mail (and email). Today I had something different — an unmarked envelope from James Way, Milton Keynes (UK), which turned out to be them again, with a $20 voucher for my next purchase.

Yes I’ve bought two shirts from them recently and they’re both very good shirts. I’ll buy a few more in the next couple of days. I tried their offer that was included with the Royalauto magazine and now I’m getting catalogues in the mail every few weeks. It must cost them a fortune in printing.

Great tip, thanks.
My reluctance to buy things on line is that they can be delivered when no one is home and you get a card telling you to pick up in business hours. Great! I work in town. How do you manage that?

@Roger Go on a Saturday? Most Post Offices are open for the morning at least, I believe

Daniel, thanks for the review, I have been humming and hawing about whether to buy from, but now will give them a go.

Marks & Spencer is probably the most affordable English clothing label as it is free delivery for orders over £30 to Australia.

The Gloweave factory outlet on Smith St. Collingwood is quite good as well for price, if you did not know about it.

I am amazed that neither Fiji, Bangladesh, Thailand or Guatemala are on that list.

If you want to stop the advertising, tell them to stop. A company in Australia using your details for marketing after you have asked them to stop is breaking the law.

I said luv, I said, pet. A Jermyn Street tailor is all very well to supply your shirts , but sadly two days later a supplement appeared in the RACV mag. Riches and class to rags in one fell swoop.

PS If I needed a business shirt, I may have been tempered.

Surprisingly there does not seem to be a tailoring shop here which measures you and then gets your shirt made in Thailand. And then ships them over direct to your house.