I’ve never been one for organised sport, but I’ve had a few failed attempts at an exercise regime over the years. In the late 90s, I would regularly go for a short morning run, but I kind of fell out of the habit after a few months. A couple of years ago I got a punching bag, but it hasn’t really stuck.

I do get a fair bit of walking in. But I was looking for something a little more intensive, specifically to lose belly fat, which over the Christmas period can be an issue, but which to be honest I’ve been picking up over the past few years. 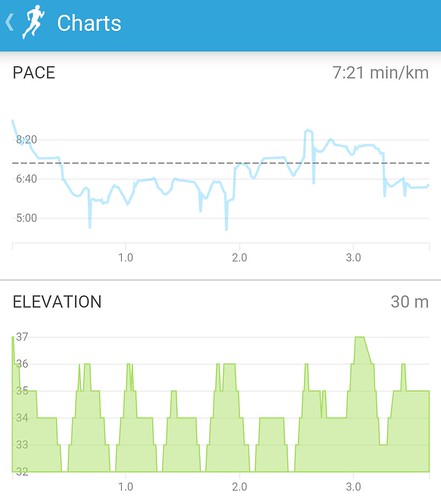 Googling around I found this page, which may or may not be reputable: WikiHow: How to Lose Belly Fat.

It suggests a number of things, but one of the exercise ideas caught my eye:

And it gives this example:

Sprint. Run as fast and as far as you can for 20 seconds, then slow to a walk until you catch your breath. Repeat for 10 minutes.

As someone who sometimes sprints to catch a train, tram or bus, this appealed to me. So I’ve got a routine going now, which I’ve been doing since mid-December:

I’ve been doing this three times a week (Thursday night, Saturday morning, Sunday night — these are the easiest times at present), but more often in the past few weeks as I’ve had a bit of leave from work. RunKeeper is tracking my progress (hence the graphs above), and nagging me if I go more than three days between runs.

If I get a stitch, I gather there are ways to combat that, by taking care with what/when you eat, and warming up properly.

I’ve tried running with music, but I need to get earphones that don’t fall out… and the music means I can’t count the steps/laps properly. It would work by going at a slower, more consistent pace that doesn’t need counting.

Is the running having an effect? I hope so, but it’s a little hard to tell. Belly still round, but the “grab test” seems to be a little harder, so the signs are good.

I’ll try and keep at it.

Who else is running, or has a different exercise regime?

8 replies on “Taking up running (again)”

I’m in training for the Great Train Race. My sister and I ran it last year and I clocked in at 1 hour 15 minutes for the 13.5 km distance. 10km minimum twice a week at the moment and 3km three times a week. I only plan on sprinting if I’m trying to beat Puffing Billy past the finish line at Emerald Lake ;) Good luck with your regimen.

I took up cycling late last year, and my new year’s resolution was to get on my bike more often and for longer. Not only am I now getting to and from work, the shops, and the station by bike, but I’m also doing regular 50km rides. I started small obviously – building up from 2 or 3km rides – but I’ve noticed a huge improvement to how much energy and enthusiasm I have, how happy I feel, and how I’m no longer out of breath when I do have to sprint for a train!

Good luck, Daniel. Sounds like you are motivated to stick to a regime. Not sure a “grab test” is scientific, maybe there is a tape measure app?

I love running but I’ve found I don’t have time to get out and about enough – looking after my boy 3 nights a week means I can’t get out those 3 nights/mornings at the very least.

Would have loved to get a treadmill – but at 6’2″ (184cm or so?) I need a bigger one which cost a small fortune – and not great in a small apartment – so I ended up buying a spin bike. Quiet, small form factor and really quite enjoyable – and I can do it at night without disturbing my boy when he is sleeping. “Cycling” about 150 – 200kms a week so far, and I’m sure eventually it will start to have an effect on my Xmas etc belly….

Good luck with your running – the cold in Melbourne would get me. Grab some compression “tights” if you get into it – they make a big difference (even the cheaper versions seem to work better and keep your circulation going better) – and get some decent in-ear headphones, let runkeeper track your running and just go. You can set up interval training in runkeeper – easy as. Don’t worry about laps or steps…. I like Runkeeper’s ability to map out courses – I found that particularly fun to switch it around constantly so I wasn’t bored.

Good luck – and let us all know if you need the motivation of strangers!

@Randall, yeah juggling looking after kids is a challenge. The spin bike is a good idea in your circumstances.

Not sure how I’ll go in winter! And yes, I’ll keep experimenting with RunKeeper.

Must admit that since I had kids more than five years ago I haven’t been on my bike once – just isn’t the hours in the day to head out on my own just to ride.

So I instead ride my exercise bike, watch an episode or two of Stargate or Star Trek or Battlestar Galactics, and catchup on news via my iPad.

I miss my real bike, but I am achieving three things in one window of time every single day (actually if I can afford to sometimes twice a day on weekends – morning and night).

I took up running a couple of years ago, and started with a couch-to-5k program. It starts you off with short run/walk intervals, and gradually increases the “run” intervals until you can run 5k without stopping. I signed up for a 5k race as well, to motivate myself. From there I gradually added distance (rule of thumb is to increase distance no more than 10% per week) and now I’m training for my second marathon. I like RunKeeper as well — it’s nice and simple, and you can connect it to MyFitnessPal, which is great for tracking calories. At some point about a year ago I started meeting up with a running group at my local running store, for training twice a week. The social factor is a great motivator to get my butt out the door when I’m having a lazy day.

I came back from holidays and decided to get the momentum going by riding into work. 3 out of 4 days I’ve commuted by bike so far and I’m loving it – a 15km ride, and with recent improvements to bike trails it’s getting safer all the time. I’ve decided I’m going to try making a cycle commute ‘the norm’ – the money I save on Myki / fuel can go towards new lights for the bike.

I’m a bit of a wuss when I feel any cold / wet on my legs, though, so I’ll need to work hard on the motivation front to keep this up past March!

Like you, though, I’m thinking the odd bit of interval training might need to go into the mix. Cycling may give me good legs (and maybe even a nice bum!) but once my body adjusts it won’t really be ‘hard work’. The trick will be how to get that interval training into my routine in a manner that’s ‘easy’. Cycling is ‘easy’ as it takes little more time than my regular commute anyway.