Two sleeps until the election.

Apart from trying to get citizens out to a public meeting, where in the neighbourhood is the best place to meet as many people you can, face-to-face?

Judging from what the politicians and lobby groups have been up to, it’s the railway station — on weekdays, at least.

I’ve lost count of the number of flyers I’ve been handed at Bentleigh station over the past few months. Undoubtedly it’s due to being in a marginal seat. 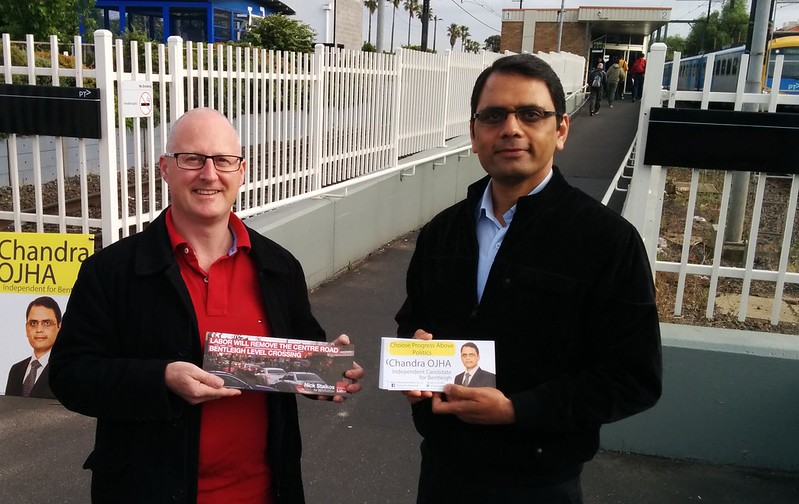 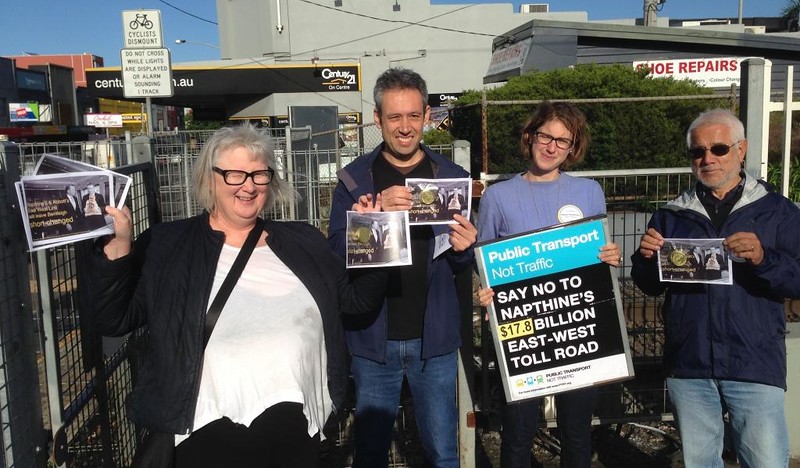 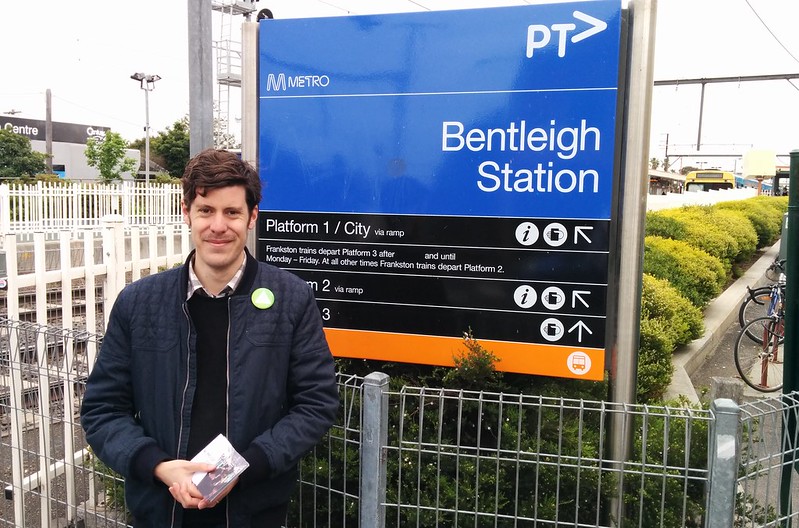 The political parties and one of the independents, as well as various unions and lobby groups (including one supporting national parks, and also Public Transport Not Traffic) have been prominent at the station in the last few weeks.

Mostly they are in the morning. It’s easier to hand out flyers as you get a steady stream of people, and if the train isn’t imminent, they can stop for a minute to ask questions. In the evening few people want to linger; they’re keen to get home. Plus it’s harder to hand out to scores of people arriving in a burst, followed by minutes of nobody going past.

Chalk one up for the trains. Cleverer people than I might ponder if this helps skew policies. As the Liberals’ fake commuter newspaper shows, it certainly helps influence campaign literature.

You’re certainly unlikely to have a face-to-face encounter with politicians and their supporters while driving your car. Sadly those people who are unable to use trains because suburban connecting buses are so poor will also miss out.

On the weekends the campaigners tend to be elsewhere in the shopping centre, though sometimes at the station. The advantage for them of street shopping centres is I doubt they’d ever get permission from a Westfield or Gandel to set up in Chadstone or Southland.

Of course this week, they’re also at early voting centres, and will be swarming around polling places on Saturday. (The first inkling I had that Bentleigh was at risk of swinging from Labor to Liberal in 2010 was when I heard that then-Premier John Brumby had been seen at a local polling place, Mckinnon Secondary College. On voting day you’re most likely to see the senior pollies in marginal seats.)

I’ve been tracking the various flyers handed to me in person via Twitter at Bentleigh station. Here are a few instances of flyers and local campaigning from the past month or two:

Both Labor and Liberals out today in #Bentleigh. #VicVotes #SpringSt pic.twitter.com/dIVR1fdFjH

Libs at #Bentleigh station again. Shirts and signs devoid of party name. Was in a rush, didn't get a flyer. #VicVotes #SpringSt

Oh! Look whose image now adorns the shop next to the level crossing her party won't remove. #Bentleigh #VicVotes pic.twitter.com/4BLkA3AXg3

Today's #Bentleigh station flyer from the Libs. By the way, the 8:29 is cancelled. #VicVotes #SpringSt pic.twitter.com/Ld4oiXHa5k

Not great weather, but @EMiller and friends are out and about on Centre Rd today. #Bentleigh #VicVotes #SpringSt pic.twitter.com/15LtK1CDcq

Today's flyers at #Bentleigh station: one ad, one union. By the way, the next train is cancelled. #SpringSt pic.twitter.com/K5pGgQMUIo

Good morning, swinging #Bentleigh voters. No flyers today, but this was waiting outside the station. #SpringSt pic.twitter.com/kGcrUozgln

Today's flyer at #Bentleigh from @NStaikos. Coalition not matching this promise; they want #EWLink instead. #SpringSt pic.twitter.com/oe8TbFIbXK

PS. On Monday the PTUA put out its election scorecard. If you’re interested in public transport issues, and they’ll influence your vote, check it out.

Update: After the election…

#VicVotes pretty much over. It might be just the Jehovah's Witnesses we see at the station for the next 3 years. pic.twitter.com/8A1EIVrvYA

I think the prize goes to your son for his comment about Southern Express not stopping at Southland. Ha!

Re: The Greens saying they will increase seats on PT.

The Dubai Metro has a gold class carriage where the tickets cost double the price of a normal carriage. But it would surely get people out of their luxury cars if they know they dont have to share an overcrowded carriage with unwashed commoners.

of course, they are not permitted to hand out political material or canvas on station property so I hope they were on the public pavement.
This rule is frequently flouted at Hawksburn station by the two major parties – drives me nuts.

At Bentleigh I haven’t seen them go up the ramp (with perhaps one exception); they all stay at the street end next to the boom gates, and are nowhere near as annoying as chuggers, who regularly are permitted on the concourse at CBD stations.

Or in Sydney’s case the ferry wharf. John Fahey some years ago at Cremorne Point staked out the wharf and shook hands with everyone, including me staying with friends.