Letters that arrive in anonymous envelopes and then turn out to be party political propaganda are not my favourite thing.

This one from the State Liberals showed up the other day.

The Liberals’ signature project, perhaps the most expensive infrastructure project ever undertaken in the state, is the East West road tunnel — around $18 billion in construction costs, but likely to cost much more to taxpayers as a PPP.

Am I mistaken? I can’t see it mentioned here at all — not in the brochure, not in the cover letter. Could it be that they know few in this area think it’s a good idea?

What are other areas getting? 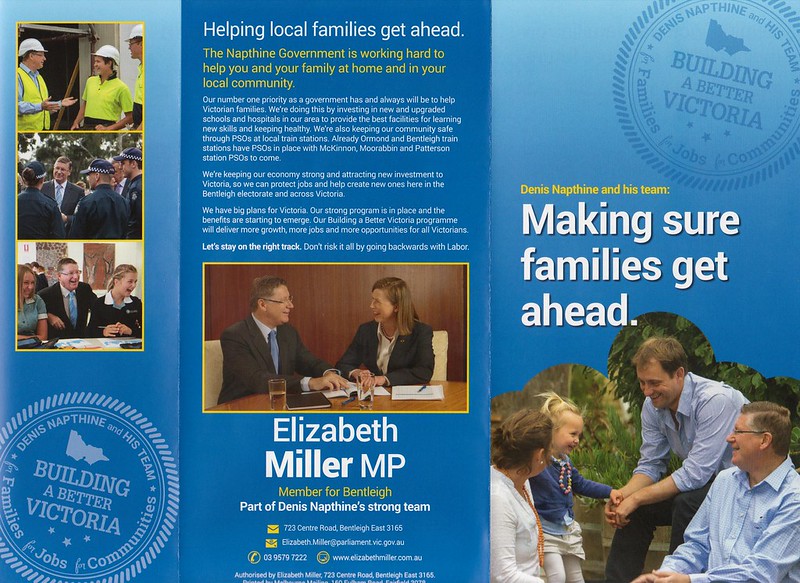 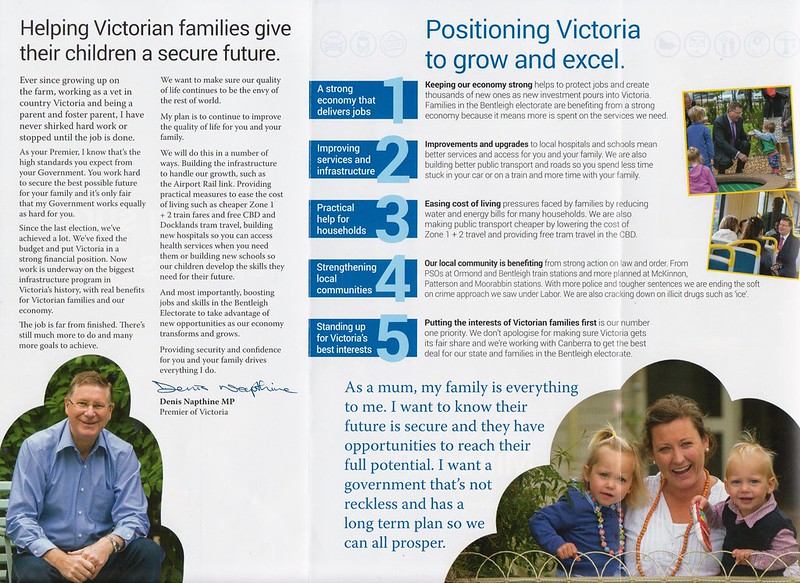 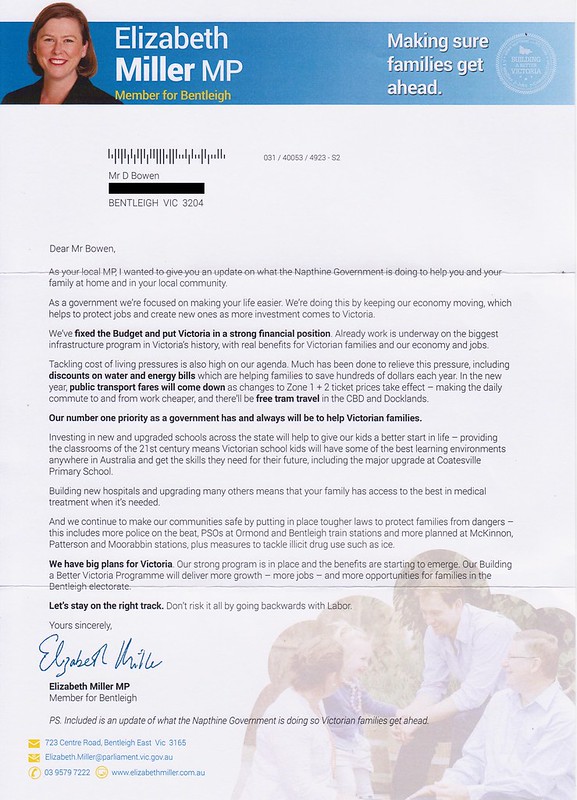 .@danielbowen not even pretending to be bipartisan anymore…a flyers a flyer. Transport is not feature on it. #springst

8 replies on “Govt flyer sent to #Bentleigh voters missing any mention of their biggest project: #EWLink”

daniel
yes, you think if the project was so good, you’d want to tell people about it.
I’m surprised that the letter says that public transport fares will come down next year – making the daily commute to work cheaper. Like you, I live in zone 1 and 2 overlap and commute to the city. I think my fare will go up by 5% next year. What a dumb thing to say in a letter when many in Bentleigh electorate travel only in zone 1 (or only in zone 2).

I would say the Eddington-Parkville freeway (Known as East West Link) would not be relevant to anyone who lives in the Bentleigh area. Therefore it does not surprise me that they would not waste space on a leaflet in advertising it.

It is sad that we are now stuck with that very section of road.

That quote from the Mum makes me feel like she’s talking about a different party altogether! Not reckless? $1m per metre on a road isn’t reckless? Introducing cattle grazing in National Parks that will trample native flora and introduce invasive weeds that increase fire hazard isn’t reckless?* A long term-plan? Like promising one suite of major projects before the election then altering virtually every one in the following few years? Slashing TAFE funding, slashing the public sector, not delivering promised pay rises for teachers, paramedics and then scratching their heads wondering why unemployment has risen?*

Oh yeah, I foresee great stability and prosperity across the state if this mob stick around…

*I could have provided quite a few more examples…

A similar mail out from Member for Prahran, Clem Newton-Brown made mention of it but it was not the first thing and it wasn’t especially highlighted.

I never vote for anyone who says ‘families’ more than twice in a piece of corro.

I got Clem’s letter and this flyer in the mail too today. Since it was addressed like a proper letter to me and did not look like a political flyer I opened it thinking it was a bill or something important. Among other things it mentions plans to free up Punt Rd. congestion with 24 hour clearways and investigate a possible contra flow lane similar to Queens Rd.

What are other areas getting? Absolutely nothing so far in my electorate (Pascoe Vale).

I was about to say “Probably because it has been a safe Labor seat since forever, so the Libs are ignoring it”, but I just looked up the margin and it’s no longer as safe as it used to be. If I receive anything from the State Liberals, I’ll post it here.

Well the Greens came to my door the other day (Clifton Hill) and boy did we talk ew link. They’re trying hard for Richard Wynne’s seat of Richmond. Kathleen Maltzahn needs a 6 percent swing to get it, which seems unlikely since Labor is anti-road and voters will be thinking of evicting Napthine.