In Parks and Recreation they celebrate an annual Treat Yo’self day. Mine was last week. I took my birthday and the next day off work.

After much pondering, I bought a new home theatre setup. 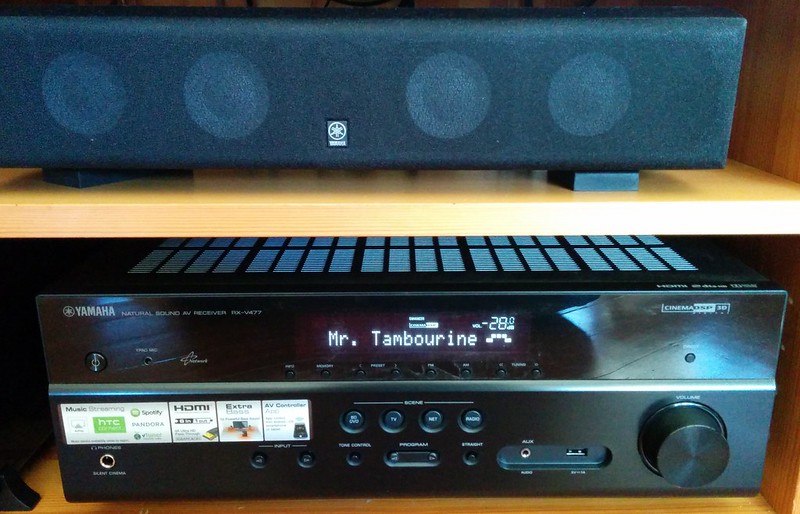 I’d spent way too much time pondering what I was going to buy. For a while I considered buying into the Sonos system — having seen J’s setup, it’s really very impressive. The multi-room stuff is very neat and it sounds great. I almost went down the same path, but what finally steered me away from it was:

So call me a luddite, but the old-fashioned receiver and speakers is for me for now. Having looked at the various models and decided that Yamaha might know what they’re doing more than most — they’ve been in business since 1887, and everyone I’ve known with their gear seems happy with it. (By the way, did you know their logo is three tuning forks?)

So I looked at the various models and decided that by cashing in credit card points, and knowing that my aim is to make this a once-a-decade (if that) purchase, I could just about afford a model going under the snappy name of the YHT-4910AU.

It’s a 5.1 surround speaker set (including subwoofer plus a receiver that’s got neato network capabilities — it’s able to play songs from iTunes or shared drives, as well as internet radio, and can be controlled (and play music from) iDevices and Android phones and tablets.

Searching around I found it’s not too hard to get for about $100 less than the RRP of $1099. But I decided initially to go into The Good Guys in Brighton to play around with it. It sounded good.

The salesbloke got chatting. He confirmed my suspicion that soundbars can be quite effective for surround sound, but not in a room with lots of big open doorways… like my livingroom. He also said the wooden-cased speakers in this set sound better than the plastic ones in the cheaper ones. Sounds plausible.

I was on the verge of walking away to think about it overnight when he said he could get me a good price on it. How good? About $200 off RRP (and their advertised price), or $100 cheaper than the cheapest online price I’d seen.

These salesblokes are good. He haggled for me. I was sold. And he didn’t even try and sell me an extended warranty, nor did he (in line with their old “Pay less, pay cash” slogan) ask me to go and get cash instead of paying by credit card.

He helped me load it into the car boot, but it comes it a box so big and heavy that I needed to wait for help to arrive home to unload it from the car.

The box features a green couch (which wasn’t included, if you were wondering) and their slogan “Powered by music”. Wait. So music from the hi-fi is powered by music? Had they invented some kind of hi-fi perpetual motion music machine? 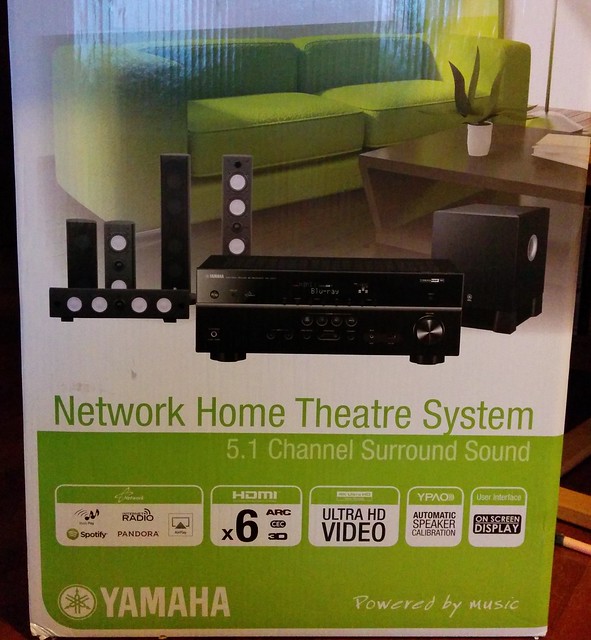 It turns out, no, it needs to be plugged into the mains like other systems.

It took my second day off to get it all set up — including a trip to Jaycar to get an optical audio cable, an extra HDMI cable and a set of wire-strippers, which made life easier.

To make it all fit in the cabinet, the VCR is being banished into a cupboard, only to come out when actually needed (which probably in practice means keeping it for another 5 years unused, then chucking it out.)

There’s an unbelievable amount of dust that gathers in the hifi cabinet. Perhaps if I get a new one, it should have doors.

Once the new setup was all running I spent some time trying out various music, DVDs and Blu-ray to check out the sound. It sounds great — a huge improvement over the old system.

I’ve got both the Blu-ray player and the DVD player hooked up, as only the latter is multi-region, and we have a few out-of-region DVDs from the bad old days when some stuff wasn’t available locally.

I’ve installed the app on my Android phone and the iPad, and that seems to work well.

It’s got AirPlay, so I can play music out of iTunes, which is nifty. Theoretically you can also play music off an iPod via the USB port, but it appears my iPod is too ancient for that. Well, my current iPod. [grin]

I’m still figuring out the multitude of controls, but so far I’m very happy with it.

I’ll leave you with this explanation of some hi-fi terminology, from Smith And Jones:

1. Does anybody want some horrible old brown speakers and an old (but good) Technics receiver? I feel a Freecycle post coming on.

2. Lip sync is an issue with some setups, given picture processing in the TV takes more time than audio processing in the receiver. For now I’ve flicked the TV to Game Mode, which puts things back in sync but reduces the picture quality. I assume it’s generally better to use the audio delay feature of the Receiver? But wouldn’t I still need to turn that off and switch the TV back into Game Mode when playing games (with the Wii U signal via the Receiver)?

3. As I’m pondering a supplementary purchase to get radio and music into the kitchen (yes, I do have Sonos envy), does anybody know of a compact DAB radio which also does AirPlay? And if I set iTunes to Airplay to multiple devices, will they be in sync, or annoyingly just out of whack?

Updates: Edited the questions a bit.

I, too, went into the Good Guys in Brighton last month with $1000 in my pocket. The funds were spent. However, the wife walked out with a Dyson DC54 vacuum cleaner. D’oh!

Very nice, looks like the next model and generation up from the one I have. Mine’s a couple years old now, wondering if I could convince the CFO we need to upgrade…

I upgraded my 1980s Yamaha A/V amplifier for an RX-V373 a couple of years ago so I could plug in my newer HDMI stuff. Nice full-bodied sound even from my old speakers.

Just be careful if you update the firmware via internet. Does not work very well… Many functions stopped working. The guys at my Yamaha shop recommend firmware upgrades via usb

@Cameron, thanks, I’ll definitely bear that in mind!

The receiver should have a setting for delaying its sound output to match the time that the images are displayed on the screen. Give that a go.

And yes, those speakers in wood cabinets will be miles better than the tiny plastic boxes Yamaha also sells – those sound woeful.

Yes the receiver has a delay setting, which I’m sure is capable of getting audio/video back into sync while allowing the TV to do its thing improving the picture. Not sure if it’s per input, or a global setting. Better RTFM!

The issue I have is that I’ll want to invoke Game Mode when using the Wii U. When using the TV for switching inputs, this is easy, as just that one input can be set to Game Mode. With everything going through the Receiver first, I think I either need Receiver+TV on delay (for most things) or No Delay/Game Mode (for video games), which seems quite fiddly to turn everything on and off again.

What I might be able to do is push the Wii U output direct to the TV (using Game Mode for that input), and the sound from there via the TV’s Optical Out (it doesn’t have HDMI out) to the Receiver (which hopefully is smart enough not to use any delay setting when it’s getting audio from the TV).

I see I’m not the only one to ponder this issue! http://www.avsforum.com/forum/143-general-gaming-help/1452009-input-lag-receivers.html

I had a friend who is an audio engineer to help me set up my AV receiver and speakers recently and he said that LED TVs have quite a large delay compared to the sound. The HDMI auto lip-sync setting wasn’t working properly and I found a blu-ray disk of a movie ‘Not suitable for children’ that really showed up the problem (It also has the DTS demo sequence at the beginning that can really rattle the room).

As we didn’t have a proper calibration disk like DVE digital video essentials, he used a section in the disk with a good punchy expletive outburst that gave a good sync point (I supppse any sudden clapper board type sound with associated picture change would do). The Lip-sync only started to work properly when he pushed the delay to around the 50ms mark. It was very fiddly having to make an adjustment and then rewind the movie and check. He was not sure if there was a problem with audio track on the film but doing the calibration by hand made a big difference.

It does sound good. Like you actually are in a cinema.

I recently replaced my failing 9 year old TV with a 15 year old TV that one of the neighbours was throwing away for no good reason.

You could use a universal remote which will select the TV’s correct input for games and set up the sound receiver at the same time. That’s what I do, because I sometimes want to play a VHS tape and our VCR is plugged straight into the TV. One programmable remote handles control of all devices.

Daniel I would recommend you don’t connect your Wii U up like that. It only does surround through PCM which is uncompressed audio and therefore too much for an optical cable to do unlike compressed Dolby Digital or DTS (Dolby TrueHD and DTS MA that are on Blu-rays are also uncompressed and similarly HDMI-only) which are fine for optical. So it needs to be HDMI all the way unless you’ll only get two-channel sound.

Compare the Wii U Gamepad screen to your TV see if your TV without game mode is really having much delay at all. It probably isn’t much and unless you’re seriously playing fighting games or something it’s not too important even if there is a tiny delay. Otherwise the few extra button presses to turn on game mode each time you play can’t be too much of a hassle.

@Philip, thanks, I’ll investigate that.

This is the perfect home theatre (HT) system for a medium sized AV room. The speaker size is perfect and looks elegant. Sound output is quality amazing and setup is a breeze. Highly recommended if you looking for a HT system that won’t burn a hole in the wallet. I am enjoying this system with a blast.

The good guys will come down to $800 on them, bought one on the weekend. Great sound, very happy.

Ryan, was interested to know which Good Guys would sell this for $800?
Thanks

[…] sounds mucho-impressive on the Yamaha surround sound setup that I got in 2014, which I’m very very happy with. This unit does an awesome job with movies and TV, which was […]