Here’s an interesting issue with Myki which has always been around to an extent, but which has got worse with the switch to exact two-hour fares. 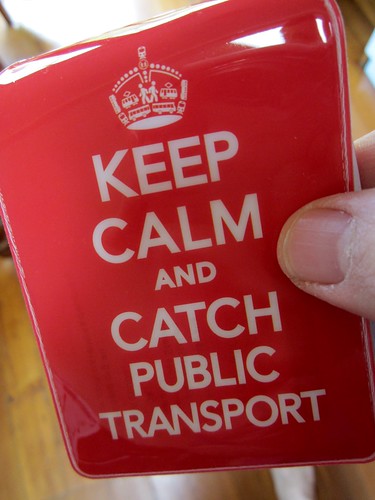 The Myki software uses the two hour expiry of a fare as the time after which it assumes the next touch of your card is also a new fare.

This implementation is in contrast to the fare rules, which say your fare lasts for as long as the trip, as long as you started it (touched-on) before the expiry date.

What should happen is you get charged a 2-hour zone 2 fare.

But because it’s more than 2-hours since you touched-on, the touch as you alight will be treated as another touch-on.

You’ll end up paying a default fare (zone 1+2 because that bus route eventually terminates in zone 1) for the original touch.

Plus if you don’t notice as you exit the bus that it’s touched you back on again, you’ll pay another zone 1 fare on top of that, because it will have assumed you travelled from Northland (zone 1/2 overlap) to Altona (zone 1), $3.58.

The silver lining is it’s not a very common scenario.

But it can happen, on some bus routes (such as the very long Smartbus routes), and on trains as well, where cross-town trips may take over two hours.

For trains, as you exit the station and touch, as long as you notice it’s touched you back on and charged a default two-zone fare, perhaps the easiest thing to do would be to wait 30 seconds, then touch-off again — invoking the “Change of mind” feature. The 30 seconds is so the reader doesn’t think you accidentally touched twice. You’re still charged the initial two zone fare, but that’s okay, because any conceivable trip of more than two hours would be a two zone fare — except perhaps if there was a long delay en route.

This isn’t possible for buses, because they have no “Change of mind feature”, and even if they did you might still be overcharged.

It’s also a bit tricky if an epic train trip ended at fare gates, perhaps at the end of the line at Frankston for example. Staff on the gates should be able to figure it out for you.

Squirrelled away in the bible, the Fares And Ticketing Manual, in a revision posted a couple of weeks ago, they suggest a solution to passengers affected by this:

If a customer using myki money does not touch off the myki within 2 hours after it was touched on, a default fare may be charged when the myki is next touched to a myki reader. Such a touch will also be treated as a touch on

To prevent this happening, a customer may touch off the myki prior to the end of a journey, but must then touch the myki on —

(a) in the case of a journey on a tram or a bus, immediately after the myki was touched off; or

(b) in the case of a journey on a train, before resuming the journey.

Presumably this advice is intended for staff to pass onto affected passengers — few Myki users would be aware of this, nor should they be expected to read the manual (but it’s good the manual exists, so that interested people can get this info).

If they’d thought about how the software might be used in the real world, then (at least on buses) they should be able to figure out that as you exit the bus after a long trip, you didn’t really magically travel to the end of the route (before the bus itself got there) and then board it again.

It’s a reminder that the implementation of Myki leaves a lot to be desired.

Is this a design fault, or is it the intent?

It is much like the travels I had on the orbital bus routes. Many times I caught the 901 from Melbourne Airport, all the way to Dandenong, when I go to touch off it says ‘touched on’. The same with the 902 once I reach Springvale from the full circle trip or two I have done on that.

Me is thinking that there must be a automatic ‘time out’ setting. Say the system on the bus would expect someone to only be travelling for say X distance, and would reset or clear its cache of touchons every so many kms or points it goes through.

@Jim, as per the blog post, the timeout is 2 hours after you touched-on.

Readers don’t have a “cache” of touch-ons. The information is kept on the card.

Buses have enough problems on short trips, wouldn’t want to try the smartbus orbital routes. I frequently keep getting charged a zone 2 fare getting on a 200/207 in Abbotsford heading into the city, which then means it uses myki money instead of my pass, putting me into to negative balance. Asked PTV at the Southern Cross hub and they were useless and said If i have problems I should talk to myki. Not really worth my time to chase up $2.48.

(sorry for the slightly off-topicness, but the system’s still got bugs all over the place)

So, the time is taken from when you touch on, regardless of cancelled services and extended delays because our public transport system leaves a lot to be desired sometimes??

The green touch-on devices, should be set with ‘the next departure time’. So, at least you can touch on at any time before the next service arrives, and you still get the same 2-hour time.

Perhaps we need some kind of an ‘instant dispute trigger device’ Perhaps turn those blue ones to include such a facility. I have a dispute, touch on the blue device, press a button to say ‘I dispute this transaction’ and wait for a review to be subjected to that event. This would need to be verified with CCTV camera footage to avoid fare evasion.

Again, under a competent operator, all of these bugs would have been sorted out in the first few weeks, or first month or two at the most.

In a properly designed system, faults like this would never have made it past the debugging stage. It’s a pretty good demonstration of why two hours should never have been the short-trip limit. Three hours was reasonable.

But really, when your card registers that it has scanned again on the exact same reader (or another reader on the same vehicle) that it was last scanned at, the system should default to doing a touch-off!! How hard can that be? Does the machine check such information on the card? Surely some kind of two-way communication is going on for the seemingly interminable duration of the scan??

On a tangent, one thing I was curious about is can a passenger travel on a zone 2 ticket if they are starting and finishing their journey in Zone 2 but have to go via zone 1? For example, what would the train fare be going from Frankston to Broadmeadows?

Next departure time validation would be prone to bugs and would be very hard where the barriers and/or readers are not platform specific.

@sean When travel from Broadmeadows to Frankston zone by train via city (or any zone one only station) will cost a zone 1 and 2 fare.