My precious Senz umbrella is gone. Left on the train to Frankston on Friday night.

We’d had a delicious dinner at Shakahari in Carlton. Good food and laughs galore, and caught a tram back to Flinders Street. The train had just gone — 20 minute wait, so we took a quick walk around Fed Square and the river. 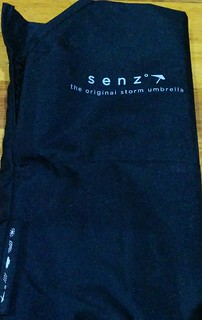 It started to rain, so the brolly came out. When we caught the 10:15 train, I put it under the seat.

20 seconds after getting off the train, I realised it had been left behind. I ran back but the train was leaving. Argh. If you recall how long it took me to find a good umbrella, you’ll understand my frustration.

@metrotrains Argh just left my umbrella on train. First carriage of 10:15 FSS to Frankston. Any chance of getting it back?

The Senz Mini had been good, but not actually 100% perfect. Last year one of the metal bits bent out of place. I contacted customer service, who asked to see a photo. They reckoned it was defective, and sent a free replacement. It was an improved model, and worked well. Until I left it behind that is.

Just off the train, I tweeted to Metro, not even knowing if there’d be a response. They replied pretty quickly and said they’d get someone at Frankston to check in the train when it arrived there, and gave me the number to ring after 11:30. Excellent.

I rang, and the bloke was very helpful, and said they’d checked, but couldn’t find it. As he pointed out, it was a rainy night, and someone else may have founded it and used it.

Metro let me know I could try Lost Property next week, it might turn up. Even if it never turns up, that’s great service from them, and I hope anybody, resources permitting, would get that kind of response on losing something on the train. (It does appear so.)

@danielbowen Hi Daniel, someone may hand it in, ring lost property next week on 9610 7512 between 8am to 5pm weekdays. Good luck.

Gunzels know about the Working Timetable (WTT). Squirreled away on Metro’s web site, it forms part of documents released to allow other train operators (such as freight carriers) to run trains on Metro’s tracks. The WTT shows every scheduled train service, including the ones that don’t take passengers. It also shows where a train goes when it finishes its run.

I had a plan: check the WTT, and see if the train I’d been on goes back into the city. Sure enough: the 10:15 Flinders Street to Frankston arrives at 11:17, and then at 11:25 departs back to Flinders Street, going through my station Bentleigh at 12:01am.

Yep, I was going to jump in and check, just in case they had missed the brolly under the seat. The timetable said if I rode the train one stop to Mckinnon, I’d only have 5 minutes wait for a train back.

I got down to Bentleigh station at about 11:55. The new realtime Passenger Information Display didn’t inspire confidence — it curiously said the next train to the city was at 12:17, and not taking passengers.

The PSOs asked if I wanted a citybound train. It was delayed, they said, and checked with the Metro staffer behind the counter, who said it was currently held at Mordialloc, for an unknown period.

It was all too hard. Wait for an indeterminate time for the Lost Brolly train, then again for a train back (or walk, possibly in the rain).

I thanked them and went home. I’ll try Lost Property during the week, but if it never turns up, I’ll get a replacement.

And hopefully whoever found it is able to make good use of it. It’s a great umbrella.

7 replies on “My precious umbrella is gone.”

” I put it under the seat.” D’oh! I made that mistake – once – and have never done that again.
Bad luck, hope it turns up.

Sorry about your umbrella.

Sounds like an indicident I had. About six months ago, I had picked up a parcel from the PO BOX in Oakleigh one morning. Commuting into the city with it, but I took an important call at Malvern and stepped off (I don’t like talking into a phone on the train). Of course, I had left the parcel on the train.

I mentally extrapolated what the train would do (run via the city loop), raced around to the platform 1 Frankston to City direct service. At Flinders Street, I bounded across to my ex-train and missed by 10 seconds. It was running back down to Pakenham.

I rang my wife to intercept the train at Huntingdale – told her exact carriage and seat. Just in case, I lodged a report at Lost Property at Flinders Street (incredibly helpful staffer there). Just as I was walking off to work, the staffer called me and said cleaners had picked it off the train and dropped it off at Lost Property. I had the parcel back inside 40 minutes. I also called my wife too to stand down … the train was just approaching Huntingdale when I got it back.

I lost my Senz umbrella too, a month or so ago. Had it when I left home to go to a farmers’ market, didn’t have it when I arrived home. Not sure whether I lost it at the market or on the bus.

Perhaps all the Senz umbrellas in Australia have decided to band together in a flock and migrate north for the winter.

I bought my Senz from The Good Store in Yarraville. I was going to go back there and get another one, but I checked their Facebook page and apparently they’ve closed. Now I have to find another another stockist.

I admire you for investing in a good umbrella. I just buy cheap fold-up umbrellas, and when they break or I lose them ….. no great loss! But perhaps I’m being irresponsible?

@Roger, given I didn’t have a spare bag to put it in, my thinking is the best place for a wet umbrella is under the seat.

@Bonnie, there seem to be a few more stockists now in Melbourne, though from a glance at two of them yesterday at lunch, Ende Peedia may still have the best range apart from ordering online: http://senzumbrellas.com.au/pages/stockists-australia-and-new-zealand

I am sad for your loss.

I left my umbrella on a train a few years ago, caught the next train to the terminus, and it was still there under the seat.

[…] I lost mine… and bought a newer model, the Senz Mini AO (the acronym standing for Auto Open, not Adults […]