As an occasional cyclist, nothing puts me off like feeling unsafe.

Bike lanes help me feel safer, but tend to fizzle out before intersections — just where many cyclists would consider that you need them the most.

It doesn’t have to be that way. Here’s a real life example of continuous bike lanes: the corner of Alma and Kooyong Roads, Caulfield North. 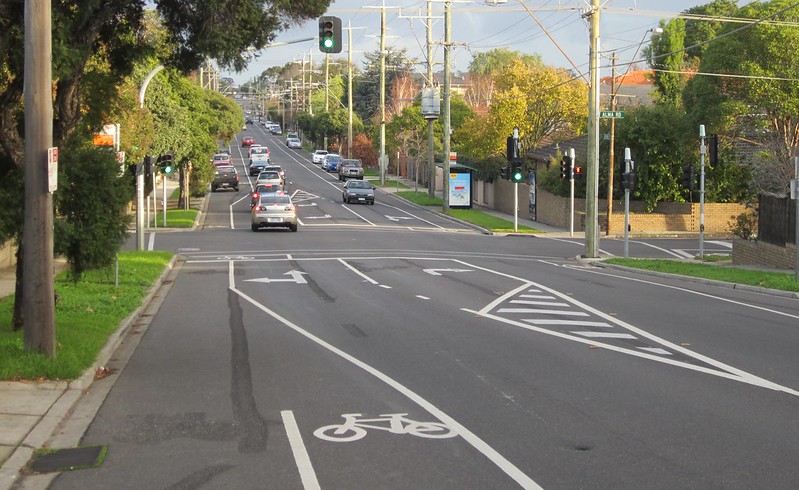 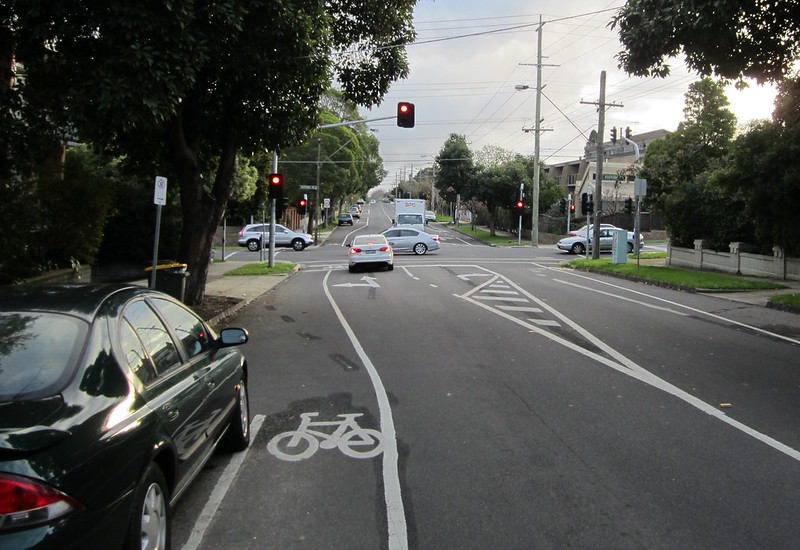 Maybe this isn’t news to some of you, but I don’t think I’ve seen a local intersection laid out like this before.

Someone somewhere has obviously decided that it’s okay if occasionally a pedestrian (or a cyclist) holds up a left-turning vehicle, in turn holding up vehicles going straight ahead.

You can’t have two lanes going straight ahead, because with the bike lanes there’s only room for three lanes (altogether).

But it shows that it is possible to provide bike lanes that don’t vanish when approaching an intersection.

Build bike lanes like these up into a continuous network and we might see a lot more cyclists.

14 replies on “Bike lanes that don’t disappear 50m before an intersection? Yes, it is possible.”

As a regular cyclist, it’s great to see cycle lanes not disappear at the most dangerous spots.
However, your statement that “it is possible …” is only true in those rare instances where the road is wide enough to accommodate BOTH a right turning lane AND a cycle lane. Most roads where built before even the former existed (that’s why traffic lanes at intersections are very squeezy when extra lane is added).
Also, left turning traffic crossing a cyclist going straight ahead is very dangerous and assumes the driver knows that a cyclist could potentially be on his/her left. many wouldn’t realise and many cyclists ride like Cadel Evans through intersection: CRUNCH!

Any cycle lane initiative that improves safety is a good thing, obviously. I was a mad keen cyclist, but since becoming a father, and having one too many close calls, I’ve lost my nerve. Just too many drivers drifting around these days as they fiddle with their smartphones. Bike lanes aren’t immune.

When I do ride, I take the back roads and cycle paths, and studiously avoid anything resembling a main road.

Melways directory makes it easy to work out who is responsible for a road. Black and red roads are VicRoads and the rest local council, but at times VicRoads contracts councils to maintain grass etc.

Definitely better than the bike lane disappearing (and the bike boxes help a bit), but yes, a green strip across the intersection might more strongly indicate to motorists that they need to look out for cyclists.

This is a good video:
https://www.youtube.com/watch?v=FlApbxLz6pA

But clearly that’s more of a major renovation.

@Alan: I don’t think this is different to any other intersection in that regard. according to vicroads, a left turning vehicle should “give way to bicycles when crossing into a bike lane”. (http://www.vicroads.vic.gov.au/Home/SafetyAndRules/RoadRules/Turning.htm)

What makes the situation different for this intersection?

@Alan & Simon – The road rules here are confused and VicRoads really needs to both correct inconsistencies, and get some public awareness campaigns happening because cars turning left and cutting off cyclists is one of the major causes of cyclist accidents.

Simon has already said this, but for clarification this page states: “Left turns
To make a left turn you must approach the intersection as close to the left side of the road as possible, but give way to bicycles when crossing into a bicycle lane. Where there is a slip lane, you must turn using the slip lane. But look out for cyclists on your left who may be going straight ahead.”

But this page states: “Left turning vehicle
Rule: A bike rider must not ride on the left side of a vehicle that is indicating left and turning at an intersection.
Tip: Stay in the traffic lane behind the turning vehicle.”

Daniel, thankfully more and more intersections are getting bike lanes right up to the intersection. In a few councils there are even a few spots with green paint and lane markings through the intersection. The city still has a long, long way to go to get bicycle infrastructure up to scratch.

Sorry about the stupid HTML formatting. Missed a bracket somewhere by the looks of things.

I think Alan meant at intersections without bike lanes and only general traffic lanes, in which case, yes, a cyclist is in the wrong if it goes to the left of a left-turning vehicle. But in the case that Daniel has shown in this blog article, I guess the bike lane is present so cars must check before turning, not that any would.

Personally, I always check my mirror before turning left, even if the cycle lane dissipated before it got to the intersection.

The “Dutch” idea for intersections that was shown in the video above, is interesting, and the concept for right turns (in Australia that is, left turns for them) acts sort of like a hook turn in the CBD. However, I can’t see it working when there are dedicated turning lanes for cars, with dedicated turning signals.

That is quite an old street. What is damning is the new Collins Street in Docklands has a tram line but no cycleway.

So let’s get this straight, the density is so high that it warrants a tram line, but not a cheap cycleway?

@James Adams, if you check out the link in the video, and the second video, you’ll quickly see that it does work just fine when there’s dedicated turning signals; indeed (translating to Australian terms) the second video http://www.youtube.com/watch?v=5HDN9fUlqU8 and the blog posts linked-to there, seem to indicate that it’s mostly used with a separately controlled left turns, whereas right-turning cars go at the same time as forward cars in the same lane. Of course, cars coming from the opposite direction are stopped at the same time. (Melbourne already has a number of intersections with similar traffic signal setups, where the traffic lights have an L shape: red yellow and green circles and a green right turn arrow, but no yellow right turn arrow.)

It sounds like it would work *very* well in Melbourne, especially at intersections with trams that aren’t wide-enough to have a separate right-turn lane (because in addition to bike safety, it would clear right-turning cars out of the way of the tram whenever the tram is able to move forward anyway). I’m rather convinced.

(Sorry I haven’t provided additional links, I’m worried about spam filters, but they’re easily available by going to the video already linked above.)

The worrying thing with slip lanes, is whether a car changing lanes to enter the slip lane ( exiting from the main road ) has to cross the path of a bicycle proceeding straight ahead.

Is this a case where the vehicle changing lanes, has to give way ?

Julian quotes: “Where there is a slip lane, you must turn using the slip lane. But look out for cyclists on your left who may be going straight ahead.”

Notice the words “look out for”. In the preceding sentence quoted, it is “give way to”.

There are many situations now, where cyclists are apparently supposed to deviate to the left, following the left hand side of the slip lane as it diverges away from the continuing road, and then stop and cross the slip lane at right angles. This transfers the obligation to give way, from the motorist to the cyclist.

In your post on Melbourne’s Draft Walking Plan, you mentioned the possibility of “pedestrian early starts”. Interestingly, at the Orrong Rd/Inkerman St intersection, not very far from the Kooyong/Alma intersection discussed above, pedestrian early starts have been introduced (although the button still has to be pressed to activate the green man). The traffic signals here have recently been updated (they previously had the only remaining old Walk/Don’t Walk lights that I was aware of). I haven’t checked whether this is another initiative of the City of Glen Eira or whether it’s a VicRoads thing.
As an aside, pedestrian early starts seem to be common in Perth.

Julian has nailed the problem above. The law is unclear. I understood it to be that if the light was green and the cars were moving, the cyclist had to let them go. But if the light was red and everyone was waiting, the cyclists get priority.
However, this situation is, in my view, more an issue of perceived than real risk. The dynamics of bikes and cars means the situation manages itself, mostly (which is probably why the law gets away with ambiguity.)

When the light is green, the car generally has more speed than the bike, so for two vehicles due to arrive at the intersection at once, the bike is visible and the driver generally just needs to tap the brakes to create space.
If the car can get to the intersection before the rider, the rider sees them woosh past and taps the brakes (possibly also gesticulates and swears). Running along in the driver’s blindspot all the way to the intersection is unusual because of the speed differential.
If a car hits you from the side, it’s not nearly so bad as being hit from behind or in front. It can force you off the road without knocking you down, some of the time. Or you get a chance to see whats happening and react/ down a bit at least. The speed at which a car moves sideways is a lot less than the speed it travels forward.
[Source: sideswiped on the corner of Toorak and Orrong Rd one morning].
The less perceived but bigger risk is cars coming the other way, turning right across you as you try to proceed straight. They may be less frequent but when one comes, it is more of a surprise because the closing speed is much much higher. That’s when you can die.

Nevertheless, perceived risk is a policy impediment to increased cycling, so the positive impact of treatments like this should not be underestimated.