One of the great things about Melbourne’s CBD (the Hoddle Grid) is that it’s so easily navigable. There are lots of parallel streets and laneways, so when walking around it’s pretty easy to take an alternative route, and still not get lost.

You can use this to avoid Chuggers.

Charity Muggers are notorious for getting in the way of pedestrians, desperately trying to get people to sign up for direct debits to charities, to the point of irritation.

As reported in the Herald Sun today, the City of Melbourne has decided to restrict Chuggers to 26 specified locations in Melbourne’s CBD. And they’ve published these locations on a map. 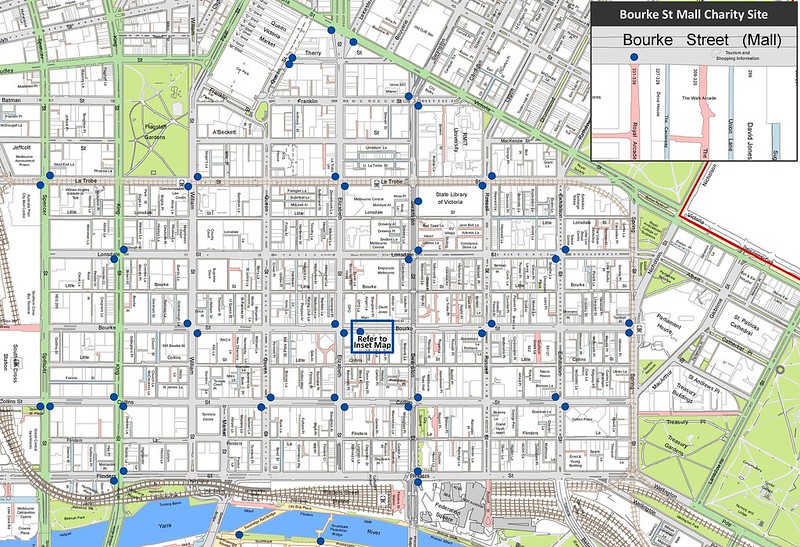 (See more detail in the full map, in PDF form)

Some of the spots seem a little unlikely — for instance Lonsdale and King Streets, in the middle of the CBD’s strip club district, where even at lunchtime there aren’t many pedestrians around.

Some don’t seem quite logical for other reasons. At Collins and King, I often see the Chuggers on the SW corner, as it has plenty of space. But the map dictates they use the SE and NW corners — the latter is quite constrained.

Each Registered Charity Organisation may apply to collect funds within the central city at six of the 26 specified locations per day, for a maximum of 40 days per year.

It’s not immediately clear to me if this will restrict other (non-Chugger) types of fundraising. Policies can be a bit of a blunt instrument. As seen when Metro decided to restrict them, then changed their minds, policymakers sometimes can’t seem to distinguish between Chuggers, whom many people find annoying, and more socially acceptable fundraising such as the Salvos, the RSL or Legacy asking for once-off donations of change. (Metro has since seen the light.)

Anyway, back to the map…

While it’d be impractical to memorise all the locations, if there are some on, say, your usual walk to lunch, and you’d rather not face an over-enthusiastic Chugger leaping around, trying to shake your hand, calling out to you in the street, or just generally getting in your face, then you can use this map to avoid them.

Chuggers are also increasingly found in the suburbs. Not sure they’re mapped anywhere — you’ll just have to use the other avoidance strategies: keep walking, don’t slow down. Smile or acknowledge but don’t engage otherwise — and certainly don’t shake hands with them if they offer.

Update January 2015: City of Melbourne has installed footpath markers in some or all locations where chuggers are permitted. 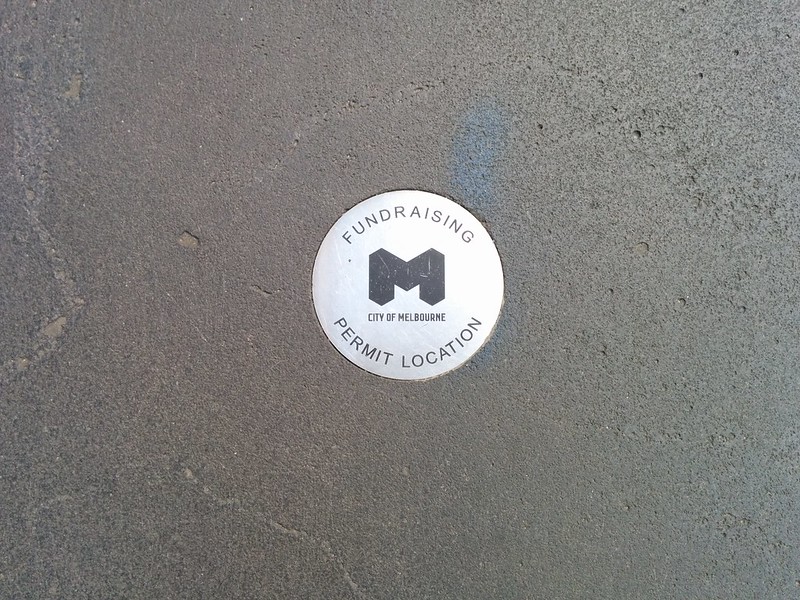 6 replies on “Want to avoid Chuggers? Now you can, with City of Melbourne’s handy map”

Bit tricky for me to avoid them if heading south, as I live on Elizabeth St near the GPO. However, the colonnade on the GPO building is handy, keeps you up and away from them and you can then either nip through H&M or drop down onto Bourke St past the danger zone. Remembering of course, there’s another chugger point in front of Royal Arcade (and I’ll bet the arcade’s tenants wouldn’t be happy with that).

Thanks for the map. I walk very quickly in the city so have gone past the charity folk before they can pounce.

my annoyance is chuggers who stand directly outside stations – just enough so they’re not technically IN the station and can’t get removed by metro. I’ve encountered them at the top of the steps out of Parliament station, chosen another exit to avoid them, and found them there too…they also regularly hang out across the street from Caulfield to get the Monash students. To avoid them you have to walk behind them through the busy car park.

@Charlotte, are they chuggers, or other people distributing advertising or collecting for charity? I’ve found chuggers either have permission to be in the station (as per Marcus’s blog post, which I linked to above), or are on street corners. Presumably the new regulations will limit them more than before, at least within the City of Melbourne.

The positioning on some of those corners means that if you have to walk in that direction, there is no possible way to avoid them. I wish I could vote in MCC elections; I would vote for any candidate to promised to remove them from the city completely.

Sure they’re annoying, but honestly a minor nuisance at worst. Just give a friendly “I’m good, thanks for asking” as you fail to break stride walking past them and then you no longer have a problem. If they do try to obstruct your path or anything I’ve found a “oh it sounds choice and I’d love to to help you out, but I’m from New Zealand bro” in a clearly fake Kiwi accent tends to disarm them also.