During my time involved with the PTUA, there’s been a policy to not comment on issues outside Victoria, for three main reasons:

So I was very surprised to discover some quotes of mine in the Sydney Daily Telegraph last week. 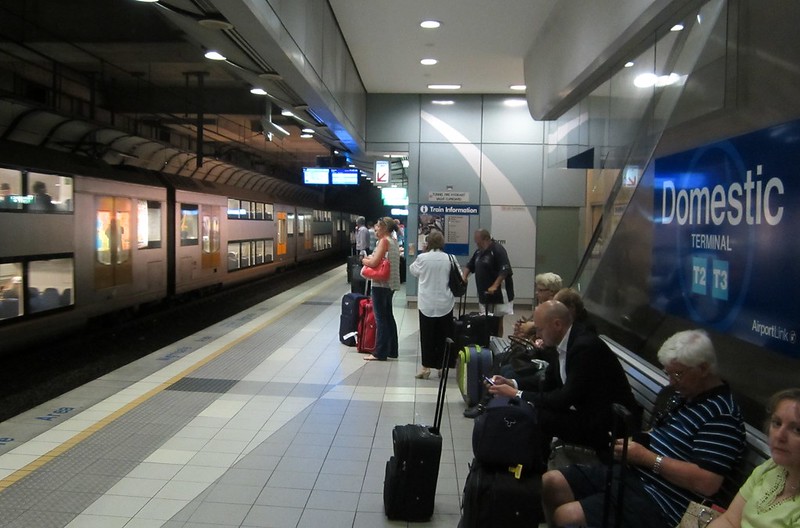 INCONSIDERATE travellers putting their feet up on train seats have been fined $48,000 in the past year.
…

Daniel Bowen, president of the Public Transport Users Association said it was “completely appropriate” for people to be penalised for placing their feet on seats, however he said more should be done to educate people it was an offence in the first place.

“It would certainly make sense to have an awareness campaign not only to warn people of the fine but to ­discourage people from engaging in anti-social behaviour in the first place,” Mr Bowen said.

I only found out about it because at least two Sydney radio stations contacted the PTUA wanting further comments (and specifically, audio quotes to use in their bulletins).

I hadn’t given quotes to the reporter, but they sounded vaguely familiar, so I did a bit of Googling and found them in a 2012 Age story.

The situation in Sydney is unclear to me. I know from the story that 480 people were fined in a year (a tiny amount compared to 17,592 people fined in Victoria in a year).

But the offence in Victoria includes (basically) putting your feet anywhere that isn’t the floor. Is that the same in Sydney? Is there signage in Sydney? Are there education campaigns in Sydney?

I don’t know, and the PTUA office received at least one grumpy email from a Sydneysider noting that the comments were uninformed. Well, yeah.

The interest from radio and from Sydney punters meant that PTUA volunteers had to spend time dealing with the fallout from two-year-old quotes copied out of context.

Some people suggested I contact Media Watch. So I did. 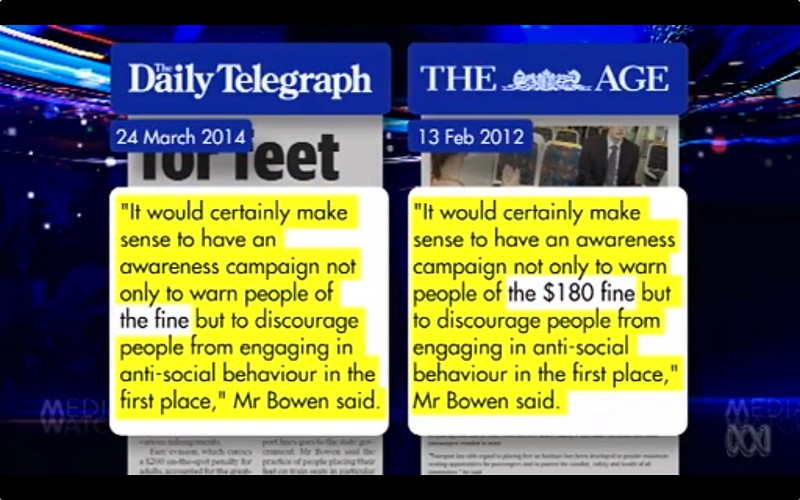 If you missed the story, it’s online here.

I should note that in no time in my dealing with the Melbourne media (including Daily Telegraph stablemate the Herald Sun) have I experienced anything this dodgy.

Update 14/4/2014: With thanks to Peter (see comments below), Crikey is reporting today that Phil Jacob has resigned from the Daily Telegraph after other instances of plagiarism came to light.

A Crikey investigation has uncovered a series of highly questionable articles published in The Daily Telegraph that appear to borrow — liberally and in some cases word-for-word — from reports in other publications.

The reports were all penned by Daily Telegraph state political reporter Phil Jacob, who was slapped down on the ABC’s Media Watch program two weeks ago for lifting quotes from a report in The Age to illustrate a story about rail commuters. But it appears this wasn’t the only time Jacob has lifted copy from stories other than his own.

12 replies on “The Daily Telegraph, the copied quotes, the problems they caused, and #MediaWatch”

Daniel
I saw media watch last night and when I heard your name mentioned screamed to my wife: “He’s the guy who has his whole life on the internet!” She thought your comments and the segment were enthralling. Well done.

It was never a particularly strong policy, at least, not during my time. We tended to give comments if we weren’t aware of a local group and/or if it was a broad rather than a local issue. Anyway, I wonder if the reporter concerned has extended an apology to you or the PTUA for the problems caused by his plagarism, misreporting and lazy journalism. It’s not uncommon for that to be part of the process of being ‘disciplined and counselled’.

I think Phil Jacob should spend less time preening in the mirror and more time earning his journalist’s wage. You represented yourself well on MW last night, notwitthstanding the fact you’ve been out of the role for a while!

Just as a quick comment on the actual issue, there is signage inside trains in Sydney, but as far as I know the offence is only putting feet on seats (not anywhere else). However, I believe the reason for the low number of fines is that there are *never* inspectors going around in trains. In almost four years since I moved from Melbourne, I never (never, ever) saw inspectors checking tickets (other than at stations). CityRail seems to have more employees than Metro at stations, and trains have multiple conductors… just no inspectors. Trains tend to be dirtier than in Melbourne, and I don’t think it’s a coincidence.

For the record, I would always trust Daniel over whomever in the SMH on matters like this.

@Vaughan, it became the default position not to comment on interstate matters around 2006ish when the media really started to take a great interest in transport issues (thus the media load increased markedly) and also we worked out that virtually every state and territory in Australia has a local group of some kind (the only one not covered I think is NT).

Yes, national issues and some discussion of Victoria issues interstate (as per an ABC702 Sydney discussion last Thursday night on the Victorian fare changes) by all means, but not issues with no relevance to Victoria.

I was watching media watch, but due to their annoying scheduling I switched channels about two minutes before it ended . Was your story at the end, or maybe I was not paying attention.

Feet on the seats is a chronic problem in sydney. Since becoming a curmudgeon, I often tell people off.

You would think that after disciplining the journalist involved, the Tele would want to correct or remove the article from its website.

Funny stuff Daniel. I like hearing your quotes in the default MW voice.

@tranzitjim – Don’t confuse the Sydney Daily Telegraph (SDT, Murdoch rag) with the Sydney Morning Herald (SMH, Fairfax). Neither are particularly good papers, but one is considerably better quality than the other.

According to today’s Crikey, Phil Jacob has ‘resigned’ from the Daily Telegraph, after quite a few instances of plaigarism came to light.