One of the issues in public transport is “dead running“. This blog post cites a local example, but it’s a widespread issue.

At various times of day, trams trains and buses move out of service between their runs and their depots or stabling.

This is dead running. 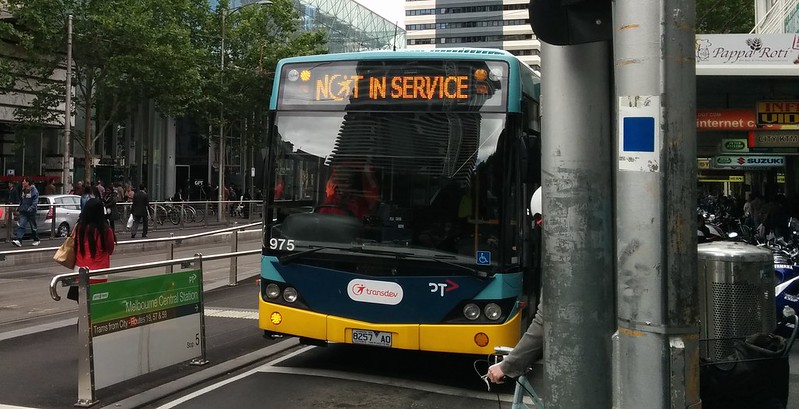 Sometimes this is taken to extremes. Most route 600/922/923 buses run out of a depot in Sandringham, but apparently because of lack of space, some buses run Out Of Service right across town to/from another depot in Footscray! (At least they did when the route was run by Melbourne Bus Link. It’s recently been taken over by TransDev, who may have changed it.)

My local route the 703 is run out of Ventura Buses’ South Oakleigh depot. The route runs from Brighton to Blackburn. In the 703’s case, Dead Running to and from Brighton is along the most direct road, which also happens to be along the route: Centre Road. I would think this is a pretty common scenario.

Thus we get sights like this: people in the morning peak waiting at Bentleigh station for a bus to Brighton… perhaps their bus is delayed thanks to the long run from Blackburn (troubleprone despite the theoretical traffic priority Smartbuses are meant to have). Often when a bus turns up, it’s going to Brighton all right, but it’s not in service — yes, they do dead running in peak hour. 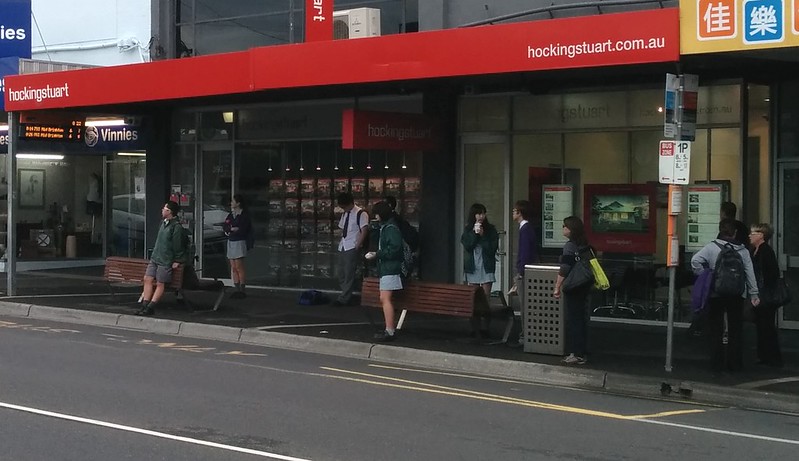 Likewise eastbound in the evenings there’s a big gap in the service between 7:33pm and 8:41pm… there’s a bus in between (at about 7:51) which runs out of service back to the depot.

The most obvious solution is to run more of these buses in service.

Stopping to pick up and drop off passengers would add to the run times of course, so you wouldn’t want to do it across the board — there will be times when it’s necessary to get vehicles to and from their runs as quickly as possible.

But if there are known gaps in the schedule, due to the timetable or regular delays, then it’d help those passengers a lot, even if it meant extending the run time slightly. Big benefit for little cost.

I was told some years ago by a senior bus planner that in regional cities, Myki had reduced the number of cash transactions on buses, and sped up run times — and that was before sales of individual tickets were scrapped. The silver lining in the cloud that is Myki is that we now have vastly reduced numbers of transactions on buses.

Theoretically bus run times should be faster now than in the Metcard days. And making Out Of Service buses run in service may make little difference to running times in many cases, thus almost no extra cost for those extra services.

It’s time those waiting passengers saw some benefit from that.

One additional consideration with adding extra travel time to formerly empty runs is driver shifts – if someone is borderline to their maximum number of hours, then the rosters might need a rework.

It may have its issues (and the removal of short term tickets is one of them) but Myki has been a godsend on regional buses. Infinitely better than the system it replaced.

I do enjoy never having to have cash any more to buy a ticket thanks to auto-topup. However I was on the 703 on Wednesday, someone got on and wanted to buy a ticket. We need short term tickets!

I use the 703 a lot between Bentleigh and Clayton. I often see an out of service bus heading east through Bentleigh around 4:30pm on weekdays. Gets me every time!

I am starting to see Myki’s being topped up on buses, which I didn’t realise you could do.

The faster run times seem to impact the “timetable resets” more these days, where buses dwell at predetermined stops for several minutes, as they are running early.

I’d say there’s even more of this since TransDev took over Melbourne Bus Link; I now see out-of-service buses from all over the place speeding around my suburb. Those buses sure seem to get up a pace when they’re empty.

Within the complexity of how our state government pays a private company to run a bus service and to make a profit for its owners or shareholders, wouldn’t the timetable instruction have to come from the government, that would have to pay something extra to run the out of service in service.

Given most trams running back to the depot are available to passengers, I don’t understand why the same can’t be done for buses. It’s clear enough – and such standard practice that Yarra Trams standardised the nomenclature (a ‘d’ after the route number) to indicate to passengers exactly how far that service will take you. Often it’s 5kms or so – more than enough for many trips.
The only problem is that these services don’t show up on TramTracker – and so often get missed (eg you start walking because you think there’s a tram 15 mins away, but actually a depot service is only 2 mins and you get caught mid-block).

The other problem (at least with the tram services) is often a depot service will run right behind a regular service. Delaying the depot run even 5 mins would help a lot in spreading service frequency, especially in shoulder (when most depot services run) and the average service frequency is 10-15+ mins apart.

One of my passions for improving public transport is, for buses to be fare taking the moment they depart from the depot, and remain so until the bus returns back to the depot.

Many bus depots do service areas of which are somewhat remote to any bus service, and the ad-hoc movement of depot workings should provide a major improvement to public transport in those areas.

** Some examples include **
Ryans brothers in Keilor park
Sita near Tottenham
Ventura Kannanook, could greatly improve the coverage between Kananook and Frankston

++Even if the bus must run express between route terminus and the depot to save on time
++Even if they only get one ticket sold, that should only work to add to revenue. Cost of that revenue is as good as nothing as you are operating the bus that way anyhow.

On the issue of Transdev, their Sandringham depot is meant to be moved out to Cheltenahm. Wonder what that would do for dead running?

@Dave – one difference with depot trams is that the depots themselves have to be located on tram routes, so the trams run somewhere useful – bus depots are often located out in the middle of nowhere in industrial estates, so at least part of the run is ‘off the network’ so to speak.

@Phil, is it the 216/219/220 buses then? Several times I’ve seen buses dead-running from the Gardenvale area all the way to Footscray.

One good one is on the DART routes, there are tens of empty trips per day between the CBD terminus and the depot in Doncaster East.

Even after the last in service bus leaves the city at 12am (or 9pm Sunday), there are still another 4 empty buses leaving the CBD for the depot!

@daniel, also I should point out half buses you see around gardenvale not in service, are not going to/from depot but are running special because of late running.