Here is another in my series of old photos from when I first got a digital camera.

M>Train (which came after Bayside trains, and before Connex) had a rather nice livery and logo. Here’s a Comeng train heading towards the city on the outer stretches of the Upfield line. Myself and Peter, another PTUA bod, had gone out there to look at the spot for the proposed Campbellfield Station… still not built. 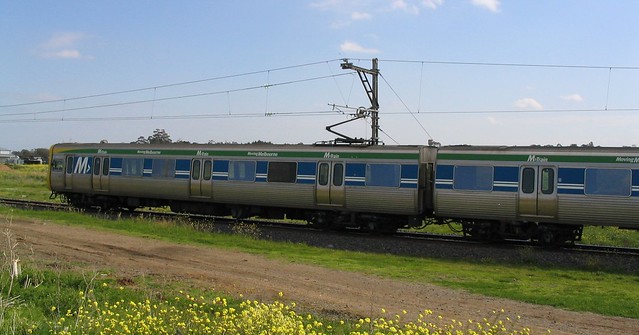 Daniel The Thinker. This was part of a bunch of pics I took for a possible animated web site menu I was pondering. It never happened. 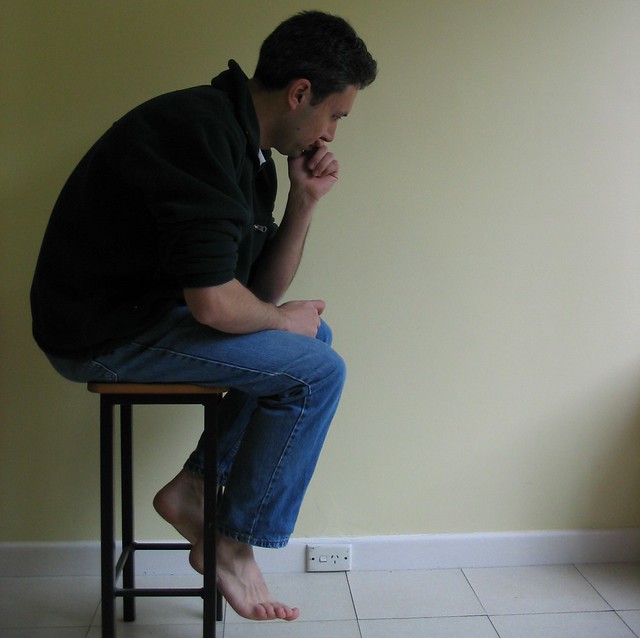 A screen grab from my first (I think) big media scrum for the PTUA. I think the topic was station staffing. Yes, they got my name wrong. Don’t believe everything you see on TV. 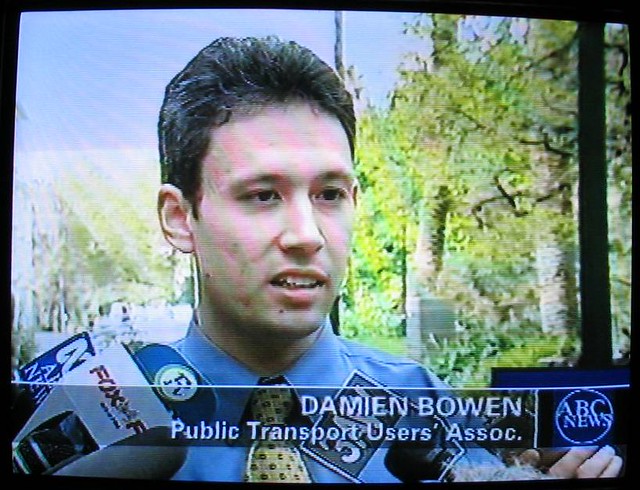 Sunset over the city, snapped up high in the building my day job was in at the time. 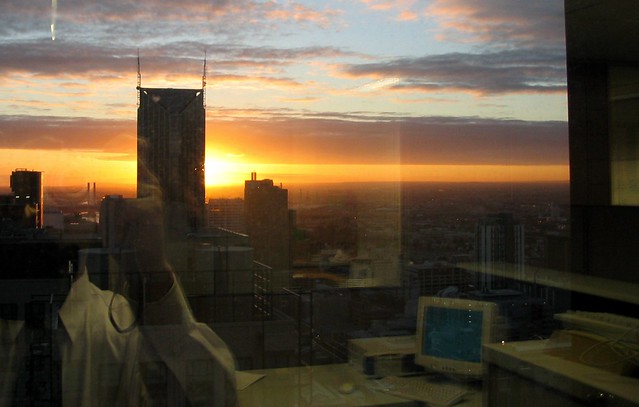 Do you remember when you could exit straight out of Melbourne Central, up to Swanston Street via a direct escalator, without having to navigate a maze of shops along the way? Ten years ago this month the plans to change it became public. 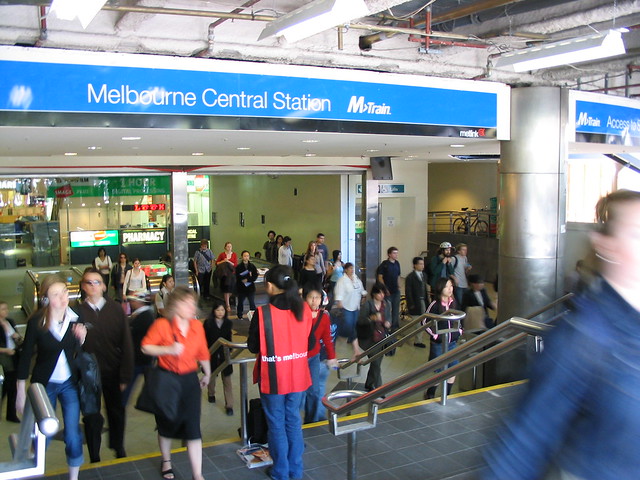 A view from the Rialto, south over the river. 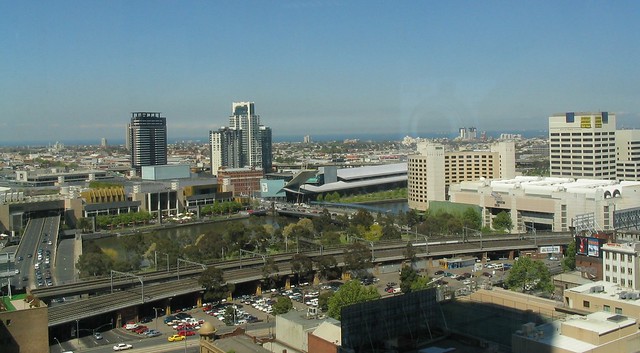 The Flinders Street overpass over King Street, since (thankfully) demolished. Look at all that precious riverside land used for car parking. (Some of it still is, mind you.) 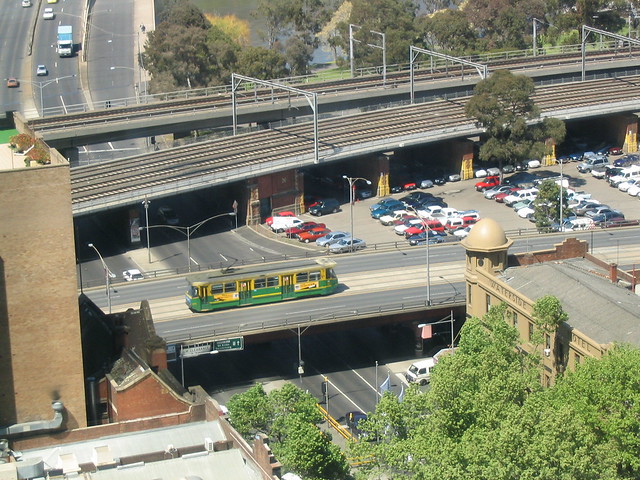 A 3-car Hitachi train, looking the worse for wear, rolls into Murrumbeena station. I assume the lead cab was normally in the middle of a 6-car set, and years of residue off the pantographs hadn’t been cleaned off properly. Within a year or two, most Hitachi trains would be prematurely scrapped, leading to overcrowded trains as patronage leapt up. 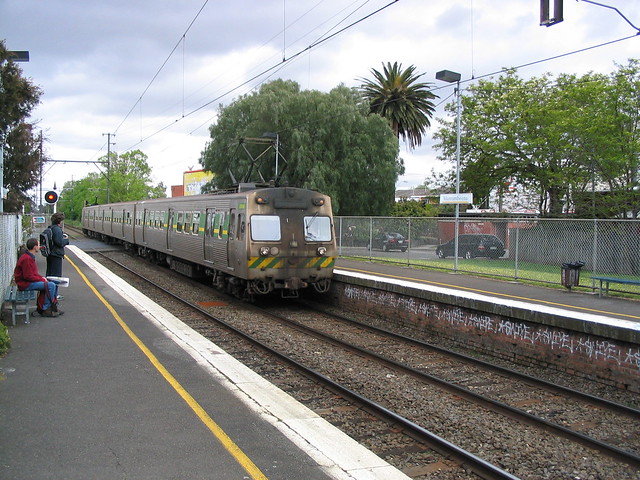 Whether the Hitachi trains were “prematurely scrapped” is debatable – they were replaced one-for-one by the air conditioned Xtrapolis and Siemens trains we now have running around.

The real issue was the nobody in charge was looking at patronage trends, and so they didn’t forsee the need to expand the existing fleet to handle it. They could have either kept the Hitachi trains around, or extended the orders of new trains to make up the numbers.

Daniel
what did you find so fascinating about the power point?

I never knew that there was once an overpass on Flinders St.

As I said back then, I said, they should of held onto a number of the Hitachi sets, for the purpose of ‘keeping hold of a ready fleet’ until the new stock have operated trouble free for a few years.

Who remembers the Siemens debarkle. We could have had a mothballed fleet of Hitachi trains to drag back into service.

Furthermore to that, the best time to ‘test a better frequency’ to see if that would attract more passengers is when you have a fleet replacement program. You hold onto the old stock for a few years, add their extra capacity to the timetables.

Should you then find that such an improvement of X extra services is a failure, you can then just turn around and scrap what remains of the old fleet. Otherwise, you would have clearly demonstrated as to why you need to buy more trains in the new order.

@Tranzit Jim, surely testing better frequencies is only that easy outside of peak hour. During peak hour, I thought signalling and junctions were the main limiting factor.

Yes Felix, you may be correct. I am not clear on the honest status of the signals and junctions, and happy to accept your word.

Only that the City Loop is at the limits of its signals, and we need to run more direct services. My understanding is, Flinders Street station is not so much of a blockage.

In any case, the current peak hour fleet can not be used to expand off peak runs, because many of them need to be out of service during the day, to perform repairs upon them.

I strongly advocate that on all lines, half the services need to run via the loop, and the other half to run direct or through the city.

By the way, I have changed my website from www . fight for smart bus .info to http://www.fight for rail .info

The Melbourne Central decision was an absolute shocker. It causes a massive problem at the all platforms escalators because almost none of the platform 3&4 traffic uses their dedicated escalators because they are aimed away from the ticket gates.

It also cuts the pedshed.

It should be undone ASAP.

Hitachi trains are still being used. You can see them at parked at Epping.

Still wearing a tie to work back then….. and look at your monitor….. pfffffttt!

@Jacob – Yes, but only because they held onto a handful, and then bought a bunch back from a previous buyer at greatly losses! Talk about short-sighted planning.