Half the gunzels in Melbourne are chattering about this: through the wonders of green screen and stock footage, the most recent episode of How I Met Your Mother (which aired last weekend in the USA, and on Thursday night in Australia) featured a Melbourne Comeng suburban train in Connex colours. 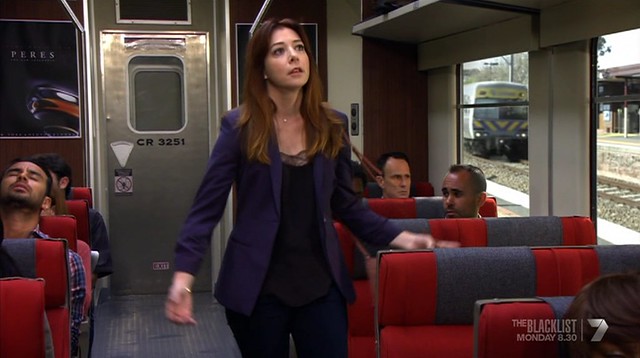 The stock footage appears to have been shot from another platform; it’s not necessarily a 3+ platform station. The building seems to be one of Melbourne’s newer ones; probably the “down” (away from the city) platform, but as-yet I haven’t been able to identify it. Anybody want to have a go?

Update Sunday 9:45pm: I think I’ve worked it out. Will be interested to see if anybody reaches the same answer I did.

The answer is… Brighton Beach

Update Monday 12:30pm: Rather than spend hours scouring the net for pictures of stations and doing painstaking comparisons, I thought about this laterally.

As Stephen said in the comments, the question is why is a Melbourne train in a US TV show? It’s stock footage – someone’s needed to save time and/or money in getting footage of a moving train to put on the green screen, and they’ve looked through available footage for something that matches the studio shot they were setting up.

So I did a quick bit of searching stock footage web sites to see if I could find it. And I found it – 23 seconds of glorious 16:9 HD vision, shot at Brighton Beach:

The HIMYM producers have cropped it and carefully placed it in the completed programme to mostly hide the people on the platform, but if you look closely, it’s a match.

20 replies on “Yes, that was a Melbourne train in a US sitcom… but can anybody name the station?”

It’s definitely not a three track station; you can see the other platform at about four seconds in the bottom of the window. It’s waaay too close to the window to have a full island platform.

It reminds me of Noble Park station, but that’s probably just because I only know that many stations.

Heyington. The background trees and the spacing of the tracks between the platforms strongly suggests so.

Why would a US show, or a US studio, need to have footage of a non US railway?

Arh, does anyone know what the type of train is, they are sitting in?

Ok, I just had to let people know, in the UK forums, some AU forums and facebook groups.

Hope Daniel does not mind the publicity.

My head can’t get passed Alphington. Definitely looks like a station on the Clifton Hill or Burnley group however but my brain could still be hungover from Grand Final beers.

I agree with Felix,I reckon its Noble park

It is not Heyington. Heyington has a light coloured wooden station but the station in the photograph has a brown brick station.

I can see no evidence of another platform. My guess is Ashburton.

@Nathan, there are a number of stations on various lines with similar building structures.

@Tom, look closely. The second platform is very visible if you look at the bottom of the view out of the train’s windows.

Other suggestions people have raised to me include Surrey Hills and Mount Waverley.

But I think I’ve figured it out. Be interested to see if anybody works it out.

Kinda reminds me of Mount Waverley too, but there is no fence.
Perhaps Darling or Gardiner?

And it begs the question…….err…..why use Melbourne stock footage?

Best theory I’ve seen is that it’s Hampton – both because it looks like it, and because Lily is headed to the Hamptons so it’s plausible that whoever was searching for appropriate stock footage mistook it for the Long Island one.

No idea as to the station. As to why Melbourne – they would probably have been simply matching camera angles to clips in a library and found this the best fit. It may also have looked less obviously “wrong” to Americans than a more recognisable train from a different US region (though I imagine that would be a secondary consideration, if at all).

Mckinnon, or heyington or any other station along the glen waverly line, such as darling or east malvern.

I dont know if anyone else noticed, but the train in american movie knowing was a hitachi. Search knowing train crash in utube and ul see. Another idea, that station bonbeach edithvale or aspendale

Those trains in that film may well be of Hitachi design but they are not Melbourne Hitachis.

@declan and @Tom the first and best

The Nicholas Cage film ‘Knowing’ was filmed in Melbourne, and an out of service Hitachi train in the Steamrail depot at Newport was used in the filming:

Well research, Daniel. I’m rapped that my local station was used in the TV show.