I found myself at a party recently chatting about public transport. Not just late trains and packed trams, but specifically buses.

Who said buses aren’t interesting to anybody? 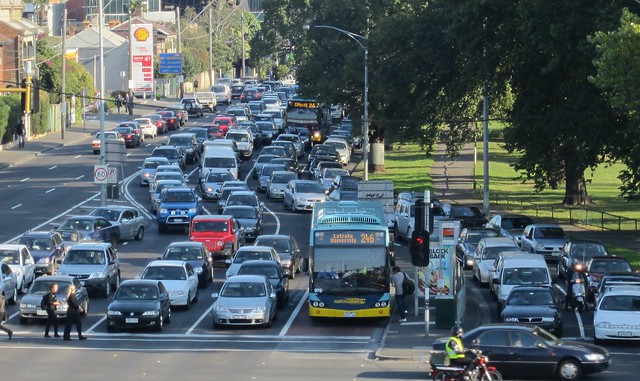 It was in the broader context of sustainable transport in the inner-north, but one of the anecdotal snippets was this: one of the people I was chatting to lives in Brunswick and has a friend in the Edgewater estate at Maribyrnong. While she is an avid cyclist (rides every day to work in the university district), when she goes visiting this friend, she inevitably drives (about 15 minutes), because the cycling routes are limited (and not very flat), and it’s not really viable to do the trip by public transport either.

For trips like this by public transport, buses are the only option. Inner-city orbital routes like this aren’t going to have trains any time soon, and while there are three orbital tram routes, more are unlikely.

The problem is that, as we all know, buses of are the poor cousin in Melbourne. They are often infrequent, and have shorter operating hours than the other modes. While weekend trains typically run every 10-20 minutes, and trams every 8-15, most buses get nowhere near that.

And we wonder why crosstown road routes like Alexandra Parade get congested. Even for short trips (most Alexandra Parade trips aren’t a full east-west journey that would be helped by the proposed tunnel), the parallel PT routes — all buses — are hopeless:

The 57 tram and 402 bus are also in that area, and aren’t too bad most of the time, but aren’t really crosstown routes; they both originate in or on the edge of the CBD.

While people will gravitate towards the most usable services (just as motorists often gravitate towards arterial roads and freeways), unfortunately it’s not as simple as merging all those infrequent routes from a vast geographical area into one single frequent service and expecting people to use it. Some consolidation can help, but you still need a usable grid of frequent services, within say 400-800 metres of trip sources and destinations.

The patronage growth on more frequent orbital Smartbus services shows there is huge potential for more people to make this kind of trip by public transport if decent services are provided.

In fact, one of the orbital Smartbus routes – the Blue orbital – would have just about served the very trip from Brunswick to Maribyrnong we were discussing. The Blue orbital was proposed by Labor, but they never implemented it. The plan — as with the other Smartbus routes — was it would have combined several existing routes, adding in service upgrades, to provide an option for cross-suburban travel in the inner-suburbs, avoiding having to go into the city and out again.

My reading of the old maps is that the Blue Orbital would have run from Brighton to Elsternwick (the existing 216/219), then along Punt Road to Clifton Hill (the 246), then west through Brunswick to Moonee Ponds (the 508), then heading to Highpoint and then replacing part of the 223 to Footscray (including just about passing within walking distance of Edgewater) and then replacing the 472 through Yarraville and Newport to Williamstown.

I actually think the Brighton end would not have been that useful — just as the plentiful 216/219/600/922/923 buses are now, it would have been unused. But the section from Elsternwick to Footscray would, I think, have been a great investment in assisting with more cross-suburban trips. (Though I expect it would be a longer-than-necessary trip from Brunswick to Maribyrnong.)

If long orbital routes won’t be provided, then at least the existing shorter routes need to be made more frequent and direct. There’s no real reason, for instance, they couldn’t be as frequent on weekends as they are on weekdays. The buses are available.

Reform of routes, rationalising and straightening them out to run direct instead of all over the place, would also help run faster more frequent buses — you know, the sorts of services people will actually use.

PTV are actually working on such a plan. While they haven’t yet release a plan for bus routes, word is a bus and tram plan is in preparation. As their demand forecast report flags, bus routes will be re-organised into four categories: Smartbus (up to every 10 minutes), Direct (up to every 15 minutes, running along arterial roads), Coverage (hourly, serving local neighbourhoods, and targeted at people who don’t want to walk a distance to high-frequency services) and Inter-town (hourly, connecting rural-fringe areas to outer-suburban Melbourne).

This is good. The current bus network is a mess — some areas have frequent service simply because they used to have trams, but terminate short of logical traffic generators; some routes that should be primary connections into major centres take ages to get anywhere because they go through backstreets.

They also need traffic priority measures so they don’t get stuck in heavy traffic, as shown in the Punt Road photo above, where one 246 has caught up to another.

Restructuring the network into a grid of more frequent services will help a lot to provide a more usable public transport network overall.

And it’s not necessarily terribly expensive. Buses now crawling through suburban backstreets can run more efficiently if they stick to main roads.

But some extra funds will be needed. Will they get the money they need? The government’s big push on the East-West link has once again highlighted cross-city transport, but if it gets up, swallowing a decade of transport funding, and the only practical option for many of these trips remains driving, then roads will continue to be clogged.

Absolutely a huge issue. As I’ve pointed out a number of times, this inner-north-west area places in stark relief the irrational apartheid that still exists between tram planning and bus planning. If you compare the bus frequencies above with the frequencies of the north-south tram routes, you soon enough find that the *least* frequent tram is still more frequent than the most frequent bus.

Those east-west buses across Moonee Valley, Moreland and Darebin could actually provide a really good network in conjunction with the north-south trams, but the low frequencies kill it currently.

As the author of ‘FightForSmartBus.info’ I absolutely support the introduction of many new SmartBus routes, including the 904.

The only difference in on-bus technology between a SmartBus and all other suburban buses, is the inside PIDS which shows the name of the next stop.

I would suggest that all buses be upgraded with all buses getting that internal PIDS as that, and have all the bus units themselves operate across all bus routes, and all buses with the one same logo/livery.

RE 904,
My understanding is that the 904 is to replace the 246 between Clifton Hill and Elsternwick, and at one stage it was meant to replace the 600 south from Brighton.

Also, I have been recently informed that the 904 may never happen. We need to start a combined pressure on those in power, to say ‘it is now time for the 904’.

Don`t forget the western section of the 903 has not been implemented. That needs to happen asap as well. Electrifying the Melton line would be useful for that section as well as it passes Deer Park. How well it would connect to Watergardens/Sydneham station needs to be asked as well.

This is precisely the topic I want to write my thesis on next year. Glad to hear PTV are currently working on the problem, it seems like the implementation of PTV is actually bringing some results, despite not being the optimal solution many of us had lobbied for.

Sounds like PTV is largely basing its concepts on the Walker-inspired Canberra bus network reforms of recent years.

They have the benefit of both improving day-to-day operation and outlining longer term planning/urban design around which corridors will get frequent/direct, and which will stay as coverage, too.

Better faster streets for buses, yet the bus route has been stolen from you local street. It is a hard call.

Daniel, the 901 bus doesn’t go down Mickleham Rd as shown in your map.

It goes down Pascoe Vale Rd.

@Andrew – I don’t think losing the bus from your street is a hard call if another 1-200m away there’s a direct bus, with good connections, that arrives at double or quadruple the frequency of the meandering local.

If the local bus is being removed without replacement, then not so good.

We probably could move to that model Philip, but i’m not sure that it brings about huge efficiencies. Would need to procure a special fleet of smaller buses for the task. And it still takes one driver to drive a bus, regardless of size…

@Andrew – If the choice is between a service that arrives irregularly (say ever 43 minutes) and infrequently and takes a long time to travel to any given destination and a service that operates regularly and frequently and travels directly and quickly, I’m sure you’ll find that in the vast majority of scenarios you’ll be better off with the latter regardless of whether the bus stop is outside your house or 500m away, around the corner.

@Philip – Small buses offer bus operators only marginal savings. In a first world country the largest component of a bus operators cost is in driver wages, (this is especially true in Australia where wages are very high). Smaller buses therefore offer only marginal savings, whilst sacrificing considerable flexibility (a big bus can carry 2 passengers easily, but a small bus can’t carry 80 passengers).

Hopefully we get see some changes for routes Trsnsdev runs, there is lot of potential. With certain routes or sections that can be cut and buses reused where need. Cutting 216/219 south elsternwick is example of one thing could cut.

And now for something completely different:

The recommendation for the Eddington Report for the Doncaster line was to the run the buses out to that suburb on a “tram like frequency”.

Coming home from Oakleigh in the evening I have used the 900 bus a few times and would have used it more if it went more than once every 30 minutes. It runs straight to Caulfield Station via Chadstone Shopping Centre and is usually fairly empty.

Going out to the zone 2 suburbs you are more likely to get a bus also.

The I get the most regularly in the inner city is the 246 bus up Punt Rd if I am going to Johnston St or Northcote from home as you cut out a trip to the CBD, which can be not pleasant on weekends at night.

My personal view is that the blue orbital should be introduced but after Elsternwick, it should continue via Rusden Street and Nepean Highway to Mentone. Nepean Highway is a missing link in the public transport network despite being part of the PPTN (if they still have the PPTN that is). It would link up quite a few other routes and serve Southland.