The entire country converted to Compact Fluorescent Light-globes years ago, which is great, as they use much less energy and have a longer life.

Well, if you use them properly. For instance I don’t use CFLs in the bathroom/toilet, as these lights are generally on for short periods of time, and CFLs are better when used for 15 minutes or longer.

And the greenhouse gas reduction might be overstated – this Wikipedia article reckons it has resulted in a total nationwide GHG reduction of just 0.14%. 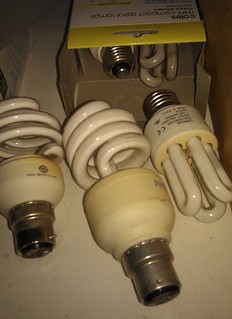 The real problem is there seems to be no well-organised way to dispose of them safely. You’re not meant to just chuck them into landfill because they have a small amount of mercury inside them.

Proper disposal locations are few and far between, and a lot of the information available on safe disposal relates to fluorescent tubes, not CFLs. Or it’s clearly at commercial disposals, not households.

Some companies that sell CFLs are also involved in their disposal. I seem to recall both Ikea and Aldi advertising that they’d take them in the past, but I don’t recall actually seeing a collection bin in their stores.

More recently, apparently Ikea has said they’ll only sell LEDs by 2016 — this would be even better than CFLs, as they last even longer, and don’t have any hazardous chemicals.

So, how to get rid of them?

I asked my local council what their position was on CFL disposals. Their reply included a number of web links, the best one being Sustainability Victoria’s A to Z of household chemical waste disposal.

This lists a number of permanent and mobile collection points, the closest one to me being the Monash Waste Transfer and Recycling Station in Notting Hill. They will take CFLs for free, provided they are separated from any other stuff you’re dropping off (charges apply for most other types of waste).

This is fine for me, I can stockpile dead CFLs and take them there once every year or two, but really it’s pretty poor for something now used in most households.

How many people just chuck them into regular garbage because they don’t know?

And how many people would find it impractical to get to a drop off point, for instance because they don’t have a car?

A follow-up from the council said they’re investigating more collection points – not kerbside, but bins at places such as libraries and other council facilities. That could work quite well, but of course, part of the problem here is that there’s no nationwide, or even statewide approach.

Witness hard rubbish – with some councils doing scheduled pickups and some doing booked pickups, the different methods across parts of Melbourne means that confusion reigns. In Glen Eira, if you book a collection and put your stuff out, half the time your neighbours will put stuff out as well, thinking an area-wide collection is coming.

The other thing the council said is that apparently a scheme involving manufacturers/importers is being considered, but that sounds like it would require Federal legislation, so it could be years away.

Until an easy, consistent method is provided for disposing of CFLs, you can bet most people won’t be getting rid of them properly.

Or maybe it’s time we all moved to LEDs.

Guilty! I had no idea that you couldn’t just chuck them out in the garbage. Thanks for letting everyone know.

I should start a tungsten bootlegging movement. Have backyard operations where Edison light bulbs are made.

It is much better to have a heavy tax on “inefficient” light bulbs than the communist ban we have now.

Certain size bulbs are exempt from the ban anyway!

This problem should solve itself in a couple of years. CFLs were well made when they were first introduced, but they were $25 each. Now they’re $4 each and the manufacturers have worked out how to make them poorly enough that they will last only 18 months. They are bright when first used, but grow dimmer after a few weeks and are hard to live with after a few months.

Fortunately, LEDs are getting cheaper and better all the time. I expect they will also be engineered to fail after a year or so because that’s simply how the manufacturing industry works, but they should perform consistently for their entire lifespan and are certainly easier to dispose of.

I have ceased buying CFLs for my house because the latest batches have broken so quickly. I now buy halogens built into incandescent-shaped bulbs. They’re so much better to live with than CFLs that I don’t care about them using five times the power. Five times 11 watts is still only 55 watts and will light up a bathroom quite nicely.

Thanks for this post Daniel. I didn’t know these had to be disposed of in a particular way!

If you’re on the Norf Side, in Moreland you can take CFLs (and batteries like AAs, Ds, buttons etc) to one of their civic centres: 90 Bell St Coburg (at council office), 233 Sydney Rd Brunswick (at brunswick town hall). There’s a lot of detail in their web site about what to do with what. These are easy to get to by public transport!

The City of Yarra takes them at their Clifton Hill recycling depot in Roseneath St, where they take a heap of other stuff too, and you can get free mulch.

I find that LEDs are shiny/bright/dazzling, but they don’t give off much light, if that makes sense.

I would think that only a small percentage of CFLs get disposed of properly and that the rest end up in the regular rubbish. Even if people do know that they have special disposal recommendations they are likely to just throw them away with their household or workplace rubbish anyway because just as you say there is no easy option to dispose of them properly. This goes for batteries too.

I use CFLs and most of them tend to last much longer than regular bulbs but sometimes a “dud” CFL will have a short life. I buy warm white CFLs as their light is similiar to a regular incandesent bulb. The cool white ones have a light better suited to a warehouse than a living room. One has to check the package carefully to be sure they are buying the right color bulb. Being American I have also made the mistake of not making sure that I bought bayonet bulbs for the sockets in my apartment instead of the Edison (screw) base bulbs sold next to them. There is no such thing as a bayonet bulb or socket in the US so no need to remember to check the bulb’s base in the store there. I had a “you know you’re an American in Australia” moment up on a step ladder in my living room once with a new Edison base bulb in my hand and bayonet socket to put it in. I had to go back to the store to exchange them.

LED bulbs last much longer and use even less power but they are still relatively expensive and I have not bought any yet. Their light used to be a bit harsh and blue but the new ones have light very similiar to a regular bulb or CFL.

The advice I’ve had is that households can dispose of them with the landfill rubbish (wrapped in paper), but businesses with commercial quantities of CFLs should endeavour to take them to a recycling centre.
http://recyclingnearyou.com.au/light-globes/MelbourneVIC

@Michael, the advice on that link about landfill refers to incandescent globes, not CFLs.

This whole mercury problem is a crock. There is more mercury in your fruit and vegetables than there is in a CFL.