The government argues that cross-city traffic is so critical that the they want to (without a mandate) spend $8 billion building just the first phase of the East-West tunnel.

If that’s the case, then why does the newly remodelled (2008-2010) M1 corridor only provide two lanes in each direction for those cross-city trips?

Eastbound (coming off the Westgate bridge, towards the Burnley tunnel): 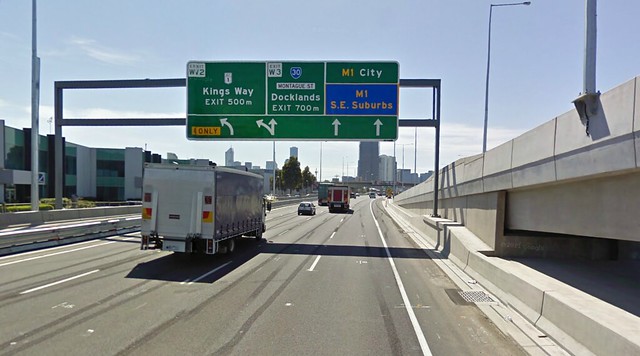 Westbound (coming out of the Domain tunnel, towards the Westgate Bridge): 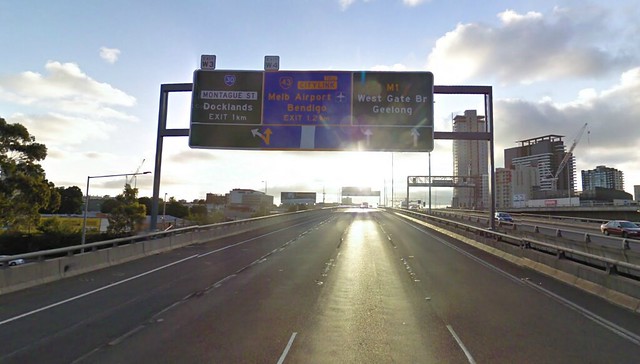 …and another westbound view from a bit further on, where the lanes merge down to two: 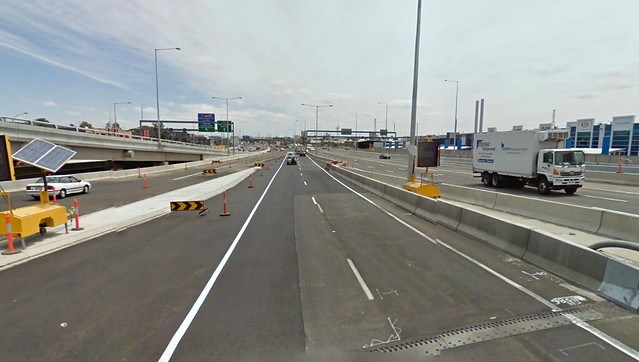 These pictures are all from Google Streetview, and actually show the freeway towards the end of the modifications… I’ve checked, and this is how it is today.

Road designers aren’t idiots. When they do massive remodelling like this to re-organise the lanes, they look at traffic flows. The Westgate bridge is now 5 lanes in each direction, and the Citylink tunnels are 3 each, but there are only 2 through lanes each way.

That leaves the conclusion that the traffic going from the east to the west and vice-versa is only a small proportion of the total traffic, particularly compared to numbers going over the Westgate.

Update Tuesday: I’ve had some feedback on this post (not via comments) to the effect that some thing this is twisting the truth, because various lanes leave and join the motorway along its length, so the total number of lanes at any one point is always more than 2. That’s true, but my point is that (particularly in congested conditions), the capacity of the M1 for east to west cross-city traffic is heavily influenced by the number of lanes that go all the way through… and this is only two lanes each way.

One person also pointed out an additional lane is available westbound via the Todd Road exit and the service station… but I would think it’s unlikely many drivers going from the east to the west would use this — plus I think it involves a merge with traffic from Kingsway and another from the Bolte Bridge southbound.

5 replies on “If east-west traffic is so critical, why does the M1 only provide 2 through lanes each way?”

My theory of the proposed tunnel being primarily for freight trucks and to sop up a few votes in eastern marginals may or may not be correct, but the tunnel seems to be becoming a liability for Napthine and his government.

I am surprised the Greens vote hasnt gone up now that most people want PT projects instead of toll roads.

When i was a teenager i used to think every main road should be a motorway or have underpasses along it like Old Windsor Rd, Sydney and South Rd, Adelaide do.

I used to think CityLink is a great project, but within 10 years of it opening, it became full and underwent $1b of upgrades. Now it is full again.

Now i know motorways are a money pit and not everyone has a car!

For the sake of justice and financial prudence we need PT investment and cycleways.

From what I’ve learnt in traffic management at uni, the main reason that we are meant to provide many lanes for exiting traffic in areas such as the city is to prevent “spillback”.

Here is what I mean:
Let’s say a traffic light is green for 60 seconds and then red for 60 seconds (simple assumption), and you can have 30 cars per lane travel through the intersection per green light phase (it is actually less than this). More lanes means more cars can fit in through each traffic light cycle, so a 3 lane exit will mean that 90 cars can exit every 2 minutes.

If there isn’t enough lanes, or isn’t enough cars exiting a freeway, it then “spills back” onto the freeway, and you have people queuing to exit, thus causing more delays, and not just to those exiting, but to everyone using the freeway. However, a lot of land has to be used for interchanges.

Exiting lanes are generally half the capacity of through lanes because of this. Maybe if we have to have motorways, then we need a smarter interchange design. Or encourage more people to use PT, as this is clearly a non-issue for a train.

Where you have a simple cross roads with basic type traffic lights, for both directions to get equal time,

As one direction changes from green to red, it spends time in Yellow, then it needs to stay red for a few seconds before the other direction can get their green.

There shall always be a stage when ‘both are on red’ in each cycle, but never are they both on green.

It’s all part of the scam. All the freeways are built with 2 lanes, and then upgraded to three lanes later, at stupendous expense and profits to the contractors. It would be cheaper to build 3 lanes and be done with it.

A lot of the main roads vary between 2 and 3 lanes. And then people complain that other people won’t “keep left unless overtaking”. it doesn’t take much driving in Australia to realise that using the left lane is for idiots because it isn’t continuous.