A couple of years ago I wrote about Nissan Micra ads at Flinders Street Station directly criticising public transport.

This time, it’s Kia’s turn, though it’s a little less overt. Spotted at Malvern (as well as other locations, such as South Yarra): 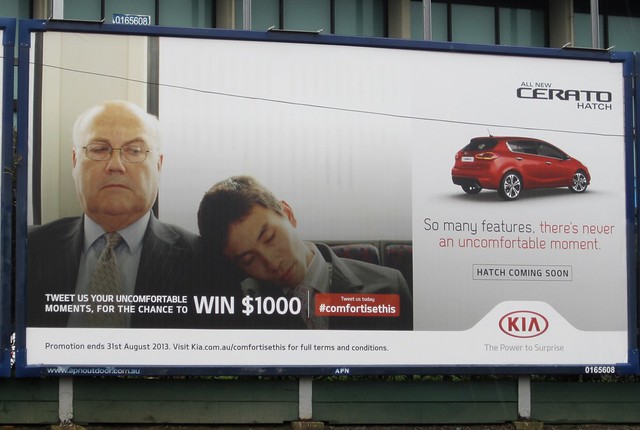 You know, I’ve been using public transport for decades. I’ve seen people asleep, but I’ve never, ever had someone fall asleep on my shoulder. Does it really happen, or is it just a cliché? 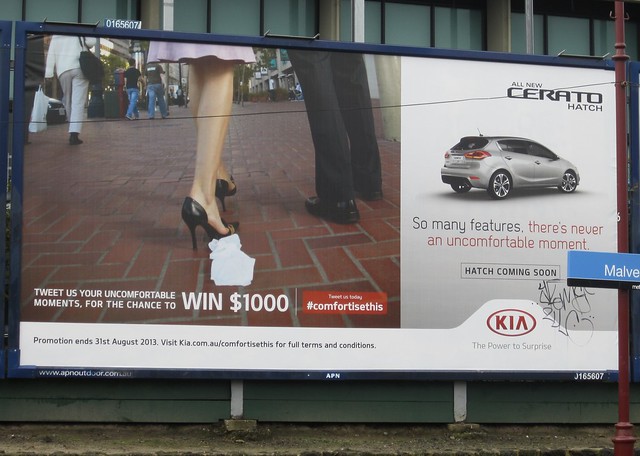 I suppose this is not necessarily poking fun at walking as a form of transport, but it could be read that way.

It does strike me that getting a plastic bag caught on your heel may be an “uncomfortable moment”, but on the other hand, research indicates that driving in unsuitable shoes such as these is just plain dangerous:

Adrienne Savoy, a driving instructor for DriversEd.com, said the higher the heel, the more a person is in danger.

“When you’re wearing high heels, it’s nearly impossible for the heel to stay steady on top of the mat, which would delay the reaction time between the accelerator and the brake. Sometimes you only have a second to react, so that could be a split second you have to prevent a crash,” she said.

Even for those of us who never wear heels, we know that travelling by public transport is an order of magnitude safer than driving.

I think I’d rather be uncomfortable than unsafe.

12 replies on “Why is Metro allowing this advertising in its stations? – part 2 – Kia #comfortisethis”

Isn’t the cliche for embarrassment getting dunny paper stuck on your shoe, not a plastic bag?

Marcus, it depends on what it is that is sticking the dunny paper to your shoes.

I think it’s meant to be a dropped tissue, not a plastic bag.

I actually had someone fall asleep on my shoulder on the Piccadilly line in from Heathrow airport in London. One of a group of French students was obviously a bit tired from the flight, and her fellow travelers made sure that she would be embarrassed later by taking a bunch of photos of her snoozing away. I got to pull a series of funny faces to make the photos even more memorable :-)

How can Metro permit a ‘competitor’ to advertise their product to their customers.

The whole idea of a train company permitting the advert for an automobile to be shown to their customers is, detrimental to their rail business and should not be done.

Ok, I understand where the poster is ‘not on Metro property’, but when it is on their property…… need I say more …..

Really is quite hard to believe. Don’t the ad companies have instructions about anti PT ads?

Where is Daniel the Metro researcher. Great work Daniel I just came across your work after googling a timetable for frankston line.

Sorry Daniel I just realised i am on your blog

As a general rule I don’t wear shoes with heels that high (almost ever in other words) but even when I’m wearing more moderate heels and I have to drive, I take off at least my right shoe before I back out of the parking spot!

Yes it really does happen (stranger sleeping on your shoulder in train).

It happened to me one night coming home 7-10 years ago in Melbourne. And she didnt even apologise after she woke up!