If Tony Abbott’s Coalition won’t build rail, why do they include a rail icon on their infrastructure policy?

At least, I’m assuming it’s an icon for rail — not giant white picket fences to keep out asylum seekers, or something like that. 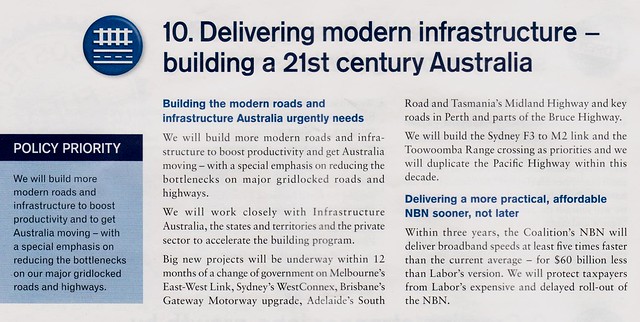 (The above is from the summarised version. The slightly more detailed policy document is here).

True, they’ve specified they won’t build urban rail, but it seems pretty clear their plan is to build lots of roads, and no rail at all.

One can only conclude that they really believe that — unlike every other major urban road project in history — this massive road expansion will somehow solve traffic problems.

Unfortunately this kind of popularist, car-oriented thinking misses is the point that transport is supply-driven. Traffic demand grows to fill the available capacity.

If elected, Mr Abbott will fund more roads, which will fill with more traffic — further undermining sustainable transport modes, not the least by starving them of billions of dollars of funding for years. Wonderful.

4 replies on “If Abbott’s Coalition won’t build rail, why does their policy document include a rail icon?”

With fuel heading to $1.70 within weeks, we are going to need a grand focus towards rail transport.

Or, perhaps we need to get cracking on far more SmartBus routes. Ok, that is public transport, but hey at least for Abbot, it is road based.

Well said Daniel! I like te picket fence comment too! If only it were so easy to solve the refugee problems by building a fence. The coalition internet plan maintaining a part of the copper wire system from the fiber point to each home really seems second rate compared with the fiber direct to each home and if this second rate plan were to be put in place we could be stuck with it for a long time too. It is well worth it to spend the extra 60B or whatever the amount is and do it right the first time even if it takes longer.

High petrol prices are not going to force people onto trains, if there is no train anywhere near them, or it will take them 4 hours to get to work.

Remember that most Liberals still have effectively tax-deductible commuting to work, regardless of what the Tax Commissioner ridiculously claims.