This might become a regular series. Following my posting of old photos from when I first got my digital camera, here’s a batch from early and mid-May 2003.

This building next to the Orica building in Nicholson Street (near the corner of Lonsdale) looks like it’s two-dimensional, at least from some angles. Worth a look in person if you’re around that area. 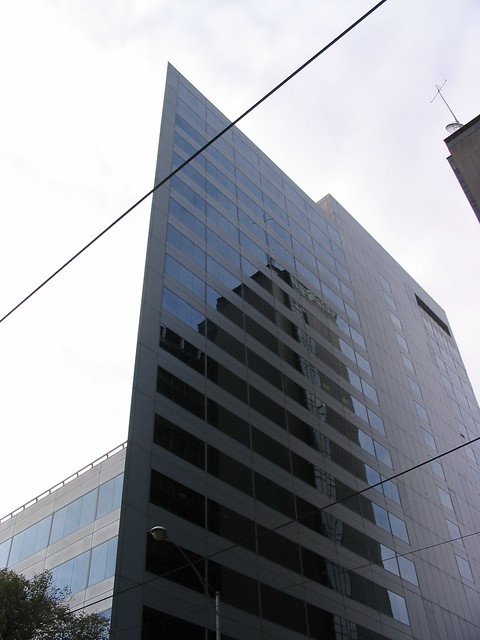 Outside the Exhibition Buildings (or was it the new Museum?) were these bits of old buildings from elsewhere in Melbourne. Are they still there? These pieces looked like Lego. 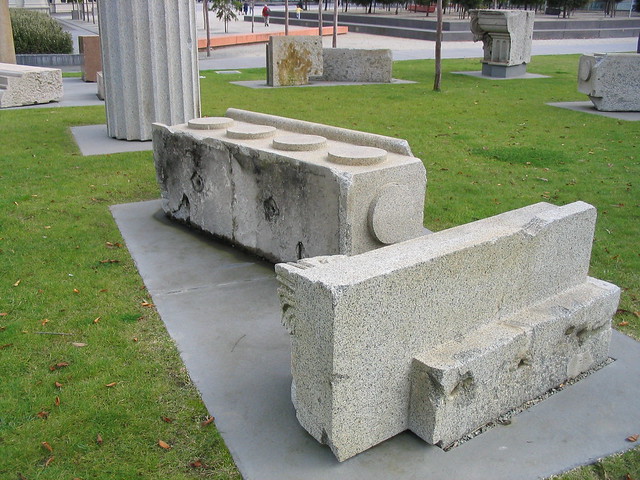 Around this time, Yarra Trams were removing large numbers of seats from B-class trams. In this photo for the PTUA’s “BYO Seat” campaign, John checks the time of the next tram, seat at the ready. 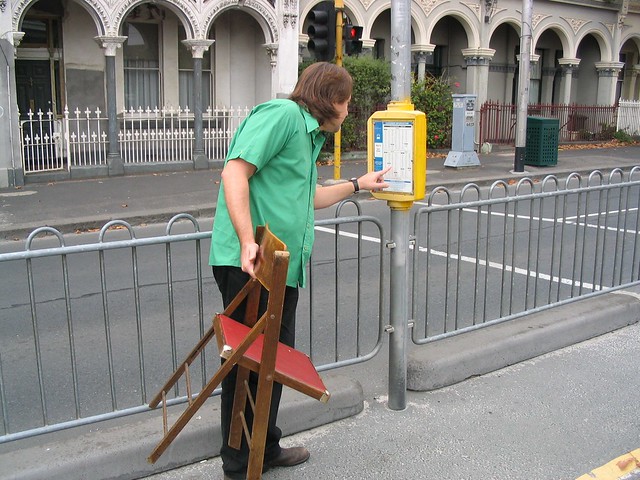 Speaking of trams, here a tram still in Met colours (though without any logo; this was almost 4 years after privatisation mind you) pulls into the old Federation Square tram stop. 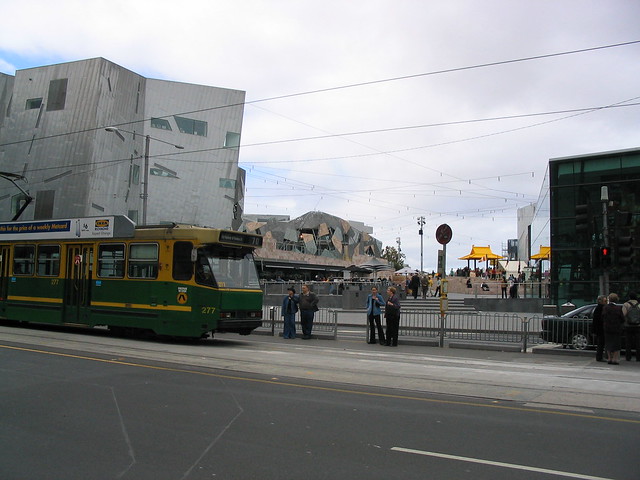 Remember Swanston Street when it was supposedly, but not actually, “car free”? (Even today, errant cars never seem to attract police attention.) 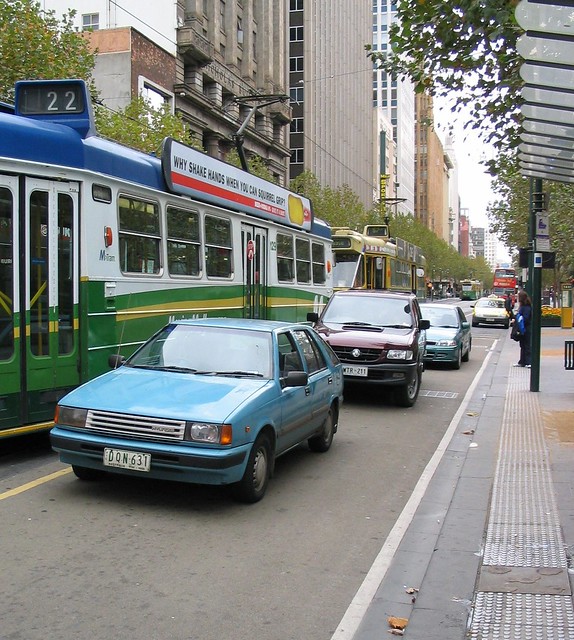 Sadly this is still about the limit of tram priority in Melbourne (though a trial of actual traffic light priority for trams is underway on route 96). 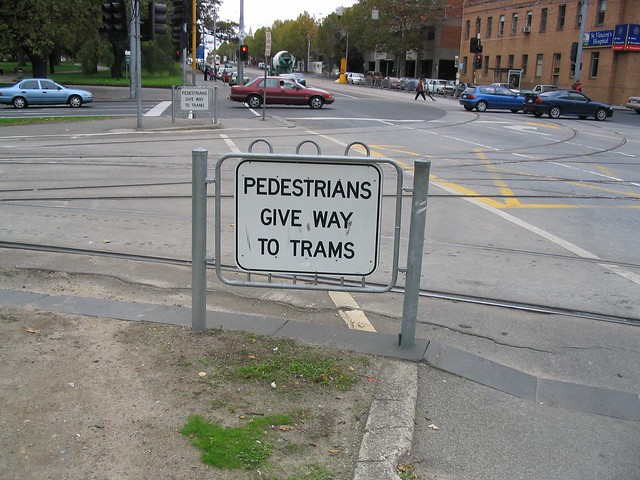 Murrumbeena station one night. Yes, this panel still had a Met logo. 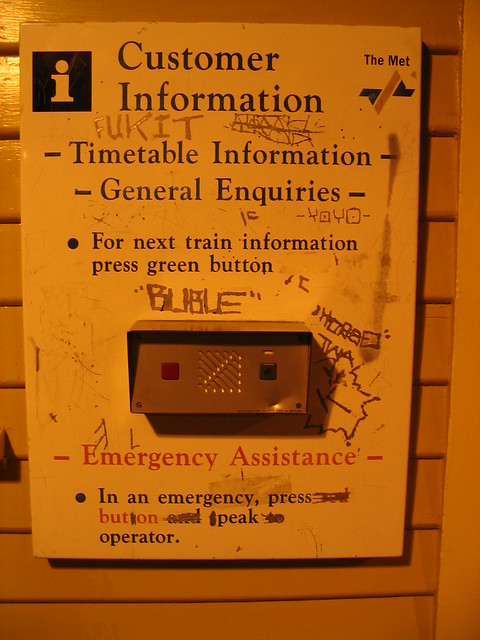 Finally, here is my desk at work, back in 2003. Probably tidier than today. To the right you can see my old organiser/diary. These days I tend to put my appointments into Google Calendar, and sync them to my phone. 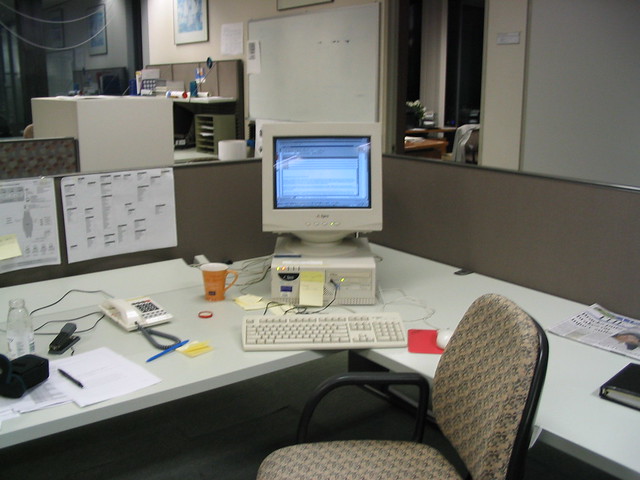 Apart from updating things (eg newer model cars, computers) not that much has changed in 10 years.
Hopefully John has had a haircut!

I spy a Telstra Touchphone 400 on your desk.

I was lucky enough to borrow someone from work’s digital camera a few times during 2003 that convinced me to get one of my own. I sure did use it a lot before I bought a SLR in early 2006.

I work in that “two dimensional” building next to Orica that you mentioned. It houses the Department of Sustainabilty & Environment. I must say its much more interesting from the outside than it is on the inside!

You must have a good backup regime to not lose digital photos from 10 years ago!

My 2003 photos are all on DVD’s. Two copies. I haven’t tried to read any of them recently.

I took 8 gigabytes of photos this week. Storing them is becoming a problem.

@enno, don’t trust DVDs for long-term copies. They can deteriorate.