Next Tuesday’s state budget is probably the last chance the government has to fund Southland station as promised and have work well underway by the time the next election comes around. 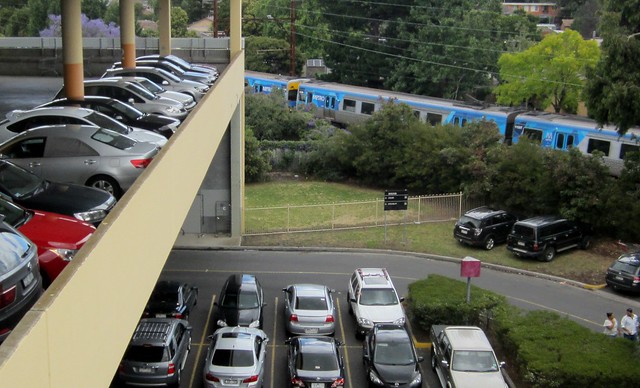 Given a string of seats along the Frankston line swung on public transport issues, if it doesn’t get funding, I reckon there’ll be some nervous local Coalition MPs.

I won’t recount the recent history again, but let’s assume for a moment that the Coalition’s $13 million costing for the station was too low. And let’s assume that Labor’s $45 million was too high (as it included moving the existing bus interchange, which I still think is not a priority). What if for argument’s sake, the real cost was going to be, say, $30 million?

And how would that $30 million, which would benefit people right along the Frankston line corridor, compare to the various road projects that have been funded recently?

Now, I’m not saying that specific projects on the above list should not have been funded — I don’t know enough about them — for all I know, some might be bringing genuinely needed safety improvements, for example. (The Dingley Arterial, however, in my view is just a continuation of past rampant freeway building in the misguided belief that it’ll fix traffic congestion.)

Nor am I saying that PT has received no funding since the election.

But the projects above, which have been funded and commenced with relatively little fuss, and many of which I suspect weren’t even in the Coalition’s election manifesto, add up to $471 million — or more than fifteen times the cost of Southland station.

You have to hand it to the roads guys. While the marginal seats that gave the Coalition the last election keep waiting for Southland station, road funding keeps rolling on.

16 replies on “While we wait for Southland Station, road funding rolls on. #SpringSt”

My guess is that the State government will allocate a few million for a “plan” for Southland Station. Local members will then claim that the election promise has been “Delivered” in their pamphlets.

@Roger, too late, they played that card in 2011. And the member for Bentleigh has already distributed pamphlets claiming things that are still in planning are “delivered” – See http://www.flickr.com/photos/danielbowen/8655439083/ and http://www.heraldsun.com.au/news/liberal-mp-elizabeth-miller-in-embarrassing-bungle-over-rail-crossing/story-e6frf7jo-1226626988197 (I think Southland Stn may have been included on this too, but not sure)

I really hope they follow through on the St Albans level crossing grade separation… been going on far too long. Every morning I see people get stuck in the middle of the crossing because at between 7.15am and 8am (possibly later) the traffic lights malfunction, flash amber and its chaotic – cars stuck in the middle of the intersection, on the level crossing everyone is confused, every day this happens. I’ve reported it to Vic Roads, they have done nothing about it!

Southland Station is much needed. It would massively increase patronage on the Frankston line and thus reduce the costs per passenger.

It would provide significant counter peak patronage north of Southland and this would make the money spent on the platforms three between Moorabbin and Caulfield worthwhile (except maybe at Glenhuntly because of the zones but a northward extension of zone 2 could be possible).

It would provide significant inter-peak and weekend patronage.

There is some potential to cause increased crowding on peak direction services south of Southland because the Southland passengers and the city passengers would be on the same trains.

There was some mention a while back that negotiations with Westfield (Southland`s owners) was what is holding things up.

Maybe the reason it hasn’t been funded yet is because they realise how unnecessary it is? As if the frankston line doesn’t already have enough stops!! I shop at Southland and I still believe having a station there is absurd, there’s a station on either side of the bloody thing as well as a great bus service! I mean honestly, the only reason to build a station at Southland is to appease the lazy general public, and encourage more bratty children and their scarily similar parents onto alteady crowded trains. No thank you. Infact, many of the people who shop at Southland look like they could do with the extra walking to and from a train station further away..

@Drowning, all your points are addressed in the “But…” section of my previous post on this: http://www.danielbowen.com/2013/05/02/waiting-for-southland/

(“Great bus service”? Your standards must be lower than mine.)

Daniel, I (and other readers?) hope you write a blog post about the new Access Docklands transport plan released a few days ago.

Daniel focusing on the South East and looking here (https://www.vec.vic.gov.au/results/results-electoratemargins.html) the seats of both Cranbourne and Narre Warren North are held by the labour party by less than 3% which is hardly a strong margin. I would also hazard a guess that there are some votes to be had with the large number of people who drive in these growth areas and get stuck in extensive congestion along the under developed arterial roads in the area. Also the large amount of the under serviced public transport in these areas is busses that are also stuck in the arterial congestion.
There is as you rightly point out the slim margin and recent swing in seats along the Frankston train line (I suspect the underlying cause is more to do with the gradually changing demographic of these beachside areas than anything else though). The question is will an additional train stop and associated time really be a big vote winner in these seats. How many of the current/future commuters and users of southland will use the station for shopping as opposed to driving to southland (sure some kids might use it but they probably would have used an accompanying station and they don’t vote). The only votes I can see in it may be some of the elderly or mobility impaired along the line. It’s also possible that people regarded the original proposal as another “labour waste” and thought the Liberal offering was a value for money or abandon option instead.
Also you left out peninsula link from your roads. Is this as it largely serves the strong liberal seats of Mornington and Nepean (along with being committed to by the labour government). I still think the fact it was “completed” by the liberal party may have some vote pull in these marginal seats.

Southland should chip in a good bit towards the cost, for the customers the new station will generate, like me who hates large shopping centre car parks to the point where I won’t go there.

The Hallam road widening which you mention is a much needed and welcome project, the only problem with it is that it leaves one section one Hallam road untouched. Which incredibly busy section that has extremely large volumes of cars busses, pedestrians and trucks(what a great mix!) is being left as a single lane potholled death trap? The section where Hallam train station is of course

What people forget about the grade separations at level crossings is that you are left with an area in and around/under the bridge that no one wants to use.

The road projects in and around Pakenham are needed though, so many houses have gone up there and the roads haven’t caught up yet. It was a relief when the Pakenham bypass finally opened as it took half an hour off the trip at least.

I really do agree there needs to be a Southland station. Me and my friends often go there and it’s annoying to have to walk all the way from Cheltenham. Really, why’s it taking so long?

Speaking as someone who lives near a train station / shopping centre combo… at all times of days each train drops dozens of people who want to use the shopping precinct… I’d say maybe 500 to 1000 people per hour. Given the two hour multi-level car parks are considered “large” if they have “hundreds” of spots, the train station probably services more shopper throughput than an entire car park would.

I note that the “nearby” train stations to Southland require more than a km walk. Your “lazy” shopper has already negotiated whatever walk they needed at the train station at the other end and, “lazy” or not, the extra km lugging shopping (and maybe kids) is outside the range most modern city dwellers would do in any district.

Even putting in a new station would leave, what, a 400m walk into the centre? But over the decades I’ve noticed a gradual decline of public transport services up to about 600m from station to destination, and a sharp decline of use if the user is made to walk more than that until 800m puts most people off and over a km puts off almost everyone.

(Oh, and even if buses run frequently and on time… many people myself included simply can’t stomach regular bus use.)

@Austin, an extra stop at Southland would be in line with other suburban stops, adding about a minute to journey times. In contrast, recent timetable changes added several minutes to total running times, but seem to have been largely forgotten.

Plenty of people go shopping without a car if they are given the chance. Just look at the CBD for example.

@Joe, the rail line is about 100-150 metres from the western entrance of the shopping centre. Hardly any distance at all, though of course it’ll need a well-designed path from the platforms through the car park for maximum success.

Is DFO Spencer Street the example of well patronised shopping in the CBD which is near good public transport? … Not to mention it also has a large car park. I wouldn’t be surprised if Myer and David Jones at Chadstone/Doncaster were doing a comparable trade per sqm of retail space to their city headquarter counterparts and their poor PT access is well recorded.
Anyway it looks like it will still go ahead which is a good outcome particularly for people with limited mobility wishing to access Southland.
I always seemed to use/notice about 2mins between departing times of stations including some accel, decel, travel between and some boarding/departing.