I just realised my iPod is nearly nine years old. That’s an age in the world of computers and electronics… does that make it a retro item? 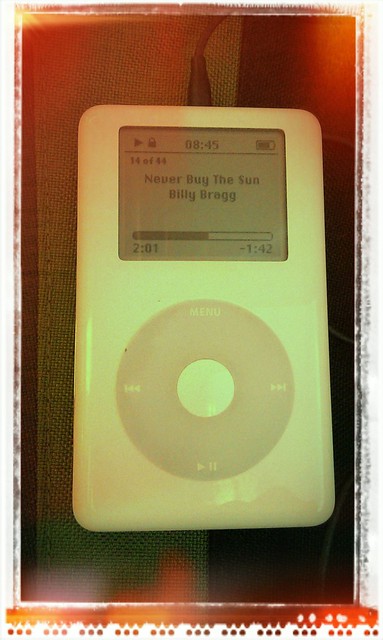 It’s a third-generation iPod, back from before they had silly features like apps, movie playback, and colour screens… And yes, it’s still going strong, though admittedly most of its use is at home in its cradle, playing music into the stereo.

And yeah, the ear phones aren’t in such good shape, which is why I’m not using them currently.

6 replies on “My retro iPod”

I have got the same model and it also still works. Mine was a 40gig model and cost $800!

I have, and still use, the same one as well! It works well in a device I plug into my car’s cigarette lighter and tune through a radio frequency. Has greater storage than any of my iPhones since.

I was just telling an Apple Engineer the other day (trouble shooting my iMac) about my 2nd generation iPod which is still my stereo.

Has greater storage than any of my iPhones since. – That’s because everything started switching to solid state drives, and with good reason. They’re much more durable, use less power and are much faster.

You’ve done well to keep that ipod working Daniel, although I bet it has a lot to do with the fact that it doesn’t leave the dock very often. I had a 6th generation that died long ago, unsurprisingly after a hard drive failure. There is just so many times a mechanical hard drive can get knocked before it stops working.

I’d also guess that the battery life on that ipod is almost non-existant, as lithium batteries don’t like being overcharged and if its almost always in a cradle its pretty much constantly getting charged.