In looking through my late father’s papers, I found the following, which he wrote about an incident on Rupert Murdoch’s Sydney Daily Mirror in the mid-1960s.

I found it fascinating in light of the News Of The World controversy that was uncovered during 2011, though of course one should not jump to conclusions about the practices in the 1960s versus more recently, particularly at News’s current Australian newspapers.

I want to make it particularly clear that I’ve never had an issue with reporters I’ve dealt with at the Herald Sun, various local Leader publications, and other News Limited papers (or from other publishers).

(The Daily Mirror merged with the Daily Telegraph in 1990.) 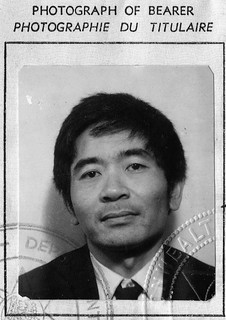 I have not modified the text apart from making minor typographical corrections, adding some paragraph breaks for ease of reading, and inserting an image of the newspaper article (found separately in my dad’s papers) into the text.

I note the same incident is discussed in this recent article by Richard Neville (named below as then editor of Oz — which should not be confused with The Australian, which started later in 1964). Other references can be found by searching Google for the boy’s name.

However, aside from a quick look at these, I have not verified that any of the information in the account below is accurate, such as checking with those named for their side of the story.

A likely scenario to this incident is: In 1963, Murdoch was eager for Calwell to beat Menzies. In 1964, NSW had a state ALP Govt to which, of the four Sydney dailies, only Murdoch’s Mirror was sympathetic. Elections were due in 1965. It is possible that a Kitchen-Cabinet decision was taken to let him off the hook. He had then only two dailies, worked just up stairs from us, and was in those days accessible in personality.

The boy lived in Zetland, which comes under Sydney Central Police. What still seems striking is the helpless outrage, not only of whole communities, but of an entire police force.

David Bowman has asked had I any hard detail on a parallel incident on Murdoch’s News Of The World (London). News Of The World would have six school sex stories every year, and you cannot check the consequences, the way you can this one, by putting the Sydney Sun and Mirror stories side by side, say in the Mitchell or National Libraries, then checking in Oz that the incident did actually occur, then picking up the name of the boy in the Perth Sunday Times.

Early in 1964, the circulations of Sydney’s two afternoon dailies, the Mirror and the Sun, were running about level. The Mirror was continually angling to win, if only for that day, the race for circulation.

This is the story of a Mirror front page and its consequences. I was a D Grade reporter on the Mirror at the time, and played no part in the events I now record.

Charles Stokes, who had a long history on Sydney papers as a Churches correspondent – he was a very up-front Anglican – found this story, and brought it to the editor, the late and unlamented Zell Rabin, who said on the Wednesday, “Give it a beat up!” 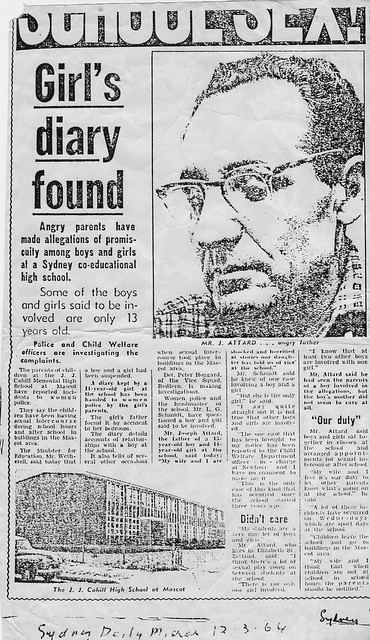 We ran it as front page lead on Thursday 12 March 1964 in all editions. The headline was SCHOOL SEX!, the school was named as the J.J.Cahill Memorial High School, Mascot, and we claimed that parents were angry at widespread fornication among the pupils. We stated that already a thirteen year old boy and a fourteen year old girl had been suspended from school: photograph of school and one angry parent, a Mr J.Attard.

The Sun found itself forced to get a few paragraphs together, which they could only do for their final edition (3.30pm for 5pm) so we won the circulation race handily that day. They were accurate. They said only that a parent had read his daughter’s diary, and on this basis, the boy and girl were under temporary suspension, pending investigation, medical examination, etc.

In 1964, fourteen year old girls’ diaries were likely to be vague and imaginative.

All that afternoon, parents were ringing us saying, “What have you done to us? Ours is a good school.” Gerald Stone and I had the two front desks in the newsroom. Three thirteen year old boys appeared, and Stone was deputed to listen to them. When he had sent them off, he murmured to me that it took guts for kids of that age to come into the city, and ride up in Murdoch’s lifts. Later, as I left the building, kids were shouting, “We think your paper stinks!”

That night, the boy hanged himself, and a copy of our front page was found in his pocket.

The next day, Friday, the nits who hope to collect £2 by ringing in a piece of news were ringing all the other papers. Their reaction was a stunned “This might have happened to us.”

On Saturday the nits were ringing us. I was on duty, as was Charles, and the editor came in when he heard the news. Charles was upset for quite some time. He said it was the parents’ fault. They lacked understanding.

Zell went out to beard the bereaved mother. As Charles said, she lacked understanding, having been more concerned for her husband and her’s neighbourhood reputation than for the state of mind of her son. She told Zell that for days young Johnny had been watching the awful violence they have on TV, cowboys, gangsters, etc, then lo and behold, she went and found him hanging from the rotary clothes hoist. Perhaps she and Zell were not looking each other in the eye.

Zell runs a story to that effect in the early editions, before the sports results begin to pour in. No names, no address, and it looks quite a moral little story.

But we also have Sunday papers in other state capitals. At least our Perth paper, the Sunday Times, runs quite a different story that is sent out, by a bungle I should hope. It is also a moral story. It says that a boy in Sydney, aged thirteen, who had been suspended from school for sexual misbehaviour hanged himself as a result. Name and address are supplied.

As it happens, government doctors find the girl was a virgin.

Our crim reporters find it hard to get tips from the police for some time, because they think Zell should be in the dock for manslaughter.

When the inquest comes up, the Sydney Morning Herald pulls itself together, and sends a reporter and photographer. The coroner says, no photos, no reports. Laurie Oakes muttered to me (only a guess) that Murdoch bribed him.

I was telling the story all around town. Geoffrey Lehmann, then a young lawyer, asked me if he could give it to Oz. I said he could give it to whomever he wished, adding sarcastically that Oz editors Richard Neville and Richard Walsh, with their sex-in-the-head obsession with nymphets would fuck it up. Lehmann used to get invites to their exclusive nymphet parties. They did. Eight sentences which their most devoted admirers don’t even remember, and their punchline was – THE GIRL WAS A VIRGIN! Oh big deal fellers!

I handed this story, with the related press clippings to Brian Johns, for the Ethics Committee of the Australian Journalists Association. They took no action. It would be interesting to know if the AJA still had this material. The related Saturday Mirror might be hard to track down, because material is shed as it becomes mainly a sports results paper as the afternoon progresses. (Also check various state editions of Truth, Adelaide News, Sunday Mail?)

I was basically saving up to go to England, where I ended up sitting out the Vietnam War. On my return, I found good-hearted Sydney journalists (say Dick Hall) had forgotten, or pretended to forget the incident. A ready amnesia for an event that caricatured so horribly their occupational rationale?

Charles Stokes also came to London, got on the London Guardian. He was then appointed to a lectureship on journalism at Queensland University, but is now with a NSW Government Dept. (He was picked sight unseen by the then Senior Lecturer-in-Charge, an old Guardian man, but was finally told the University wished he’d go away.)

No one was ever punished for this incident, any more than the London Sun beat-up men are. (Sydney Morning Herald and Age Weekend Magazine 18-3-89 has the story of how Elton John forced Murdoch to pay out £1,000,000.)

When Rabin died in 1967 aged 35, people made an incredible fuss about the Boy Genius of Tabloids – even an obituary in the London Times (not then owned by Murdoch). It was probably written by Murdoch who was then in London, and who as he then was, liked Zell because he’d stand up to him.

Fascinating tale. It was not unusual for a newspaper story to lead to a suicide, whether the person was guilty of what was reported or not. I guess this one is different in that it was someone young who was a victim.

The first thing I did after reading this, was to go to Wikipedia to check the age of the ABC’s famous Moscow correspondent of the early 90’s.

Hi Daniel, my name is Trish. We are very interested in this story as it is very close to our hearts. A few years ago we were informed of my mothers’ brother (my uncle) who was adopted out and lived with his adoptive family in Sydney. His name was Digby and this story is about him ( he was the 13 year old boy in this story) We would love to hear from you and talk with you at any time that is convenient, whether it be an email, phone call or even snail mail, which ever suits you. We would like to get hold of a photograph of Digby if possible, thankyou so so very much for allowing us to write this to you. Thanking You, Trish and Lynette .

All the information I have on this is in the blog post. My Dad left the papers with the text I transcribed, plus the newspaper article I scanned. I don’t recall ever talking to him about it before he passed-on – which is a shame, because in retrospect it’s a truly fascinating story of injustice.

I wish you the very best of luck in hunting down more information about your uncle.