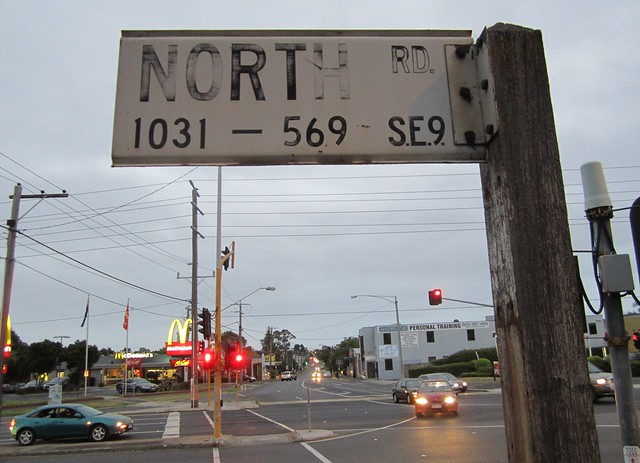 I’m quite amazed the sign has survived so long, unless perhaps it is a deliberate, heritage-based decision to keep and maintain it.

The old codes don’t seem to be in the first edition Melway, but I did find them in an older Collins street directory that I have. As with London postcodes, the letter is a direction from the GPO (or C for Central).

I don’t have the time or inclination to type them all out, but there is a full list in Wikipedia: Melbourne Postal District Numbers.

Far distant places such as Dandenong, Frankston, Glen Waverley, Mitcham and Eltham appear not to have had Postal District Numbers.

Update: Tony found (most of) a similar old sign in Flemington.

Yep, that is amazing. Probably most people reading your blog weren’t born when that sign was put up and it’s still there.
Interestingly, from your link to the list of postal districts, there is one called “Were Street” which is a minor road in Brighton – but it gets its own district! I guess there was (still is) a post office there.

There’s an old mile marker post on Maroondah Hwy in Ringwood, on the median strip just west of Oban Road. It’s right next to a rut in the ground where innumerable dickheads have mounted the median to push their way past the queue and drive into the right-turn lane, as such dickheads often do. Miraculously, the concrete mile marker has survived.

Interesting. We live in SC 2. I suppose that is South Central.

I think I’ve seen one of these on St Kilda Road.

I remember seeing what is probably a very old sign saying something about tram service (I can’t remember what exactly) mounted on a pole along with several other signs and wires at the corner of Flinders and Elizebeth Streets in the CBD in front of the 7-11 on the northwest corner. I’ll have another look at it tomorrow as I somehow remember it being a bit outdated and probably forgotten as it is hard to notice it at a very busy intersection when crossing the street.

I’ve often looked at that very sign while waiting to cross the road and wondered how old that post code must be. Thanks for the pointer

I had another look at the pole on the corner of Flinders and Elizebeth Sts. and saw not one but two very old sings with a list of tram routes. Many of the numbers listed I do not see running today and I suspect that trams have not had some of these route numbers for a very long time. Perhaps people who have lived in Melbourne for a long time might recognise and remember these old tram route numbers.

there used to be a few of them around in north carlton / east brunswick when i were a lad – i remember n3, n4 and n7 matching present-day 3053 (carlton), 3054 (north carlton) and 3057 (east brunswick). not sure if any of them are still there – i think there might be one or two attached to the sides of houses rather than on signposts.