With most kids going back to school this week, Andrew was blogging about the first day of school.

I don’t remember much about my first day either, though I do have a photo that I believe was snapped that morning: 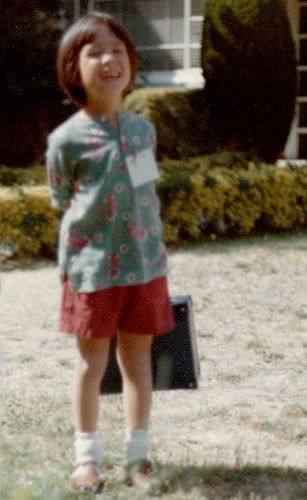 Long-haired hippy. It was the 70s though. And I was obviously in a good mood… or it may have been my usual “I’m being photographed” face — lots of kids have those.

What I do remember is that (possibly on enrolment day rather than the first day of term) I decided that I wasn’t capable of spelling “Daniel”, and went by the name “Danny” instead… that lasted for 9 years, until I switched high schools to Melbourne High and decided I liked “Daniel” better. (My surname changed at the same time.)

I also recall early in that first term of Prep an older kid bullied me about something (possibly race-related, or perhaps about the odd appearance of my right eye), but I can’t remember any of the other details. Hopefully I wasn’t too upset about it. Back then there wasn’t a school buddy programme, which probably would have helped.

But as far as I recall, no other issues in Prep, and most of my primary school years are filled with happy memories.

And I still remember you from those days (well, ok a little later, you must have been in grade 4 when I met you) as the geeky older brother who liked Dr Who :)

Great photo. I have one where I am picking up my older girl from her first day at kinder and she looks kind of like that, too.

@Emma, hahaha funny. Not much has changed then!

@Roger, nope, no school uniform. Some kids wore something approximating uniform, but it was completely optional.

Dig that shirt! Would make an awesome retro pattern for wallpaper, or cushions now!