What if to get a Slurpie at 7-11, you first had to buy a voucher from a tram conductor? 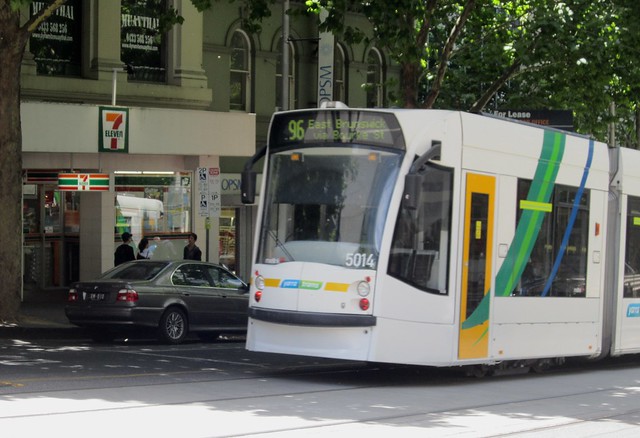 Some would argue the situation now, where no tickets can be bought on trams, and Myki cards have to be bought and pre-loaded (at 7-11 or elsewhere) is equally silly.

In fact, if you look at the recent (the past 30 years or so) history of public transport ticketing in Melbourne appears to show repeated attempts to move to self-service, pre-purchase tickets.

One way of looking at it is to improve the efficiency of the network. Trams are no longer staffed by two people — one could argue this paved the way for service expansion (particularly on Sundays; frequencies pretty much doubled in 1999). Buses didn’t change their staffing — bus conductors were phased-out long ago.

Many stations no longer have a staff presence. Busy stations can get by with fewer staff than in the past — who remembers the vast number of ticket checkers at CBD stations in peak hour, and conversely the long queues to get in and out of places like Flinders Street on weekends because there were only a couple of staff on duty on the gates, and only a couple of gates open?

The other way of looking at it is a steady reduction in the quality of customer service. Tram passengers could previously board and sit down and someone would come to them and sell them a ticket (including paying with notes), give them travel advice, and provide a security presence.

Similar on railway stations, with the growing sense of unease on unstaffed stations (particularly at night) enough to prompt the Coalition in the last election to pledge armed guards after 6pm — despite that about half of reported assaults on railway stations occur at just ten stations, and much of it is before 6pm.

If one were to theorise that the bureaucracy has been trying for some time to move to self-service tickets, and off-board payment, it looks like they have finally won.

Well, for now at least.

Terry Mulder remarked in the Herald Sun the other day:

“The Coalition Government will continue to refine the system over time, as they have done overseas,” he said. “We will not be re-introducing short-term paper tickets in the foreseeable future.” 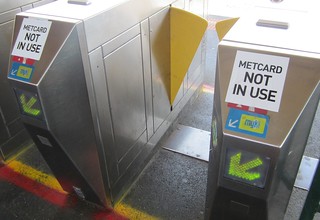 It wouldn’t surprise me to see one or both major parties going into the next election with some kind of short-term ticket-related pledge.

Remember, Labor in their first term made changes to Metcard, restoring the availability of daily tickets on trams:

Daily tickets will be available to passengers on all Melbourne trams by the end of September, Transport Minister Peter Batchelor announced today.

Reversing one of the great debacles of the Kennett Government’s automatic ticketing system, Mr Batchelor said the conversion of tram ticket machines to introduce daily tickets would start from the beginning of September.

“By giving passengers the chance to buy a daily ticket on every tram, the Bracks Government is giving the people of Melbourne what they told us they want,” he said.

If you want to see short term tickets restored, now would be a good time to write to your state MP, and to sign the MykiSingles.com petition.

Update: If you saw this opinion piece in The Age today, it’s probably worth noting that while the author made some good points, he also made a lot of factual errors.

7 replies on “What if to get a Slurpie at 7-11, you first had to buy a voucher from a tram conductor?”

It’s the visitors from interstate and overseas I feel sorry for.
It is a bad look for Melbourne

And the people have spoken again. I have yet to hear or read any comments in support of a system that fails to allow the purchase of short-term tickets. There is an overwhelming and probably unanimous call for a simpler system to cater for visitors, tourists and casual users. Yet the government blocks its ears and won’t even suggest it is something they will consider.

As much as I agree that a short term option should be available, I wonder whether the “visitors won’t get it” thing really is that valid. Visitors who’ve been here before certainly will find it different.

Visitors who haven’t been here might be expecting it to be something like they’ve got at home, or perhaps not expecting anything at all. An increasing number of people have contactless systems at home, so perhaps their expectations are not that far off what exists?

Also (and it was a while ago, so perhaps I’m wrong) I don’t remember thinking “yes, I’ll just hop on this tram, where clearly I can buy a ticket” when I first came to Melbourne. Part of my confusion in most of my travelling is trying to figure out how to buy public transport tickets, and what sort of ticket I need — it’s always slightly different.

Perhaps Myki makes it simpler (if not cheaper): buy a Myki, put cash on it, and touch on and off. You don’t need to think about zones, or weekends, or off peak or peak, concession or not.

(Yes, there should be a cardboard multi-trip Myki, and the process for returning a Myki should be easier.)

Living in Ballarat and using myki on town buses I see only a small percentage of users utilising a plastic myki card, majority use short term myki tickets. I find them very annoying as passengers fumble around and count out their 5c peices or hand over their $20 note for their $1.90 fare, dwell times really start to blow out on particularly busy routes like the number 1, plastic card users tend to just fly by and top up with larger amounts or just use the machines at the train station. There is another reason I’m not a huge fan of these short term tickets, I pull at least 4 of them out of my front yard daily, streets around routes are often littered with them, they are floating in the creeks I even found one in my guttering? $6 or $3 is not a huge price to pay for a myki, so sick of hearing this paper ticket argument! I think we are better off without them.

@Simon, I agree visitors may have encountered smartcard systems in their home cities, but none would have found systems where buying a smartcard is compulsory for using PT, and the card is not refundable.

@Balben, interesting point. The pricing in regional cities is completely up-the-creek. Unlike the pricing that was in place in Melbourne (when Metcard was still available), there is little incentive to use Myki over short term tickets. I should blog about this at some stage. I think the option still needs to be there for emergencies, but pricing should be much higher for short term tickets to discourage their use.

Yes, you’re right, I was thinking Oyster, but you can still buy single trip fares there as paper tickets. They’re just a complete rip-off, which is why I’ve never used them — I suppose they could do the same thing here, that would help pay for the single-use thing, as you mention.

As I’ve said many times, a better solution would be multi-use cardboard Mykis. Or give you $6 credit when you buy a Myki.

But even so, Mykis aren’t exactly hard to come by, they’re probably available in most of the places that people would buy tickets (except trams of course).

@Balben – There are numerous ways to address the issues you mention surrounding short term tickets. Many cities for example insist on having the exact change when buying a ticket as you board (if you don’t have the exact change you either forfeit the change you would have received, or you get off!). Daniel has also pointed out that pricing should be adjusted to thoroughly discourage the use of short term tickets. In Melbourne I’d have no issue with short term tickets costing a $1 or $2 more than the Myki equivalent. This measure will likely push regular users to make the switch to Myki whilst allowing visitors and people who for whatever reason don’t want to buy a new Myki for a given journey to travel without forking out for the card.