This Friday is the last day for Metcard.

But if you thought it was the end for paper tickets, think again. Even aside from V/Line tickets, they will live-on.

As noted in today’s Age, despite the claims from government that it’s impossible to have paper tickets on a system that’s moved to Smartcards, there are several scenarios in metropolitan areas where passengers will continue to be issued with paper tickets. 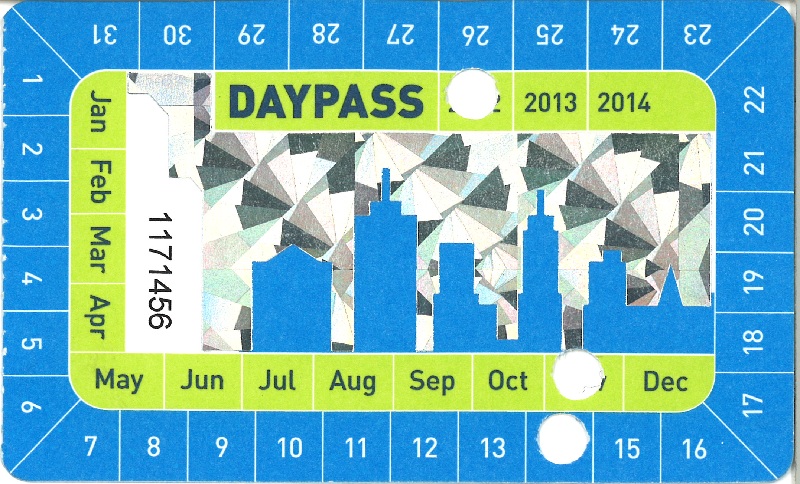 (This picture provided by “MAN_24.350” on the BusAustralia forum)

This is a Day Pass, basically a zone 1+2 daily ticket. As you can see, it bears an amazing resemblance to paper tickets used before Metcard.

So far I’ve found three cases where they’re being used:

Firstly, By charities, for clients in need who need to be given a public transport fare:

The Day Pass is for clients:

Secondly, Seniors are provided with travel vouchers each year, and these can be exchanged for Day Passes:

As a Victorian Seniors Card holder you can exchange your Free Travel Vouchers for a Day Pass as an alternative means to travel on public transport instead of myki.

The Day Pass is not available for sale to the general public and is ONLY issued under special circumstances, or to certain concession groups that are redeeming free travel entitlements or vouchers.

This Day Pass entitles you to one day’s travel on public transport in Zones 1 and 2 in Melbourne, as well as on regional town bus services where myki is operating. You must use a myki for any other travel undertaken.

…
In order for the Day Pass to be valid for travel, it must be issued to you at a staffed train station with the day, month and year of your intended travel, hole-punched. A Day Pass that does not have the day of intended travel identified in this way is not a valid ticket.

And finally, and I find this one the most amusing, they are to be issued to Seniors on Mornington Peninsula bus routes 787 and 788.

Why? Because of a shortcoming with Myki. You see, under Metcard Seniors can buy a Seniors Daily for $3.80, covering all travel in metropolitan Melbourne, including zones 1 and 2, and the entirety of routes 787 and 788, parts of which are beyond zone 2.

Myki couldn’t handle this. It deals with parts of those bus routes as being in zones 3 and 4, but it treats a Seniors Daily fare as only being valid in zones 1 and 2. Seniors using Myki to travel from say Portsea into Frankston, and then on to central Melbourne and back again ended up paying about $9 for the fare.

Rather than fix the problem in the Myki software, instead Peninsula Seniors will be sold a Day Pass:

If you are travelling on bus routes 787 and 788 and making a return trip across three or more zones in one day, seniors on the Mornington Peninsula can buy a Day Pass from the bus driver and continue to pay the Seniors Daily fare of $3.80.

The Day Pass is a paper ticket that is valid for one day’s unlimited travel between Zone 3 or 4 on the Mornington Peninsula and into Zone 1 in Melbourne.
…

You can purchase a Day Pass from the bus driver for $3.80 to travel on that day only. Show your Victorian Seniors Card to the driver to request a Day Pass.

When travelling with a Day Pass, you must show it to the bus driver when boarding, to train station staff to gain entry or exit from a gated station, or to an Authorised Officer when requested. You must also carry your Victorian Seniors Card when travelling with a Day Pass. Please note that Day Passes cannot be used to travel on any other day, other than the date specified. 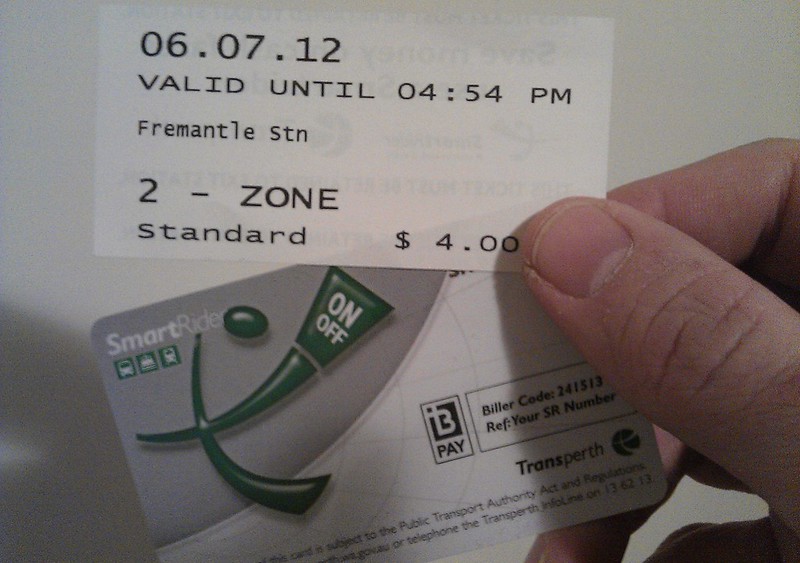 What about others wanting paper tickets?

There’s no doubt that encouraging as many people onto smartcards makes sense from an efficiency point of view, and for regular passengers there are a number of advantages (even if the implementation has been extremely troubleprone).

But for a variety of reasons, not having some kind of short term ticket option opens up a world of problems.

I’m not suggesting that punch tickets be used more widely as a short term ticket — nor am I suggesting that the short term cardboard Myki tickets currently used (for now) in regional cities be brought into metropolitan Melbourne.

Myki vending machines and bus consoles are capable of issuing receipts for top-ups. These should be used to print paper tickets (as is done in Brisbane and Perth) which can be shown to staff — just like the Day Pass.

9 replies on “Yes, there will still be paper tickets post-Metcard — so why not offer them more widely?”

The solution to the tourist problem is staring the government in the face. The government’s inflexibility on this issue demonstrates a government that wishes to bend the people to its will, rather than reflecting the will of the people.

Someone asked about other bus routes which extend beyond zone 2, such as the 684 to Eildon. http://ptv.vic.gov.au/maps-stations-stops/metropolitan-buses/bus/1935

The 788 (and I assume 787) are different in that while Metcards weren’t valid beyond zone 2, there was an exception for Seniors Daily tickets: TICKETING: Metcards and myki are valid for travel between Nepean Highway/Bruce Road and Frankston. Travel before this point requires a paper ticket purchased from the driver. However Seniors Daily Metcards are valid for the entire route.

The Day Pass system is purely to get around Myki not handling that scenario.

As far as I know the same Seniors Daily offer doesn’t apply to other routes which run beyond zone 2.

My guess is they didn’t want Seniors Daily fare caps (and weekend freebies) to apply for zones 1-4 because that would mean people would get cheapie rides to places like Geelong – it’s all to do with the Peninsula being kinda-sorta an extension of metropolitan Melbourne, but Geelong not (though the probably unwise move to make Lara zone 2 will have a similar effect).

Perhaps the root cause is that until ‘headless mode’ goes away, the system won’t know it is on route 788 and to cap accordingly.

If you accidently touch on your myki, or have already used your myki for travel on a day, you should continue to use your myki for all travel on that day. You will automatically be reimbursed within a few days for any amount spent over $3.80 for travel on Mornington Peninsula buses and Melbourne’s trains, trams and buses. You should not buy a Day Pass after touching on a myki, as no refunds are available for Day Passes.

Please note that you should ensure your myki has enough credit to cover your travel (this may be up to $10 for the day), and top up at the first opportunity if necessary. If you experience problems with the reimbursement you should contact the PTV call centre on 1800 800 007.”

Has the government released the report from Deloitte about Myki? I remember that they refused to release it a while ago. Is that still the case? Would make interesting critique…..maybe thats the problem though??

There is another way to get a paper ticket that works all over Melbourne. Buy a V/Line monthly pass from Southern Cross Station to Lara. It’s $188 or so, roughly the same as a Zone 1&2 31 day pass.

This is valid to Lara (of course!) but also across all of zones 1 and 2 on all modes of transport. You just show it at barriers, when conductors or (rarely) AOs ask to see it. It also means no swipe on/off on buses and trams, which is a blessed relief.

I spoke to a V/Line friendly the other day. Turns out there is a committee that deals with the future of Myki and V/Line ticketing, but it hasn’t met for a while. I wonder why when they upgraded all Geelong line stations to allow Myki travel from Marshall to Lara, but not to Melbourne. We’ve had Myki on buses down here for longer than most.

At this stage, it must be software, because there is no physical reason why the entire Geelong line couldn’t adopt Myki tomorrow other than political will or logistical nightmare to make it go forward. I see on the V/Line website, they plan to make the switch in 2013, but we’ll see.

How about making Public Transport free and ticketless. We pay for PT either way, either with tickets and taxes or with just taxes like ABC radio + TV.

We would have saved $1.3 billion on building Myki, the cost of running Myki, ticket inspectors and of course encourage people to get out of their cars and use PT because its “free”!

We run free tourist buses but nothing for people that live here and pay taxes?

@Jacob, you’ll have to convince people to raise taxes by $500 million a year.

And it still wouldn’t get cars off the road.