From a conversation with my sister, an occasional PT user, I’m guessing there are some discounts around the place that people don’t know about. The good news is that with Myki being forced down everybody’s throats, if you can get over the hurdle of getting a card (now $6 full fare, $3 concession), it’s easier than ever before to get the discounts. 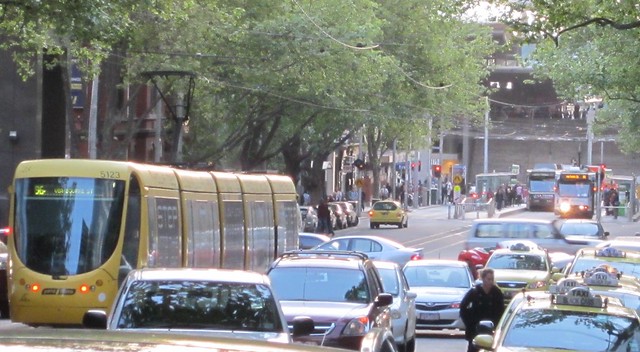 This is just a summary, and is aimed at Melbourne, though some of the rules apply elsewhere in Victoria. There are various exclusions (for instance no free travel on some services such as Skybus or Countrylink). Click on the relevant link for all the details.

(And if you don’t understand how Myki works, and the difference between Myki Money and Myki Pass, go read this or this.)

Kids aged 3 and under ride for free.

There are various other free passes for (some) war veterans, companions/carers, and also some retired public transport staff.

There’s free travel on weekends for Victorian Seniors — see below.

Note that Myki cards need a positive balance (above zero) for the free travel to work (eg if you owe them money, you don’t get a free ride).

Concession fares are generally 50% of the full (adult) fare.

You can’t buy a concession Myki from a vending machine; you have to find a Premium station or retail outlet or buy online.

Kids 17 and older who are in fulltime study (secondary or tertiary) need to get a VPT (Victorian Public Transport) Student Concession Card (costing $9) to be eligible to use a concession Myki. You also need one of these if using a Student Pass (discounted 6-month or yearly ticket).

Anybody with a Health Care Card (with a Victorian address) can travel on concession fares — these cards are broadly available to people on limited incomes. This is helpful for some postgrad or part-time students who are ineligible for student concessions.

If you have a Victorian Seniors Card you can get a Seniors Myki, which gives concession fares on weekdays, capped to the Seniors Daily $3.60 fare (2013: $3.80), and free travel on weekends.

There are various other concessions for (some) war veterans and widows, and asylum seekers.

From interstate or overseas

Seniors from Interstate can use a standard concession Myki, but can’t get a Seniors Myki. It’s not clear to me if seniors from overseas are entitled to any discount at all — although this page implies all “non-Victorian” Seniors can get a concession Myki, but this is not reflected in the Fares & Ticketing Manual, which talks about Victorian and interstate/Australian seniors or pension card holders.

The rules for kids appear to apply to those from interstate or overseas — free rides for 3 and under, concession fares 4 to 16. No discount for 17 and over, as you have to be a student in Victoria.

The rules about 2-hour tickets being valid all night after 6pm still apply to Myki: the fare applies until 3am.

Free rides apply on Metro electric train services if your trip is finished by 7am. You can’t just travel without a ticket; you have to get a Myki and touch-on and touch-off so you can prove your trip was finished.

(Although it’s advertised as 7am, technically the cut-off time is actually 7:15am; this is to allow for delayed trains. If your regular trip arrives at 7:10am, then you lucked out. Just don’t complain on the odd day it’s delayed and you have to pay. And don’t complain that you have to get a Myki and touch-on and touch-off to get the free travel. Boo hoo, you’re breaking my heart.)

On weekends and public holidays, the old Sunday Saver/Weekend Saver discounts apply, meaning you pay no more than $3.30 for zones 1+2 (2013: $3.50). If you’ve been driving on the weekend to a zone 1 station to avoid the zone 1+2 fare, you might as well not bother.

Note that it applies on all gazetted Melbourne public holidays. This is a genuine improvement over Metcard, which didn’t offer public holiday discounts.

For Myki Pass single zone holders, you get a discount on the second zone if you use it. For some crazy reason it’s equal to the 2-hour fare from the zone you paid for, so a Zone 1 Passholder going into zone 2 on a weekend gets charged 2 cents: the weekend $3.30 cap minus the $3.28 2 hour zone 1 fare… (I think it would have made more sense to apply the per day Pass fare that was originally paid — $4.02 in the case of zone 1. Oh well.)

But some types of Myki are issued free: these include the various free travel passes listed above, as well as to Victorian Seniors, and also Commuter Club (see below).

And of course the discounts most people do know about: if you’re travelling 4-5 days or more per week, check out Myki Pass options: 7 days (eg a weekly fare for the same price as 5 individual days using Myki Money) or 28-365 days.

And of course if you’re travelling most days and are prepared to pay a year in advance for the best discount possible, check if your employer offers Commuter Club (some will even offer it via salary deduction), or get it via the PTUA.

Another 5% + CPI rise has not yet been confirmed, but is expected in January. It used to be you could buy Metcards in advance to beat the rise. You can’t do this anymore — Myki Money fares are charged at the time you travel, not when you load the card.

But you can buy Myki Pass fares in advance. You can have two on a single Myki card at once; the current one and the next one.

And keep in mind if you want to buy a Commuter Club yearly to beat the price rise, orders take a couple of weeks to organise, and some organisations only place orders once a month…

When the price rise was officially announced last December, there was only about a fortnight during which Commuter Club orders were accepted at the 2011 price… in that fortnight the PTUA processed around 160 orders (most of them from new members), running the volunteers ragged by the end, and pumping over $180,000 through — it felt like we’d opened a money laundering service.

So if you’re going to order one, my advice is get in early.

So, what did I miss?

7 replies on “PT fare discounts you may not know about”

Whew! An exhaustive analysis, thanks. I couldn’t help thinking that it’s no wonder there isn’t enough funding of public transport – hardly anyone pays full fare.
PS I’m an early bird user, so I’m part of this problem!!

I agree, whew! Just the merest detail – this year Seniors Mykis were programmed to allow for free travel on Metro for the whole of “Seniors Week” (in addition to the weekends). The free travel has been available for some years, but my impression is that this is the first year it was programmed into Myki.

@gxh, good point! From what I understand, free travel on Christmas Day and New Year’s Eve is also programmed into Myki.

If you are travelling with children and at one of the Metro stations that sells V/Line tickets, you can take advantage of V/Line’s family traveller ticket, given that it includes free Zone 1 & 2 travel all day (even if you’re not even intending to travel outside of Melbourne).

A paying adult, even if they are using concession, can travel with up to 2 children for free all day Z1+2, and pay just $12.60 (or $6.20 if concession) by asking for a family traveller ticket for Melbourne to North Geelong off-peak return.

This also saves the hassle of buying your children mykis, if they otherwise would not need them, given that soon there will be no short-term ticket option.

@Samuel – Grrr… that they’ve phased out any short term-ticket AND kept paper V-line tickets only highlights the stupidity of the Baillieu Government changes. They’ll still need either someone at each gate allowing V-line travellers through or to leave the gates open, so why not just use the receipt printing facilities at Myki machines to print short term use tickets?

Also a group of 12 or more adults going the same places can travel on concession fares with a Prepaid Travel Authority. You do need to buy in advance, but this can be a very short time indeed if boarding at a Metro station. Longer notices is needed for V/Line and maximum limits may apply. See http://ptv.vic.gov.au/assets/PDFs/2011-Fares-and-Ticketing-Manual/Fares-Ticketing-Manual-Update-2011WEB-Ch04.pdf

Those on certain Centrelink payments (including the Age Pension) get mailed free travel vouchers which can be used for quite long distance trips. Victorian seniors get similar vouchers which are more restrictive (eg travel entirely within Victoria). These, plus the seniors week freebies, are cumulative so Victorian seniors on the age pension have several free travel opportunities per year.