Melbourne suffered traffic gridlock yesterday. It’s very important that the national government fund nationally important infrastructure. I have committed an incoming Coalition government to spending $1.5 billion to kickstart the East West Link project. I have committed an incoming Coalition government to $1.5 billion towards the WestConnex projects in Sydney. These are vital pieces of national infrastructure. They are very important if we are to have liveable cities in the 21st century and I say to the Prime Minister: stop sitting on your hands; be part of the solution, not part of the problem and commit to the transport infrastructure that the great cities of Australia need.

It wasn’t just on Wednesday that we had traffic problems, of course. Even on the least worst days, you hear people talking about the South Eastern Carpark just like the old days before it was fully grade-separated.

Back then, it was Citylink that was going to fix everything. People might have forgotten these ads: 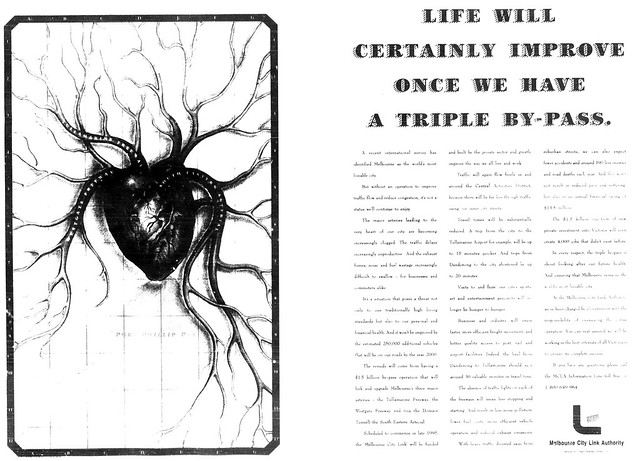 If you can’t quite make it out (sorry, it’s not the best copy), the heart is meant to be central Melbourne, and the “triple bypass” is the joining of the Tullamarine, Westgate and Southeastern freeways. 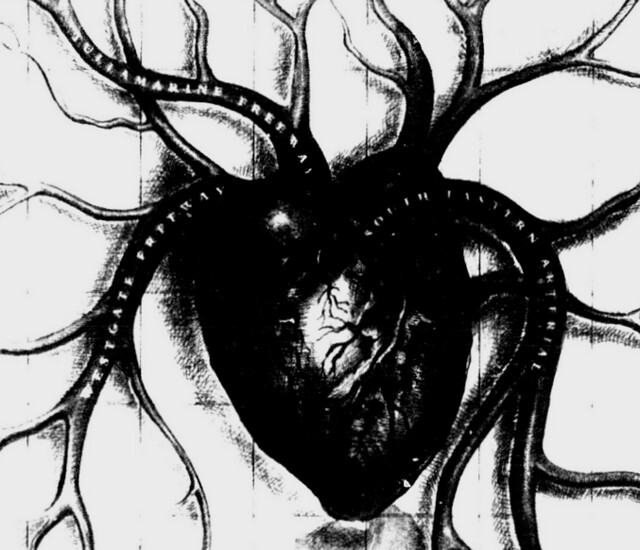 I’ve transcribed the text to make it easier to read:

A recent international survey has identified Melbourne as the world’s most liveable city.

But without an operation to improve traffic flow and reduce congestion, it’s not a status we’ll continue to enjoy.

The major arteries leading to the very heart of our city are becoming increasingly clogged. The traffic delays increasingly unproductive. And the exhaust fumes, noise and fuel wastage increasingly difficult to swallow – for businesses and commuters alike.

It’s a situation that poses a threat not only to our traditionally high living standards but also to our personal and financial health. And it won’t be improved by the estimated 250,000 additional vehicles that will be on our road by the year 2000.

The remedy will come from having a $1.5 billion by-pass operation that will link and upgrade Melbourne’s three major arteries – the Tullamarine Freeway, the Westgate Freeway and (via the Domain tunnel) the South Eastern Arterial.

Scheduled to commence in late 1995, the ‘Melbourne City Link’ will be funded and built by the private sector and greatly improve the way we all live and work.

Traffic will again flow freely in and around the Central Activities District because there will be far less through traffic using our inner city streets.

Travel times will be substantially reduced. A trip from the city to the Tullamarine Airport for example will be up to 15 minutes quicker. And trips from Dandenong to the city shortened by up to 20 minutes.

Visits to and from our city’s sports, arts and entertainment precinct will no longer be bumper to bumper.

Business and industry will enjoy faster, more efficient freight movement, and better quality access to port, rail and airport facilities. Indeed, the haul from Dandenong to Tullamarine should save around 30 valuable minutes in travel time.

The absence of traffic lights on each of the freeways will mean less stopping and starting. And result in less noise pollution, lower fuel costs, more efficient vehicle operation and reduced exhaust emissions.

With heavy traffic diverted away from suburban streets, we can also expect fewer accidents and around 190 less injuries and road deaths each year. And this won’t just result in reduced pain and suffering, but also in an annual financial saving of $135 million.

The $1.5 billion injection of new private investment into Victoria will even create 4,000 jobs that didn’t exist before.

In every respect, the triple by-pass is about looking after our future health. And ensuring that Melbourne remains the world’s most liveable city.

At the Melbourne City Link Authority we’ve been charged by Government with the responsibility of overseeing the entire operation. You can rest assured we will be working in the best interests of all Victorians to ensure its complete success.

Sounds great doesn’t it. In fact, maybe they should use the same blurb for the East West road tunnel.

It hasn’t, of course, turned out that way — even with a later $1.4 billion spent on adding lanes to the Southeastern and the Westgate. Every motorway is built on the promise of faster trips and all the benefits that go with it, but it’s only faster if traffic levels don’t grow — and the availability of all that road space inevitably induces more vehicles.

It’s simply not efficient to move people one-by-one in their cars*, and the last thing we should be doing is throwing good money after bad and building more roads to encourage more cars.

In the case of the East-West road tunnel, it might swallow $10 billion that would be better spent on alternatives, flood the city and inner-northern suburbs with cars, and do nothing to stop car dependence in the outer suburbs.

I’m not saying we should remove Citylink

It would be silly to say we should/could demolish Citylink. And one also wouldn’t say it’s had no effect whatsoever. Of course it has. Expansion of the road network is bound to.

The question is: where to from here? Travel demand continues to outstrip supply. Where we invest in capacity, it will be filled. We should invest in the most efficient modes, and in the modes we want to see grow.

Do we want the next surge in travel growth in Melbourne to be in private vehicles, or sustainable modes such as public transport, walking and cycling?

That’s where the money should go.

*Before I get comments from those who apparently carry heavy tools and other work equipment around with them in their vehicles, just remember the majority of people heading to work carry little more than their phone and a sandwich, OK?

This is exactly what we do in Anchorage, AK: we throw roads at things. We have a tremendously overbuilt road system (which is still growing), and the only reason that it isn’t choked with traffic is that we have relatively low population (300,000) and low density (66.4/km2 versus Melbourne’s 1567/km²).

Our main problem is not traffic as much as it is how far apart everything is. With “normal” traffic, it takes half an hour or more to drive from my house to the school where my daughter’s rehearsals with the youth symphony take place. My high school girlfriend and I lived 30 miles apart!

Mass-transit would help, but it is hopelessly inefficient in a town with such urban sprawl.

You are absolutely correct. Although I wonder if travels times have been much reduced for (say) someone living in Berwick who drives to the airport – it’s all on freeway whereas, prior to 1995, there were a lot of traffic lights.

Heart by-pass – brilliant analogy! Were they being deliberately ironic?

“Here’s a costly procedure to treat the symptoms of your unhealthy lifestyle.

“Don’t even think about improving your lifestyle with better public transport and cycle paths, etc.

“Obviously token public transport improvements are fine, like you did with Eastlink – painting a couple of desolate railway stations won’t actually encourage people out of their cars, and it fools some people into thinking you care.”

And now after this week’s CityLink “heart attack”, people are shouting for another by-pass and once again side-lining the urgently needed lifestyle change, like Doncaster and Rowville rail.

Wow, 4000 jobs! I wonder how long they lasted; how many people does Citylink employ today? I suppose as long as we keep building roads, we can keep people employed — what an excellent formula. Certainly sounds sustainable; an excellent basis for an economy.

@Simon, good question. It’s probably in Transurban’s annual reports somewhere, though they run a lot of other toll roads as well. http://www.transurban.com.au/345.htm

I thought the redeveloped on ramp from Kingsway to the Westgate would alleviate the evening bank up of traffic back along Kingsway, Queens Road and St Kilda Road. It didn’t, and it is even worse than ever now.

Citylink did solve A problem. It solved the somewhat ridiculous situation that the only way from Mentone to the Airport was by driving down Swanston Street. And at solving that problem, it is still quite reasonable, provided the tunnel is open and you don’t mind the toll.

There are a lot of other problems it hasn’t solved, and wasn’t really designed to solve.

This business of calculating traffic lights bypassed is a scam.

Nick Greiner’s plan for his dodgy new freeway claims 52 lights will be bypassed. But that is a route that no sane person would use. The quickest current route has only 23 sets of lights.

The biggest problem with Citylink as a concept was the closure of “competitive roads” so that people were strongly coerced into using the toll road. I am not saying I believe more roads are the solution to moving people around, but I am saying that any roads that are built should be planned carefully and not created at the expense of existing routes. Additionally there should be contractual limits on what can be charged according to the actual “saving produced”. The predicted “savings” from using the tunnel for example were nice in theory, but the reality is that the service does not deliver real savings during peak times with such a high toll rate and so little saving of time if at all.

So was the tunnel closure a conspiracy to encourage the East-West tunnel being built? — I guess that’s already been suggested.

But the thing about roadways is that Melburnians have demonstrated they’re willing to put up with a certain level of congestion. They continue to drive on Citylink when it’s congested, just like they drove on the South Eastern when it was congested. Building the road just makes more space available to reach the level of congestion we’re willing to put up with. Anyone who’s unhappy with that level of congestion has alternatives: for instance, commuters can relocate or change jobs. And the unbelievable cost of housing closer to the city suggests that’s what a lot of people want.

But I’ve never once seen anything that’s ever suggested the East-West tunnel will be an economically worthwhile plan. It’s the sort of road that ought to be built by private funds, so neither federal nor state governments should spend a red cent on it. Even if they need to certify it as safe, they should charge whoever builds it.

Has anyone ever suggested that the proposed tunnel will pay for itself, or is it supposed to be subsidised?

Really, the sensible thing to do would be to sell off most of Hoddle St and other excessively wide roads, and build mid-rise mixed-use buildings on narrow shared-zone streets that encourage walking and discourage driving with plenty of public transport around until inner city housing costs are reasonable.

Does anyone have the CityLink TV advertisement recorded circa 1998? It showed a single, solitary prestige car cruising down the CityLink at speed while the voice-over spruiked about just how wonderful it will be to drive on this beautiful, unclogged freeway.

If anyone does it would be well worth uploading to YouTube – it’s long since revealed itself to become a totally ludicrous deception.