Yet again we have public figures extolling the virtues of technology over service in public transport.

“If I was able to wave a magic wand even now, I would start the planning for an underground rail system,” he told the Australian Property Institute Pan Pacific Congress in Melbourne on Tuesday.

“It would cost hundreds of millions of dollars, but I can assure you when you look back in 50 years, or 100 years, whatever you pay today would seem cheap.

“We can hardly accommodate the traffic on the surface of our community in an efficient way and it is only going to get worse.”

It’s great that the bloke behind Citylink (the inner-urban motorway that was meant to fix Melbourne’s traffic — but didn’t) now understands that to move people more efficiently around big cities, you can’t do it with cars.

But without knowing exactly what else he said, he seems to not have realised that the (mostly European) cities that have underground railways have them because the city developed before the railways came.

In Australia it’s the opposite — the railways were built as the cities developed, so naturally the railways are at ground level because that’s the cheapest option.

The proposed Melbourne Metro tunnel is only a tunnel because now the inner-city is built-up, and if you’re going to do expansion of track capacity and serve the hospital precinct and St Kilda Road with heavy rail, it’s got to be underground.

The benefits of European rapid transit/metro systems aren’t because they’re underground (many aren’t outside city centres). The benefits are from having high-capacity, high-frequency services meaning large numbers of people can move quickly with minimal waiting, at any time of day, providing the sort of freedom of mobility the motor car can offer (better, in fact, given traffic levels in most cities).

This can be done with Australian suburban railways, by simply running more frequent trains all day every day, along with level crossing removal, and better connecting feeder buses to make more trips viable without a car. 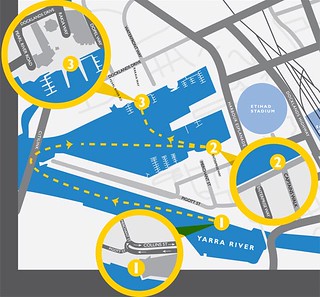 At the launch of “Team Doyle” this morning on the banks of the Yarra River, lord mayoral candidate Mr Doyle said the ferry trial would cost about $500,000, would run five times a day and take about thirty minutes to sail between three stops.

Mr Doyle said existing water taxis and ferry services mainly operated on weekends and the new service would help workers who want to travel around Docklands.

Aimed at workers? What Docklands workers are going to wait 1-2 hours for a ferry, which will take 30 minutes to cover a distance they could walk in 17 minutes?

Tourists would probably like it, but for workers/commuters, how does this solve anything, except perhaps for a struggling ferry operator who would appreciate $500,000 a year in revenue?

Sorry Robert, but unless vital information is missing, this idea makes no sense at all.

It’s not about infrastructure

When will our leaders figure out that better public transport is not about digging tunnels or exploring new modes such as ferries? It’s about dependable, well-connected, capacious, safe, fast, frequent services.

If a ferry or an underground railway or a maglev or a monorail is being proposed, the first question should be: does it cost-effectively deliver on the basic requirements of good public transport and improve mobility? And is it better/cheaper/quicker than upgrading what we already have now?

10 replies on “Ferries and underground railways!! … But why?”

I wonder to what degree the fascination with new expensive infrastructure is due to wanting to have something flashy to offer the voters. My suspicion is that the answer is “Mostly”.

A ferry??? Hmm, what party does Clem Newton-Brown belong to? 5 trips a day is a pathetic schedule that is designed to fail and thus kill the notion into the future.

Half a million subsidy? would like to know who the directors and shareholders of the putative operator are!

The ferry idea is probably just Robert Doyle looking at Sydney, Brisbane, Perth and other places and saying “they’ve got something we don’t, so there’s something wrong”. But a ferry in Melbourne makes about as much sense as a freeway in Antarctica.

And while I would really like the Melbourne Metro tunnel to get built, we need to make better use of the space around our train stations. And considering someone’s going to loudly insist that there’s heritage value to the existing stations, you know it’s just never going to happen.

I initially thought the idea of a ferry was for tourists. If it’s meant to be for commuters, you are right, it is laughable. Albeit, an expensive laugh.

Even for tourists, that ferry is ridiculous. There are plenty of better options if you just want to get on a boat and look at some stuff.

As for commuters, I have no idea who’d want to commute between those spots, and if they did, they’d walk or get on a tram.

I hadn’t looked up where the proposed stops are; I think Robert Doyle would get more bang-for-buck by just handing $500k to the developers that own the properties the ferry will stop at…

How about a similar story about technology and stations?

Recently I saw an article saying more stations should be like Southern Cross (grand but full of diesel fumes) and Melbourne Central (harder to get into than the old version). In both cases, I am hard pressed to see how the service has improved for these stations, but they both certainly use more technology.

I’d rather people talking about subways and ferries than have our transport minister bestowing the virtues of more road tunnels after yesterday’s CityLink debacle. At least they’re thinking on the right track (pun fully intended)

How long is Merchant Street ? That route is silly. Now if they could build a ferry to Yarraville or Fishermans Bend, that might be useful.

And rail passengers deserve sunlight and views too!

One of the issues with the hub and spoke layout of Melbourne’s metro system is that issues in the central part of the train system have a knock-on effect. Service will continue to struggle unless it is decoupled, or maintenance efficacy improves; ideally both occur.
It would be worth having ferries from Geelong or Mornington assuming there was sufficient demand. Don’t see it in the docklands.