So, how has Melbourne’s “boardings per person per year” gone over the years?

Thanks to PTV putting out their “Patronage Long Run Series” report of patronage since 1946, we can see it — I’ve plotted the total boarding figures from 1946 to 2011, every five years (in red) against the boardings per population (in green): 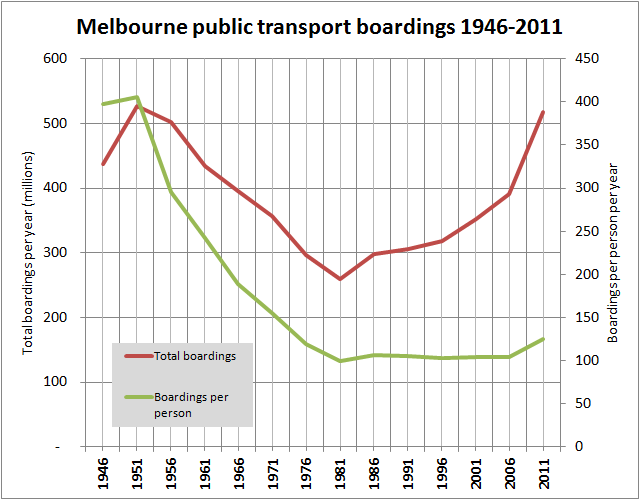 There are some caveats to these types of figures, which I alluded to on Monday:

Hopefully though you can see the trend. PT use was high in the 40s, dropping rapidly into the 60s and 70s. I think we can assume the spread of the motor car — and specifically, measures that made it easier to drive, such as huge road expansion, and planning policies that made it harder to get around without driving — were to blame.

Patronage recovered somewhat in the 80s (the introduction of multimodal ticketing probably helped), and rose through the 90s. Total boardings climbed moderately until about 5 years ago.

Now here’s the last ten-ish years, plotted every year (not every five as above), using preliminary figures for 2012: 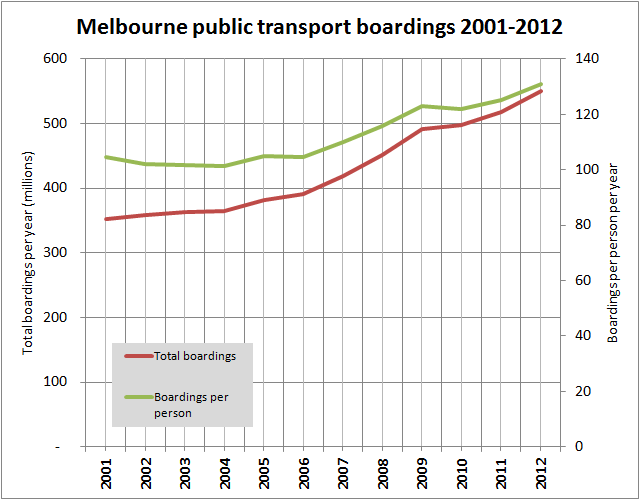 It’s quite pleasing to think that not all the growth is due to population growth; that people are actually using services more.

That in turn is down to a few different reasons, explored in Alan Davies’ recent blog post on this topic… though to my mind the ABS survey he’s found doesn’t really touch on issues such as improving service quality (eg frequency, and wait times) which in some cases has improved markedly in the past 6-7 years, for instance more frequent trains on most lines, and more Smartbus services.

One reply on “Melbourne PT: we know patronage is growing, but what about per person?”

Great charts! thanks.
The figures imply that revenue from paying customers must have increased more than anticipated (since boardings growth exceeded expectations). Is this the case? If so, doesn’t that mean Yarra Trams and Metro have got far more revenue than originally planned? Or does the unexpected revenue go to the government?