Fifty years ago the people waiting on this bench might have been smoking — now they’re all fiddling with their phones. 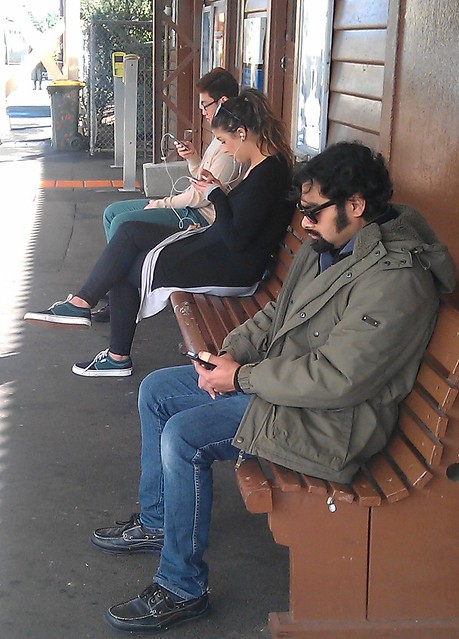 It’s long been thought that mobile phones might be replacing cigarettes:

Teenagers may be getting healthier because mobile phones are replacing cigarettes as a symbol of rebellion and fashion.

Clive Bates, Ash director, suggested that the need to stay in fashion by owning a phone may mean less money is available to pay for cigarettes.

This Age article from 2005 suggested the same thing.

Phones, like cigarettes, are social. Instead of standing around in doorways chatting to fellow smokers, you’re talking to your friends via social media — wherever they are.

Phones, like cigarettes, can be invasive if used thoughtlessly in a group of people (though having to listen to someone’s boring conversation is less unhealthy and unpleasant than secondhand smoke).

I’d love to reach some profound conclusion here, but that’s all I’ve got. Thoughts?

7 replies on “Are mobile phones the new cigarettes?”

However, it could be that waiting for trains is so interminably boring – especially with the lengthy gaps between trains here – that having something to read on your phone helps pass the time quickly. I’d say a phone is more akin to a book, but conveniently sized.

Good observation, Daniel.
Smoking rates among young people have declined significantly. it would be difficult to conclude that any ONE factor played the most significant part. I agree that giving people something ELSE to focus on, other than lighting a ciggie, has been a factor.
I always take a book with me to read as, like Paul, I get very bored with nothing to do

Undermining smoking and driving. Two positive effects of the mobile phone and increasing with time as phones can do more.

Phones, like cigarettes, are highly addictive, becoming habitual default options when being in between things.

I’ve been consiously trying to avoid my mobile phone snacking whilst waiting for trains, coffee, etc as i found i had lost those moments during the day to just think and to let your mind wander through what is happening.

by constantly snacking on the phone at these moments, ideas for the wekend, dinner or just how to fix a problem thats been bugging me were all being lost as my mind was always occupied.

And on the dark side, what about the use of mobile phones could increase the risk of cancer?

@craig I was waiting for someone to mention cancer; the science says No (and epidemiology).