After breakfast we had a walk around the beach close to our accomodation. It was windy, and pretty bleak to be honest. What we hadn’t seen the night before thanks to it being so dark was that there was a considerable amount of recent fire damage to the surrounding scrub. Apparently the fires late last year had got very close to where we were. 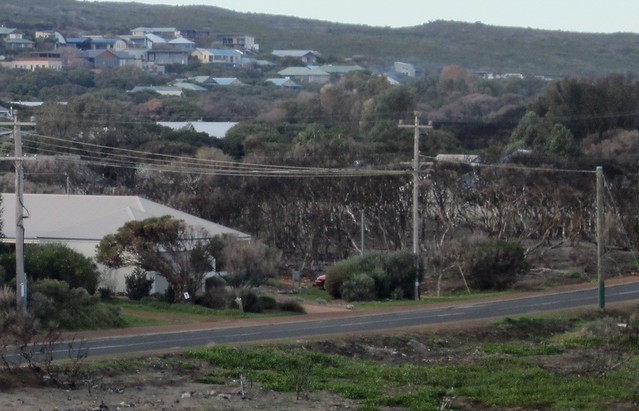 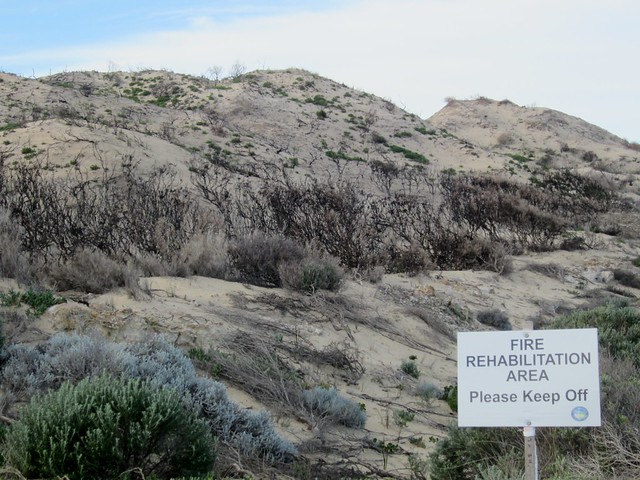 We jumped in the car and headed initially south back towards Augusta, filling up with petrol at an old-style service station (though not so old-style they served you) at Karridale. In fact there was another one nearby branded Ampol — a name I haven’t seen in quite some time; I thought they’d all become Caltex.

I had to laugh at a dingy wooden shack adjacent to the service station, which was a bus shelter for TransWA (the government operator) and also bore a sign proclaiming it to be a South West Coach Lines/Veolia (the parent-company of departed Melbourne train operator Connex) “luxury express coach stop”. I can only hope the coaches are luxurious, because the stop wasn’t. 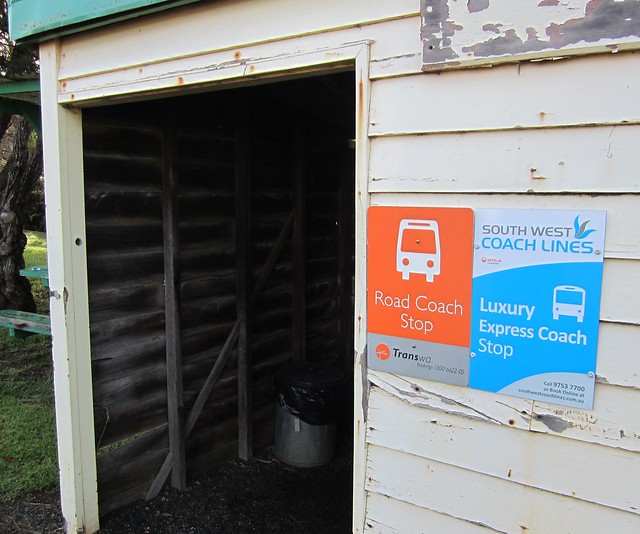 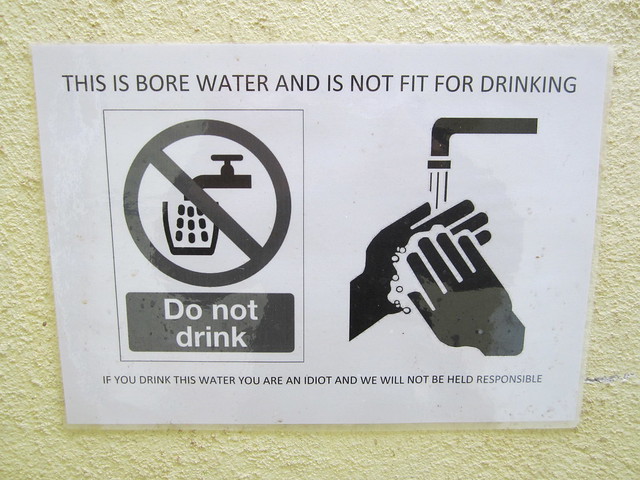 About 90 minutes on the road headed east (the Brockman Highway, I believe named after Kent Brockman from the Simpsons… or possibly not) brought us to our destination, the town of Pemberton. A quick stop off to use the loo and pay a national park entry fee, and we headed for the Gloucester tree. 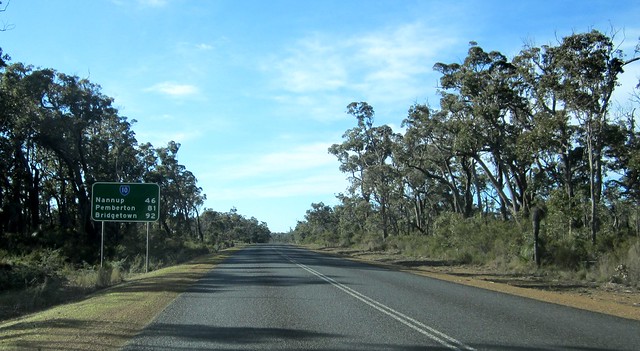 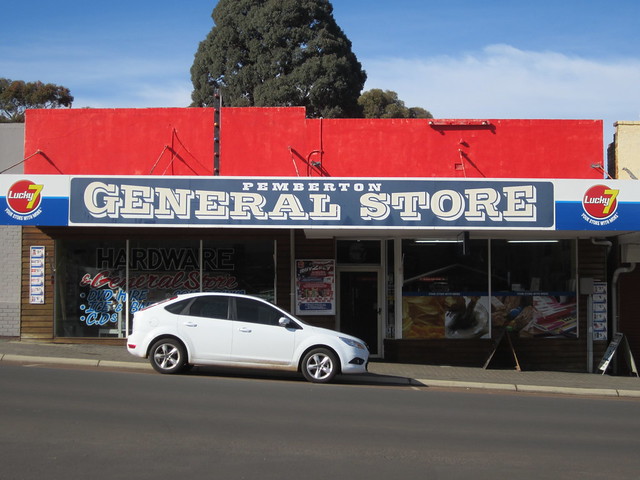 I must thank the readers of this blog, who had suggested the Gloucester tree. We looked up and around it, and finally decided that Jeremy and I would go up; Isaac and my aunt decided to stay on terra firma. 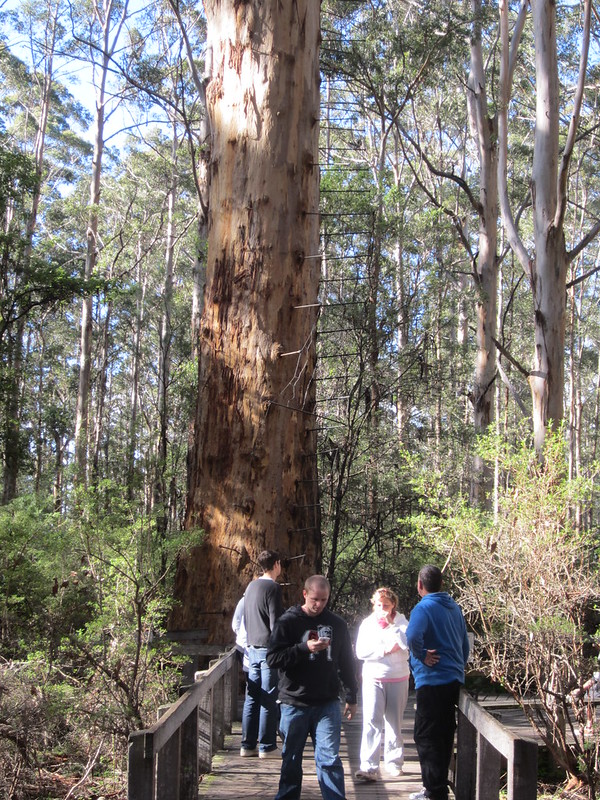 The steps are just metal bars stuck into the tree. There’s also wire — I’d hesitate to call it a mesh because it’s so wide — to prevent you falling out or off the steps.

If you go all the way up, it’s 61 metres. Yikes. (It appears that some consider 61 metres/200 feet to be the minimum height for a building to be considered a “skyscraper“.)

Once I’d started, I tried not to look down. In fact if I’d been on my own there, after a few metres I probably would have been tempted to stop and go back down, but I kept climbing. 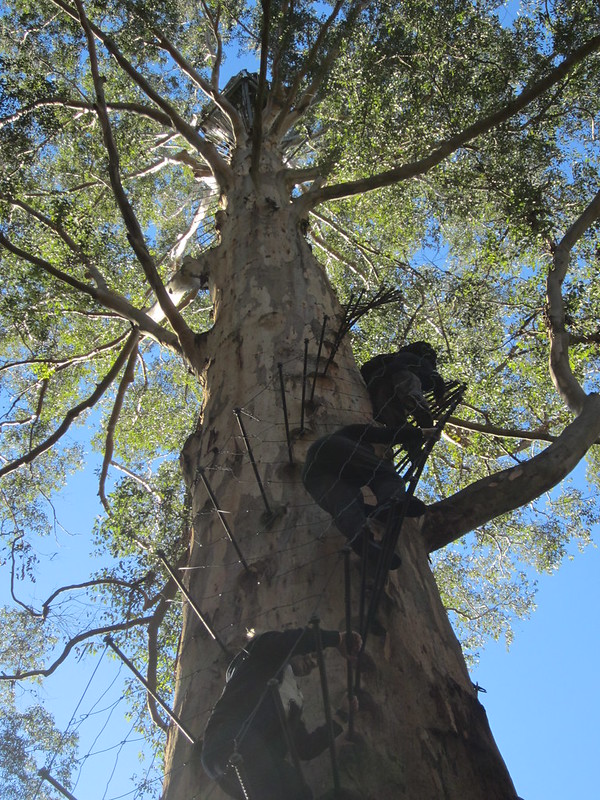 We encountered another group coming down, and “hugged the tree” while they went past. One guy remarked that he’s terrible with heights, and if he could do it, we’d be fine… so we kept going.

We reached first platform at the top. From there you go a bit higher via more steps and a ladder until you reach the very top.

The view was terrific. You’re above the tree tops (which is the point of course; it was designed as a fire lookout). I could see the other trees moving in the wind, but the viewing platform appeared to be rock-steady.

Then I realised we were above the tree itself, which made me a tad nervous.

Another kid arrived at the top, having left his parents at the bottom and climbed up. 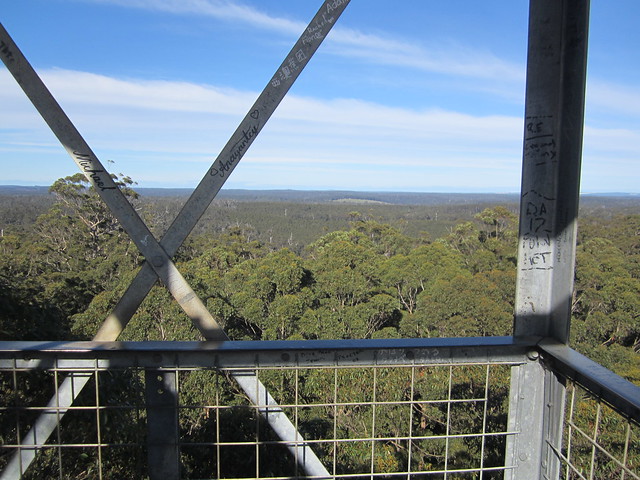 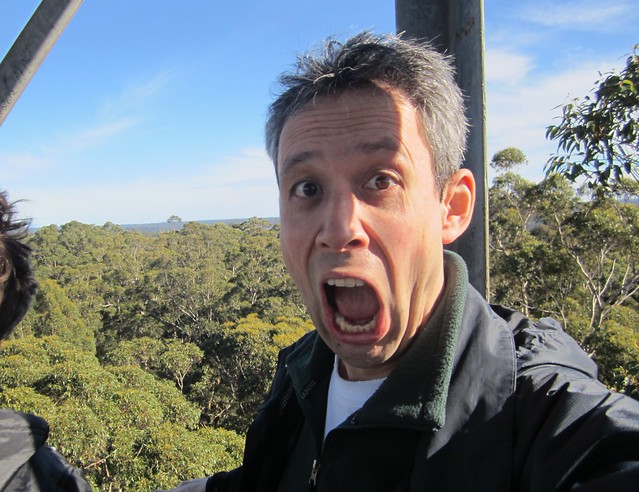 After a while we headed down, which was harder, because you can’t see the next step without looking down. I tried to focus on just the steps, not the fact that we were many metres off the ground.

It was something of a relief to get back to ground level.

We headed a few kilometres over to the next tree: the rather less-regal sounding Dave Evans Bicentennial Tree, which is even taller. Alas, it was closed for climbing (though secretly I was rather relieved, as my legs were still wobbly from the Gloucester Tree.) 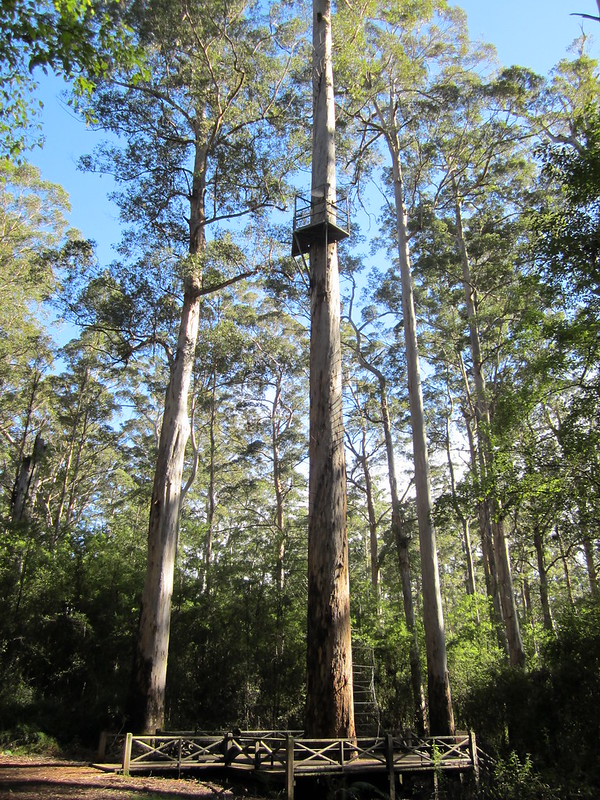 Nearby we found something odd: an old arcade game cabinet in a shed by the side of the road, with the signage “Fruit and Veg”. Odd. 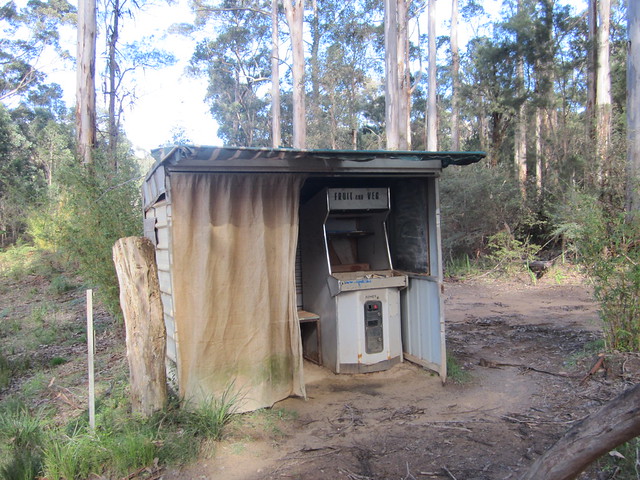 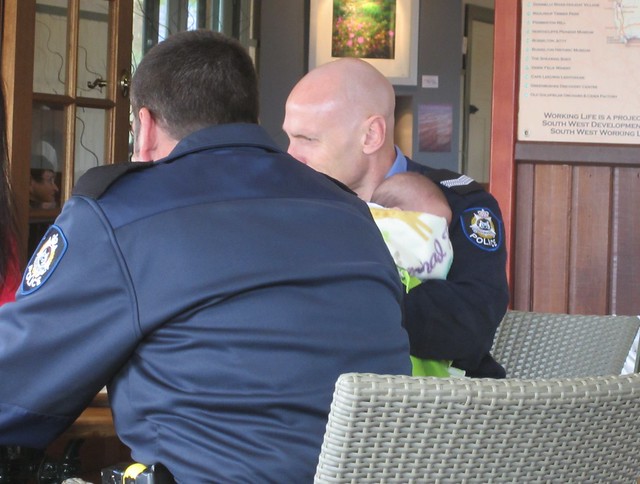 We went back into town for some lunch. In perhaps a scene which you see more often in country Australia than in the big cities, two cops strode in, ordered lunch and ate it with their families, one holding his tiny baby on his shoulder.

The intention was to then ride on the Pemberton tramway, which (similar to the one in Walhalla) heads out for a tour around the nearby forest. Alas, like Dave Evans, it wasn’t functioning on the day we were there. The lady in the booking office said there was some problem down the line, aluding to tree branches having fallen on it or something of that kind. Oh well.

We took a look at some of the old trains stored nearby… there was one familiar logo on a diesel locomotive. 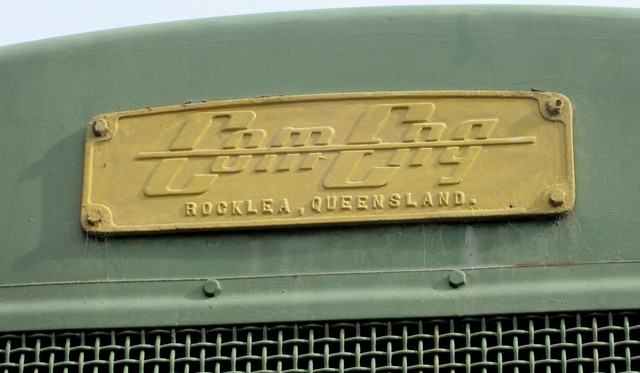 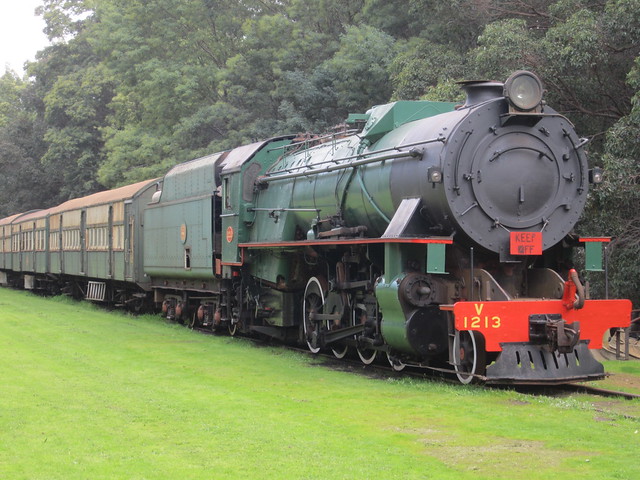 So we headed back towards Margaret River to start our run at the “Grand tour” of three of the caves in the area. There are many, many more, but my aunt reckoned these would give us a good taste of three distinct caves, without being overwhelmed/bored by them. First was Jewel Cave.

The tour guide moved us through the various parts of the cave, while explaining the features as we went. I don’t think I’ve ever been inside a cave before, but Isaac has — on a school camp. He said this was quite different, and much bigger. Quite spectacular. 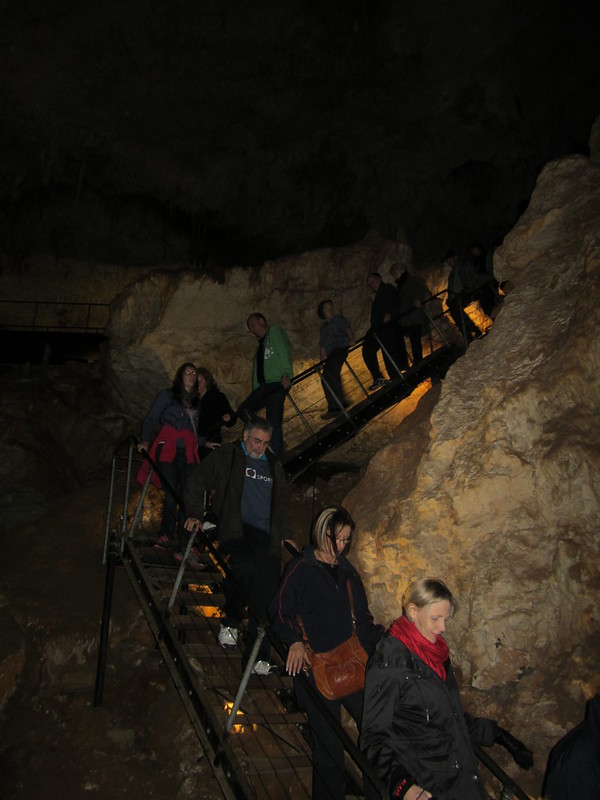 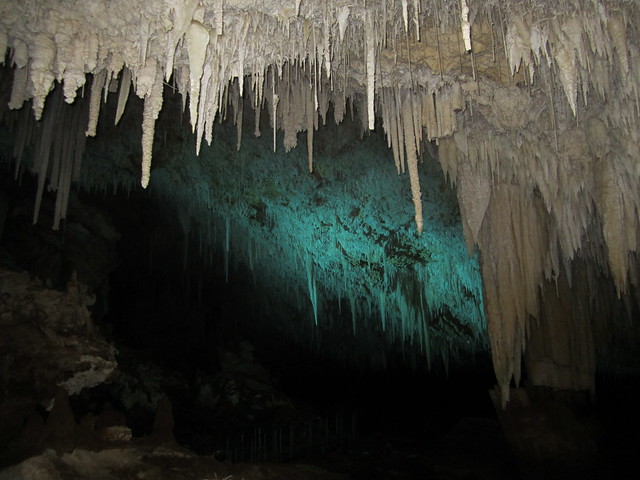 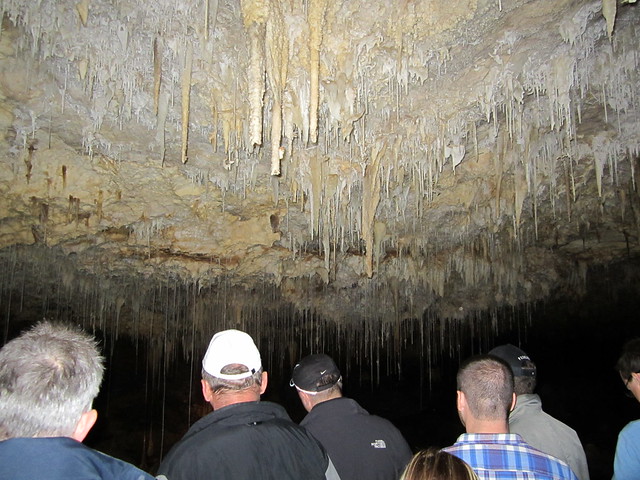 After that, back to our hotel room for some relaxation before out for dinner in Margaret River — yes, the Settlers Tavern with its free wifi again. (Hint: don’t get the nachos if you’re very hungry. They’re tasty, but not a big serve. Other than that, no complaints about the food though, and they gain extra bonus points for the wifi and prominently placed free water. I’d go back.)

thanks, another of your colourful and entertaining pieces. Yikes! indeed. I’m surprised that OHS laws allow people to climb up that tree.
PS Was (free) drinking water available in the town where the “do not drink” sign is? If not, I suspect it’s a ploy to get you to pay $3 for a bottle of the stuff

And they let you use a flash in those caves? That’s not usual for a cave because supposedly the cumulative effect of millions of camera flashes can damage the cave formations.

@Philip, the guide specifically said that camera flashes are okay, but not to touch any of the formations.

Camera flashes will upset bats, glow-worms and other insects.

In the old days before modern flashes were invented, photographers would use magnesium flares, kerosene lanterns, parboiled penguins and various other contraptions to make light, these would leave soot and other materials on cave interiors which can still be seen today.