Last month the total budget for Myki (over ten years) quietly got increased, from $1.35 billion to $1.5 billion. It was revealed in the Budget Papers, and thanks to the torrent of other budget coverage, barely got noticed:

MELBOURNE public transport commuters received little relief in this year’s budget, which revealed the cost of the troubled myki ticketing system has blown out by another $150 million.

It seems to be a combination of the extension of Metcard (a result of the stalled metropolitan rollout, which was originally meant to be finished by Easter 2011, but is now expected to take until the end of 2012) and extra readers and vending machines. 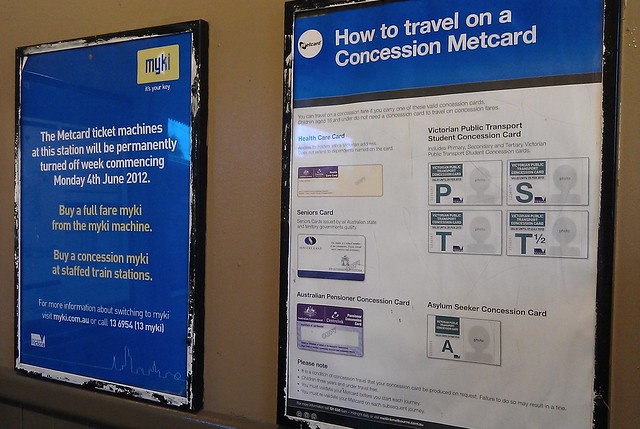 The transition to the myki ticketing system is to be completed following an extensive review undertaken by independent experts in 2011, leading to re-scoping of the project and a number of system improvements.

An increase from $1.35 to $1.5 may not sound like much until you realise that’s a difference of $150,000,000, or to put it in words so it sounds even more impressive: One hundred and fifty million dollars.

And it flies in the face of earlier implied savings found through the 2011 review, the most visible result of which is the removal of short term ticket options (not what I’d call “system improvements”), in particular from trams.

Sigh. Oh well, at least $1.5 billion is a nice round number.

It now (well… it again) raises the point at what point did they originally think it was cost prohibitive to take an off the shelf tested and proven product and adapt it to suit Melbourne?

I haven’t rravvelled a lot since Miki became a bit more used, but last few days I have travelled in eavening peak. It woulkd seem to me that the quickest and easiest solution to delays swiping off at station could be simply solved by having more terminals and spread them out a bit. This appears to happening at some stations, but at Essendon they seem to be hung up on ensuring everyone filters through two very small gateways with readers on each side. If one person has a difficulty with swiping off, the resultant backlog of people can be huge. However, if their were terminals futher down the platform (not physically related to the gateway) then this would allow people to swipeoff before they had to go through the gate. The concept of a ‘validated’ area is a bit of an anachronism in this day and age.

On another semi-related issue, Essendon really needs another way to access the centre platform, in busy times the ramp is easily clogged by people queuing up to by a ticket and, of course, where are the Miki top up machines…. on the ramp itself, thus clogging it up even more.

My impression is that when the Liberal government came into power they basically deliberately stalled Myki and just added to the delay and extra costs – and tried to get away with making a bad mess worse, and blame the whole thing on the previous government. Whereas in fact if Labor were still in power, Myki would be in a much better state right now.

In fact I still don’t quite understand why they scrapped short-term Myki tickets. They work great in Geelong, the only problem is that they aren’t much dearer then paying with Myki, so not enough people bother to get one.

Did the government ever release the documents on the Myki ‘review’?? Or did they decide releasing them wasn’t in the public interest. I’d just like to know who these ‘experts’ were and a detailed analysis of why they got rid of the short term tickets.
I have to say that i’m disinterested with all sides of government when it comes to proper forward vision regarding transport. No one is worth voting for in my book..

I would think Jason it is not just the cost of the tickets, you also need machines to dispense them. Ticket dispensing machines need lots of fiddly little parts in them which break and jam. If you can get rid of the moving parts, you can save a lot of money.

enno – Pity they’d already bought a lot of those machines for Trams. Some had even been installed (although were not operational). Now I understand not throwing good money after bad, but realistically you need to sell short term tickets. It’s insanely stupid not to. No doubt they’ll decide to introduce them in 2 years after Metcard is completely turned off, and there is a shitstorm of complaints from every tourist, out of towner or very casual user, and then we will have paid for either storage of devices we decided not to install, or the difference on buying them, returning them and buying them again.

I would not be surprised if the total cost of myki after 10 yearas is much closer to the $2 billion mark. There are always more unexpected costs, and the system clearly isn’t working properly yet.

@enno, that’s a true point, but only really for trams. I think it is a safe bet that the Myki machines installed at every train station were already designed to dispense short-term tickets, and likewise for the bus drivers’ Myki consoles (as exists in the buses in Geelong and other regional cities).

The main added cost would be to install the ticket machines on trams (and Julian has pointed out many machines were already bought and installed). Even if they charged an extra $2 for a short-term ticket over the equivalent Myki fare, it’s still better than offering no solution at all.

And in any case, if ticket machines on trams really are too expensive, they could still offer short-term tickets everywhere else, and just make trams the exception.

@Jason, yeah I reckon they should do like Brisbane and keep the short term tickets with a big surcharge (or even better, drop prices on Myki). By all means make them more expensive to encourage people onto smartcards, but make the option available.

It’s unclear if they’ve already pulped the short term ticket stock. One viable alternative should have been to provide a paper ticket, using the receipt-printing technology in the machines. Again, this is what they do in Brisbane.

@John, no, they never released the Myki review documents. Greg Barber from the Greens launched court action to try and get it out. No result yet.

@Julian, they bought a bunch of tram machines, but it’s unclear how many. As far as I know, only one was ever actually installed, for testing purposes (because they were intended to replace Metcard machines). Here’s a picture of it: http://www.flickr.com/photos/ptua/6328924990/

You may be joking but, thinking and premoting actions like that make the a bad situation a lot worse, shameful!