I know of people saying the only thing they don’t like about Myki is the requirement to touch-off. This is particularly a problem at suburban stations in the evening peak. Some stations end up with queues due to inadequate numbers of readers.

There are three main situations where it doesn’t matter if you don’t touch-off. That is, you will end up paying no more.

1. Myki Pass, on trains, trams or buses, most cases

If you’re on a Myki Pass (eg a weekly or 28-365 day pass, the equivalent of a Monthly or Yearly) and your trip started in a zone covered by the Pass (eg it’s your usual trip), the default fare is $0.00. You’re not going to be charged any additional money if you don’t touch-off.

3. Myki Money, on trams, most cases

This is the one everybody should know about, because it’s been publicised a fair bit, but you still see people needlessly touching-off on trams.

The default fare on trams is a Zone 1, 2-hour fare. This is the appropriate fare for almost all tram trips. You don’t need to touch-off. The only exception is if your trip is within the zone 1/2 overlap (on routes 86, 109 or 75) and you specifically want the cheaper zone 2 fare. 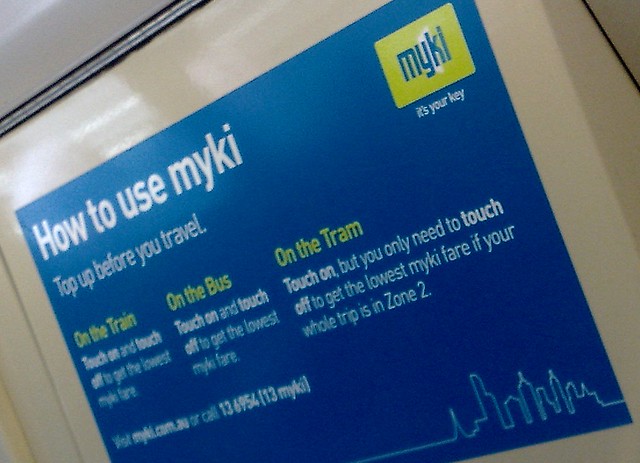 The mantra is “touch on, touch off” — because that’s the easiest thing to remember. But for regular passengers, if your normal trip falls into one of the above categories, you may be able to save yourself a bit of queuing/hassle.

PS. Note that if you don’t touch-off, it’s at the next touch-on (which might be the next day) when it charges you for the previous trip, and displays that amount. This can confuse people at first.

(I’ve written on this topic before, but arguably that post was too wordy, and right now a lot more people are coming onto Myki, so it’s worth revisiting.)

23 replies on “Myki myths 2: Everybody always has to touch-off, every single time, or they’ll be penalised – Nope.”

I still touch off on trams for two reasons:

aaah … I’d been wondering why the remaining credit on my card as reported on the myki reader didn’t make sense … at touch-on it seems to report the balance _before_ your trip, but on the next touch-on displays it after the previous trip has been deducted … imho this is wrong, as it would be more useful to report balance after the current trip but the system doesn’t know how far you’ve gone yet and can’t report that accurately. It might be better to not report balance at all at touch-on … or at least be explicit and say this value was from before you started your trip …

Clarification, please. You say the “default fare” is a 1+2 two hourly on a train. Does this get altered into a 1+2 daily if you make another trip later on in the day? Will this alter an earlier 1+2 two hourly into a daily if possible? Or is touching off necessary if you’re making more than one trip in a day?

I’d much rather instead of balance, it told you the fare you were currently on… ie first touch on might be ‘2 hourly zone 2, expires 10am’, touch off in the city would then say “2 hourly z1+2 expires 10am”, if you touch on at lunchtime would show “current fare z1+2 daily, expires 3am tomorrow ” (travel as much as you like today!).

Instead, we get “current balance 14.38, 3.32 deducted”. How does that help me without a conversion table for how much each type of ticket costs?

Dave, that’s exactly my biggest isue with Myki. No-one knows how much each trip is costing them anymore, and they don’t know how long they can travel for “free” (until their current 2-hour fare or cap expires of course).

Many people I’ve spoken to think that they are now paying for each trip separately under Myki Money, and this can only drive down public transport usage.

Along with Daniel’s favourite issue of the touch-on/touch-off beeps being the same, displaying the expiry time of the current ticket is the biggest change I’d make “if I was emperor” :-)

I touch on and off at the end trip so that my transaction log records this habit. This practice is useful in the case of fare disputes which have occurred on some occasions where I have touched off at the end of a train journey but the system fails to record it and charges a default fare.

mike – don’t hold your breath. I raised it with myki customer service when I had to get them to fix a few incorrect charges about 18 months ago. They said even back then – ‘yeah, most people ask for that’.
With their superb customer-responsive culture, I’d expect these features sometime close to the life expiry of the system.

“The Age” has picked up this story today.

Who comes up with these dodgy sub-headlines, Marshall Baillieu ?

For user who uses tram and train, you still have to touch off when getting off from the tram because the barrier at the train station won’t let you in when your Myki has an open transaction. Found it the hard way.

@Bennie, no.. I did this today in fact. If you couldn’t get in through the gate, it would have been a different problem.

If one has a zone 1 or zone 1+2 myki pass, does he/she have to even touch on on trams? In metcard one did not need to. It is very convenient.

@Saikat – if you’ve a pass, you’re probably required to touch on, but if it’s a currently valid pass, I doubt you’d ever get fined. I certainly don’t bother if the tram is very crowded – there’s no benefit to me and a lot of inconvenience to others.
I’ll still touch on at other times though to help with journey statistics – I’d like them to keep running those offpeak services!

[…] “don’t swipe / don’t wave / don’t tap tap” message, as well as the sometimes incorrect “always touch off, even if the barriers are open” spiel.The same kind of message is […]

[…] by passengers until ticketing equipment is installed.As a result Metcard and Myki pass holders who don’t need to touch off still have to wait in line behind people who do want to touch off. I wonder how long until someone […]

Can you confirm how the default fare works on busses? The myki site says that you only pay for a 2 hour ticket in the zone that you began the journey in. If this is the case then why would you touch off when begining the journey in one zone and disembarking in a different zone? You’re just going to end up paying more…

@Samuel, that’s how it works at the moment, but when the system is fully implemented, the default fare (for Myki Money) will be “to the end of the service”, eg a two-zone fare if it’s on a bus that is travelling across zones. (This is related to Myki’s Headless Mode.)

Thanks for this post. I can’t stnd how the myki system works, I feel that they’ve made such a simple system so complicated. The EZ-link card system in Singapore works beautifully and is also more economical for both daily and occasional commuters. With Victoria’s public transport system constantly increasing in price with little to no improvements really makes me more and more dissatisfied with the service and value of what I’m paying for. I also agree with Dave about.not knowing what my trip has cost me and when it will expire. Im not particularly fond of not knowing what my balance is when getting out of a train station unless I check at the top up booth.

Note: If you have a pass and don’t touch off at a train station then try to touch on to use the train again (that same day), it will touch you off. Just be aware.

I’m well aware you don’t need to touch off on trams in Zone 1, but I do it anyway (provided I’m not holding anyone up), and it has nothing to do with making the Myki statements look pretty. (I think the Myki statements are fairly hideous-looking whatever you do.)

Rather, it’s because I’m inclined to be a bit absent-minded, and I’m trying to acquire the habit of always touching off so that I’ll remember to do it when it really is needed.

I’m using Myki money these days rather than a Myki pass, and I make about 80% of my trips by tram, about 15% by bus, and about 5% by train. If I never touched off on a tram, then I’d be likely to forget to do it when exiting bus or train. Especially buses.

In fact, in the early days of using a Myki card, when I wasn’t yet touching off on the tram, there were two or three occasions when I stepped off a bus and only then realised I hadn’t touched off. Fortunately, the bus hadn’t moved away yet and I could re-enter and touch off. But it was a bit embarrassing. Since then, I’ve always touched off, even on trams, unless it’s crowded and I’d be holding people up.

@Gus, it will only do this if the next touch is within two hours of the touch-on.

Generally (eg after two hours has past), the next touch will touch you on (and tell you a fare, generally $0.00, has been incurred in the case of a Pass).

I’m a bit confused and need some clarification. Only just got a myki card yesterday and had the rest of my yearly Zone 1 metcard transferred across.

I only travel daily on the train to Parliament and back, all in Zone 1.

According to point#1, “Myki Pass, on trains, trams or buses, most cases – If you’re on a Myki Pass (eg a weekly or 28-365 day pass, the equivalent of a Monthly or Yearly) and your trip started in a zone covered by the Pass (eg it’s your usual trip), the default fare is $0.00. You’re not going to be charged any additional money if you don’t touch-off.”

Q1) What do you mean by in most cases?

Q2) From @Gus question and your response regarding touching on on the same day, how long do you have to wait (within that 2hr touch on), after touching off, to be able to touch on again?

Thank you for your help.

Q1) the heading says “in most cases”, and then the text below it qualifies that. The important point here is that it is if your trip started in a zone covered by the Pass.