There’s a good view from North Melbourne station of the works on the new Regional Rail Link line that will come in from Sunshine and the western suburbs, bypassing North Melbourne (unfortunately, with no interchange platforms) into Southern Cross. The idea is that V/Line trains will be able to bypass the suburban tracks, allowing both more V/Line and Metro trains to run. 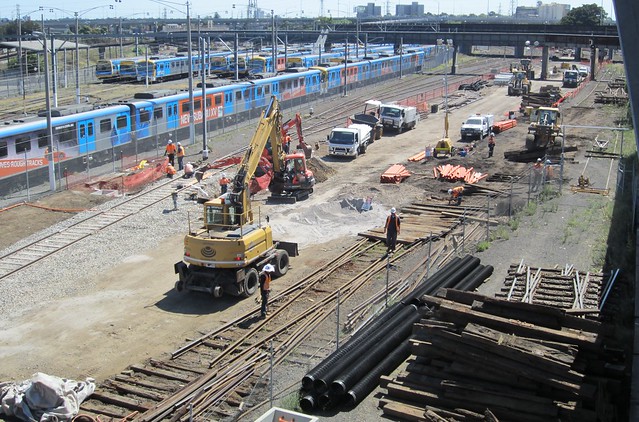 Nearby at Southern Cross, the new platforms are looking increasingly close to complete, though the track is still missing. 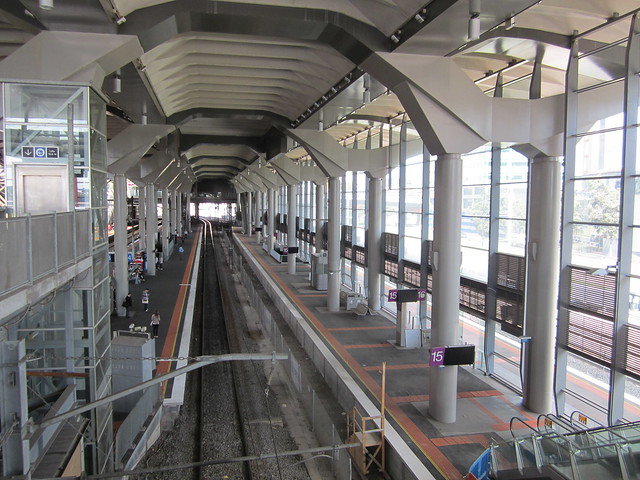 Note the glass wall. When Southern Cross was built/renovated last decade, they did include provision for the extra platforms 15+16, which is why these have taken shape so quickly. But the glass wall on the western side of the station will actually sit between these platforms.

So platform 15 will be inside, and platform 16… well, that could be a little chilly and wet on cold rainy days. 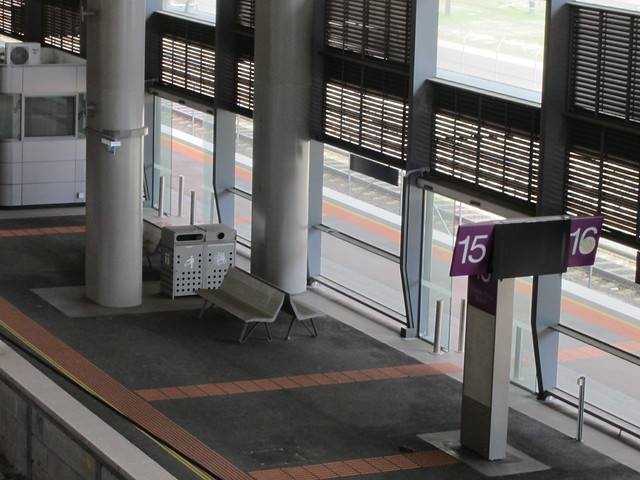 There are still questions about the overall project. There’s still little or no public information on an operating plan of any kind — which should be a prerequisite before you start building.

That is, you should work out what train services you want to run, then build the infrastructure to allow it. We still don’t know if the V/Line trains originating in Geelong will stop at the new stations in Wyndham Vale and Tarneit. We don’t know if passengers at Deer Park and Ardeer will get any extra trains stopping. We don’t know if Geelong trains will take longer on their trip, coming into Melbourne the long way around, even if the tracks they use are faster.

It seems the project wasn’t planned that carefully — despite being one of the most expensive infrastructure projects ever undertaken in Australia.

Victorian transport department secretary Jim Betts said at a conference last week that the $5 billion Regional Rail Link, which has blown out by $1 billion, was budgeted for haphazardly. ”The budget for that project was basically haggled over between the state and the Commonwealth one weekend and we end up with a number written on the back of an envelope,” he said. It was reported in the Australian Financial Review.

Hopefully that planning is going on behind the scenes. Alas, if it is, like much of the planning of our public transport network, how they’re intending to spend taxpayers’ money is being kept secret from taxpayers.

I still wonder if the same amount of money invested in improving the existing western infrastructure mightn’t have had a similar effect, but with added bonuses in other areas. I’d say “that analysis must have been done” but sometimes it really doesn’t seem like it has been.

If we look at the 2009 Report for Public Consultation (I’ve only read a few pages of it though), back when they were in the early planning stages, they seemed to have a general idea of the difference it would make:

-More capacity – It will “more than double the capacity of the regional commuter network.” 12 extra train paths per hour across Geelong, Werribee, Sydenham/Sunbury and Ballarat/Bacchus Marsh.

-3 extra Werribee services in peak hours (so 8 or 9 trains per hour total, ie a train every 6-8 minutes, which is pretty good considering this is is outer-suburban Melbourne, not a tightly packed metropolis like Tokyo or New York.) Sydenham and Cragieburn will also get improvements.

-Capacity for improvements and future electrification of Melton services (although they do say “with other planned improvements to the network”, I assume this means metro tunnel).

-Express Geelong-Melbourne services (“flagship services”, for most of the way they will go at 160 km/h and they won’t get stuck anywhere so they should be a bit faster than the current services, otherwise they wouldn’t call them flagship)

-Short-starter services starting at Wyndham Vale (I assume they’d also stop at Deer Park and Ardeer. They won’t block the express trains because there will be passing tracks. There will be stabling built for trains in Wyndham Vale, five eight-carriage trains. Another benefit of RRL – longer trains.)

-Space to build two electrified tracks for the suburban trains (building this is inevitable, especially considering the huge population growth – by the time RRL is complete, Wyndham will be 223,323, almost double the population in 2006, and 334,676 in 2031. Shouldn’t cost much because apparently the main cost of the project was the inner city stuff.)

-Space for extension of the Werribee line to Wyndham Vale (then the Werribee line would probably become a ‘circle line’ going all the way around, which along with the metro tunnel, paves the way for a greater restructuring of Melbourne’s rail network).

That was mostly knowledge from four years ago and gives some idea of the new services, and also the opportunities for expansion, which shows that they do want to plan ahead. I have to agree that we aren’t getting much information these days, but even that much gives a reasonable idea and if that isn’t enough to satisfy people then nothing new that they say is going to change anyone’s minds, and they are better off just getting on with the job.

No need to apologise Ray. Your post was comprehensive and enlightening. There appears to be the potential for much improvement. Thanks.

Massive train and tram works over the Easter weekend, no help for people who want to go out of the city.

I also found out at Metro was called that as they wanted people to refer to it as “the Metro” and use it as a noun, not that smart as *adjective* *noun* is a slippery slope.