Last week the first of the new Swanston Street tram superstops opened. On Monday I went down at lunchtime to have a look, and came across Lord Mayor Robert Doyle, City of Melbourne planner Rob Adams, and Yarra Trams’ Michel Masson all down there having a look, and talking to the media about it. 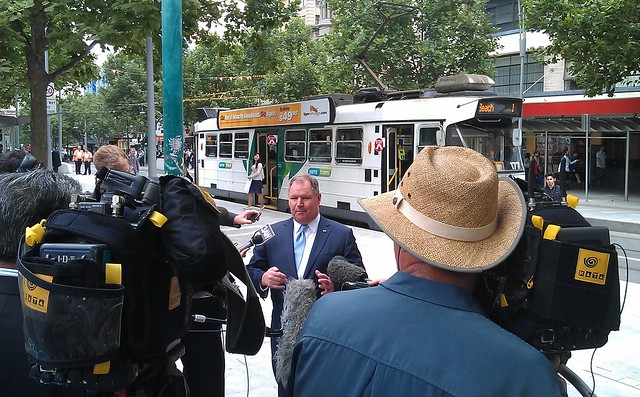 It’s good to see this space finally being rid of cars, and the priority given to the main users of Swanston Street — pedestrians, tram passengers, and cyclists. And of course it’s great to get some more accessible tram stops in the CBD — the first for Swanston Street that are actually within the Hoddle Grid. 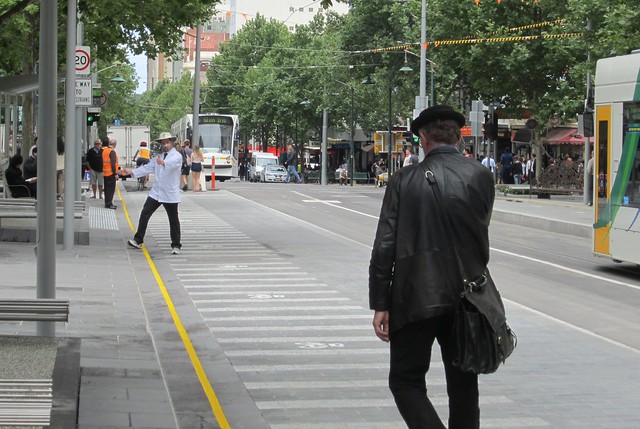 During the first couple of weeks, they’ve got people dressed as lifeguards and umpires etc using some humour to direct people to the right spots.

This is important because the space needs to deal with tram passengers, pedestrians, and cyclists. Thankfully motorists are (theoretically) out of the equation, though at one stage I observed a motorcyclist unwittingly ride in. 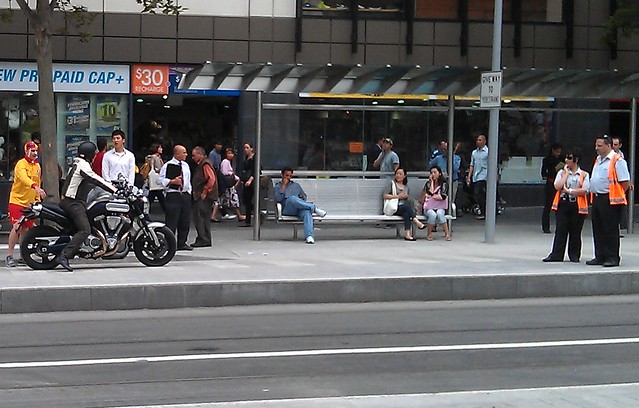 The real problems here are that (a) they’re a unique design — in fact one keen observer reckons they’re unique in the world –and (b) they’re not intuitive.

For pedestrians, it’s simply not obvious that the space where you board the trams is not where you should walk along. For cyclists it’s a little clearer where they should be, and from what I saw, they seemed to realise they needed to stop and give way to passengers getting on and off trams.

I haven’t been there at the relevant times, but I’m particularly curious to see what happens when large numbers of tram users getting on and off (such as during the University peaks) intersect with large numbers of cyclists. 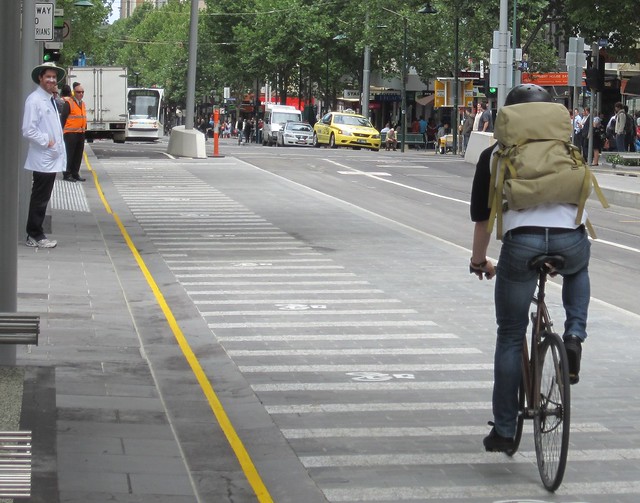 Even after adding small “bicycle” markings onto the bike lane, pedestrians and passengers seem confused. Maybe they’ll learn, but it will take some getting used to — something acknowledged by Masson and Doyle (and Adams I assume). I’d expect some further tweaking, but I doubt there’ll be any major re-design any time soon.

Like anything else, it requires the critical mass of people to know how to use them, and then (most) visitors will hopefully just follow everybody else. Whether this will happen, only time will tell.

And in the mean time, work will begin on the next two stops, further south.

11 replies on “The new Swanston Street superstops – do they work?”

I think it is working well. The initial chaos of people wandering everywhere seems to have sorted itself with line marking and symbols. The intersection of Little Lonsdale Street heading north has now been given some treatment and new signals, although not activated yet.

It looks like they should have used a coloured pavement surface to make the bike lanes clearly different from the pedestrian paths. The two slightly different shades of grey are no good as a visual cue and simply look like decoration. They certainly won’t work well in wet weather.

A coloured lane (i.e. green), consistent with those used elsewhere in the city (and the world), would have gone a long way to eliminating accidental pedestrian use of the bike lanes.

According to one CoM staffer, they didn’t find any tram stops elsewhere in the world on this design. Is it another case of Melbourne ignoring best practice (e.g. Myki, bike lanes) and making our own costly mistakes? As you say, only time will tell.

But the big driver of this design is the sheer volume of passengers. I believe this is the busiest tram street in the world, and any platform stop with a fence around it would be too small, making it hard for passengers to move to their tram – remember there can be 2 or 3 trams at the stop at any moment.

At Melbourne Bicycle Users Group, it wasn’t our preferred option but we think it should be given the best possible chance to work.

Wouldn’t it be nice to sea peace break out between cyclists and pedestrians? Then we can take on the cars, united.

Agree the bike lane should have had a colour – even if only in front of the tram stop proper. At least that would be a relatively cheap retrofit, if it ends up being needed.
@Nik, I suspect we’re not ignoring best practice – I think we are leading it. None of the other tram networks I’ve seen are as far ahead as Melbourne in deploying accessible tram stops over the entire network. Maybe we’re making our own costly mistakes but I’d say it’s preferable to trial a range of measures and see what works, than spend millions deploying a design(s) across the whole network that we then have to go back and fix.

Personally I think the biggest mistake is putting the bike lanes between the stops and the trams themselves. If I’d been drawing up the plans I would have looked to put a two way bike lane on one side of Swanston Street, separated it from the general pedestrian thoroughfare with a small piece of raised concrete or simple low elegant single chain fence.

Alternatively I would have simply removed all markings for bikes and treated it the same way that Southbank is, with bikes mingling freely with pedestrians. That would force bikes to slow down.

Forgive me for adding a comment utterly irrelevant to your (always) informative post, but it’s a weird thrill to see someone you know in a photo – the gent with his back to the camera in photo two is Bob, a fellow Flemington Litter Ninja, class of 2010!

Personal observations have indicated that those big dividers at the head and end of the tram stop mimic some of the dividers designed to funnel passengers. People jumping off a tram or dashing across the street are using the bicycle lanes as a more direct path to their destination instead of jumping up on the footpath only to jump back down again. So in my mind the design so far hasn’t proved particularly intuitive. It doesn’t accommodate laziness!

Snow bound Kath in Geneva is seeing someone she knows in Melbourne. I can only shake my head in wonderment at the internet at times.

As a cyclist [1] I see this as being the perfect example of poor problem definition, and effort and money being put into solving the wrong problem.

Purely from a cycling perspective, the changes to Swanston St are trying to address a low frequency high impact event (car vs bike), whilst ignoring (and in fact increasing the likelihood of) a high frequency low impact event (pedestrian vs bike)[3]. I wonder if this means the initiative is less successful from a PT perspective as well? (I’m a 96 kind of guy, so don’t use the north end of Swanston St on tram)

I tried using Swanston St northbound on Monday and got cleaned up by a pedestrian running for a tram: eyes only for a tram, running across the “footpath”. Fortunately neither she nor I were hurt, but really…

The biggest culprit here is Bicycle Victoria (and I speak as a BV member of 17 years). Their insurance and member support is second to none, but their cycling advocacy sucks. They seem to be aiming for this utopic world where 100% of the population both cycles and wants to cycle. Anyone who doesn’t want t cycle is weird, and to be treated with suspicion bordering on derision. Just look at the mess BV made of Canning/Pigdon intersection (google it if you want the horrible details),

[1] I don’t wear lycra, I don’t shave my legs, I don’t attempt to make my commute in world record time, and I have a belief that as a road user [2] I need to follow the road rules, such as stop at a red light.
[2] I’m also a driver, a PT user, and a pedestrian
[3] Personal statistics in 17 years of commuter cycling: 2 car interactions, over 2 dozen pedestrian interactions. And yeah, I know my personal experiences are not worth a damn statistically :)

I should also point out that my low-high frequency-impact taxonomy is applicable to the CBD +~5km radius. The whole thing varies once you get out into the white bread belt…

[…] Bowen wrote a piece about the new tram super stop shortly after it opened last month. If Clover gets her way, Swanston Street would give us a good […]