Sometimes when the media or politicians want to highlight what they see as massive government waste (particularly in the transport arena, but also in other areas), they compare it to how many extra trains could have been bought instead.

While it may seem a little myopic, I think overall it’s a good thing. It’s a sign that public transport is at the forefront of what’s seen as important for the state government to invest in (even if, as we know, there’s a lot to PT beyond trains). 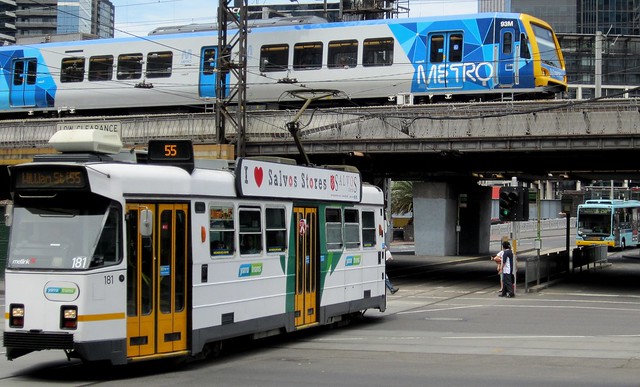 For some time I’ve struggled to find a good reliable solid figure on just how much a train costs, because often the figures for new trains have associated infrastructure such as power upgrades (you need more juice to run more trains) and stabling (you’ve got to store them somewhere) included.

Thanks to the Auditor-General’s report into the state’s finances (page 38) we now have a figure: it’s about $15 million per six-carriage train. (Happily, that’s what I’ve been guessing when asked.)

The same document also has a price on the new trams: $272 million for 50, or about $5 million per tram. … Given these trams will have the capacity of about a quarter of a train, at first glance it appears that the cost is higher per passenger than a train, though the contract in this case includes design, whereas the trains are an existing more-or-less off-the-shelf design.

Of course, this type of thinking entirely about fleet size ignores that a lot more could be done with the fleet we already have, particularly getting more services running more often outside peak hours, when waiting times are generally long, and crowding is sometimes almost as bad as peak hour. (And of course funding is needed to use any extras you add to the fleet.)

Oh, and… how much does a bus cost?

(The pic — yes, I went back to Flinders & Market Sts and got a better shot.)

“The overall figures quoted above are significant. They represent many foregone hospital beds, trains, teachers, police and child protection workers.”

4 replies on “How much does a train cost?”

Unfortunately it’s not just about how many trains/trams the network has, it’s how many it can handle. For the trains, level crossings, warped track & poor design of the loop/network mean we’re stuck with a finite number of trains. Until the state government is prepared to shell out the millions required to remove ALL level crossings, repair the track & change the loop traffic things will not change.

Trams designed for Melbourne! It has been a while since we had any of those. Nice photo, except I would have liked a white bus.

Buses are less than $500,000 each and therefore quite popular with bean counters. Of course, no politician of any colour has yet seen fit to add one (yes, one) to the route I could use to travel to and from the station in the morning. So I have to drive.

“particularly getting more services running more often outside peak hours, when waiting times are generally long, and crowding is sometimes almost as bad as peak hour.”