Some reasons why the Rod Eddington-proposed east-west road tunnel makes no sense:

1. Eddington’s own study showed the road tunnel would have a benefit/cost ratio of just 45 cents in the dollar.

2. Even including the rather wobbly “wider economic benefits” only got it up to 72 cents. (Only by lumping in other projects including the rail tunnel with the road tunnel were they able to get a result that was anywhere near economically viable.)

In short, anybody with any hint of economic rationalism in them should reject the road tunnel as unviable. 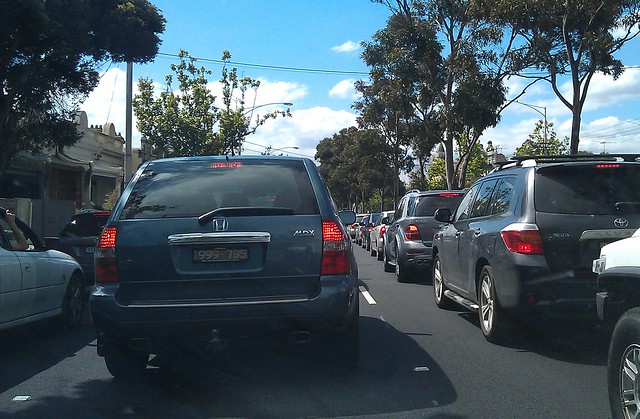 3. People seem to think it’s just a problem with cars coming from the big road (Eastern Freeway) onto the little one (Elliot Avenue/Macarthur Rd, through Parkville), as if all the cars are headed from freeway to freeway. They’re not of course.

The photo above shows Alexandra Parade eastbound on a Saturday. Those three clogged lanes of traffic didn’t come from the one lane through Parkville. Eddington’s tunnel wouldn’t fix this, because under his plan, it wouldn’t have interchanges anywhere near there:

there are sound operational, functional and strategic reasons for this section to act as a northern city bypass, and city access ramps have not been included. — Chapter 9

And if it was modified so it did have interchanges, it would devastate large areas of Melbourne’s prime inner-northern suburbs, due to the massive amounts of land required.

4. And the westbound traffic? The Northern Central City Corridor Study showed that most traffic from the Eastern Freeway is heading to the city and inner suburbs, only about 10% heads across town to the Tullamarine Freeway/Citylink or further west. (See below)

5. You don’t fix traffic by building road capacity. It doesn’t work. It never works, due to induced traffic: once increased road capacity makes it easier to drive, people do so, by making more trips or moving trips from other modes.

6. The claims of a “backup to the Westgate bridge” don’t stand up. Footscray Road, Dynon Road and Smithfield Road together provide six lanes each way across the Maribyrnong River (one more lane each way than the Westgate). They don’t work as a backup because they have their own traffic to deal with. It would be the same with a new tunnel.

It could only ever work as a “backup” if it is kept closed and unused until the Westgate is blocked. Which is not the way multi-billion-dollar pieces of infrastructure are generally used.

7. One reason Eddington’s study wanted more roads was that it assumed public transport use would not grow strongly:

In 2031, the daily number of public transport passenger trips is predicted to be around 1.4 million

In reality, it reached that level in 2010. The last thing you’d want to do is undermine that by mass building of new road capacity that would encourage people back into cars.

“5. You don’t fix traffic by building road capacity. It doesn’t work. It never works, due to induced traffic: once increased road capacity makes it easier to drive, people do so, by making more trips or moving trips from other modes.

I have to say that this is one of the most logical paragraphs I have encountered in my entire life.

I can’t remember who said it, but I always liked the quote “solving traffic problems by increasing road capacity is like solving obesity by loosening your belt”.

I’m looking forward to the proposal to widen the east-west road tunnel when it gets jammed up with traffic. Just start out with twelve lanes, don’t incrementally go there! That way the traffic chaos will only be for one construction job, not four.

Is there a proposal to rip up the existing roads along that route and replace them with tram/train tracks, a bicycle path, walking track or parks? Didn’t think so.

Oh, see pg 129 of Investing in Transport: Main report ( http://www.transport.vic.gov.au/__data/assets/pdf_file/0015/34251/Investing_in_Transport_East_West-Chapter05.pdf ) – methinks they’ve been reading the PTUA website. They say that the traffic flow diagrams you’ve used are wrong, wrong, wrong because the roads can only carry the traffic they deliver – if only they were wider, there’d be more traffic – thus justifying the tunnel. They also note that building Eastlink ought to shove an extra 10% of traffic onto the Eastern (something to the effect of “we built this new road causing more traffic, so to deal with that we ought to build a new road to solve the problem once and for all”) – I wonder what the real figures are? Anyways, they reckon that it’s not ~9% of traffic heading for the Tulla/Bolte, more like ~6% so we definitely need that east-west tunnel. Or is it ~24%? Depends which diagram you pick.

Re point 1: does anyone have a specific page reference for the 45c BCR? I’ve heard it countless times but never seen the source.

Re point 4: Eddington says at p 129 that it’s a myth that nearly all of the Eastern Freeway traffic is destined for the inner city. He says it’s a misinterpretation of the NCCC study. He says his study “revealed that around 40 per cent of the daily traffic from the freeway travels beyond the central city area – to the south and the west (See Figure 71). That is the case with the current network: in the future, EastLink will add a new dimension”.

@Alan, from memory the 45 cents BCR wasn’t spelt out, but was derived from taking the road tunnel plus rail tunnel BCR, and taking out the rail tunnel BCR (which is spelt out somewhere).

Unfortunately it looks like the technical documents that accompanied the Eddington report are no longer on the DOT web site, though some or all of them may be available here.

Eddington should be sent packing. He was a director of a company which collapsed leaving a $3 billion dollar black hole with multiple regulatory deficiencies which have never been properly dealt with.
I find it hard to understand why he has any credibility at all.

Now if your blue and red snakes were taken at face value, Elliott St would be a tiny little road with hardly any cars on it. But it isn’t.

Its a rather tricky picture to draw…..

Obviously a significant proportion of the traffic in Hoddle St is headed south (Richmond and the inner-south eastern suburbs) rather than the CBD and surrounding area (like St Kilda Rd) but an east-west tunnel is unlikely to help that because it would not be in the direction useful to them.

It would be useful if those diagrams had divided up the 37% and 34% shares for Hoddle St further into Victoria Parade, Albert St, Wellington Parade and further south.

The traffic to/from further south would be a major reason behind that grade separation plan that the previous government were moving towards.

An east-west tunnel could (if there were west-facing ramps at Hoddle St) draw some new traffic to Hoddle St that previously travelled on the M1 because of its new capacity while not moving that much (in Hoddle St terms but stll quite a lot on those other Streets terms) of the Hoddle St-City traffic to streets further west.