The move to Carnegie in 2003 gave me two local stations, because the house was almost equidistant between them. It was slightly closer to Murrumbeena, so I usually used that. But Carnegie had better access to shops, so that got used sometimes too.

I’ve mentioned Murrumbeena already. Carnegie hasn’t changed much recently, but the surrounding area has, with the new library being built — and opening just after we’d moved away. D’oh. On the corner of Dandenong Road, a multi-level shopping centre rose from the (figurative) ashes of the old Betta Electrical/Billy Guyatts that was once there.

I still sometimes go back to Carnegie. There’s a great pizza shop (“Herbs”) on the corner of Neerim and Koornang Roads. 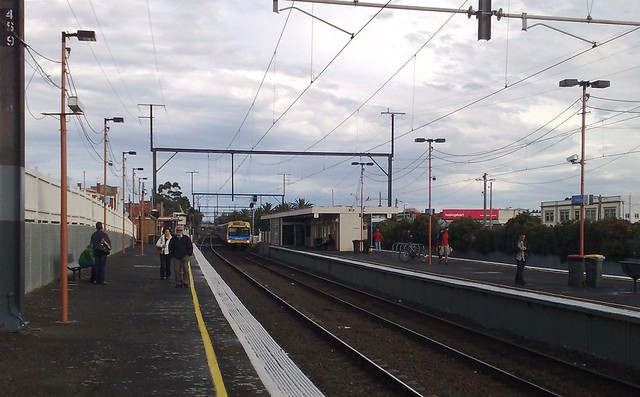 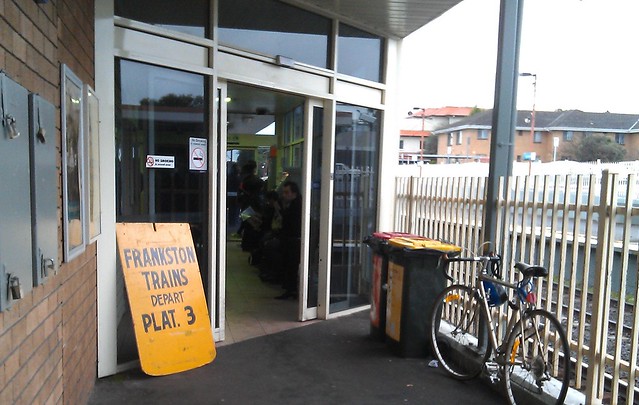 My final regular is Bentleigh.

Since I moved here, it’s had upgrades to the level crossing (but not actual grade separation), and parts of the local Smartbus 703 route have been added into zone 1, which I think has added to the number of people using it. It’d be nice if this was all done in the name of removing zone anomalies, but in fact it appears the motivation was the Myki system, which needs stop zoning to be consistent between all the routes using an individual stop — so parts of the 703 had to be added to zone 1 to fit in with other routes around Brighton and East Bentleigh. No matter, at least it got done.

In the station itself, which isn’t exactly beautiful no matter how clean it is, there’s an ongoing battle of wills between Metro and local vandals, with the gents’ toilet door receiving many coats of paint in the past 12 months or so. Given the graffiti that decorates the ex-State Bank/Telstra store down the street, it’s fair to say there’s a local graffiti problem.

It’s interesting how myki’s workings provide cheaper fares than you would expect. For example, my zone 1 pass allows me to travel to Monash University from Brighton or Bentleigh on the 703. Even if I touch on and off correctly, I still won’t be charged for zone 2.
Personally, I think it is fair because there isn’t really much difference between catching a 703 or catching a 630 + connecting train/tram.

@Terry, expect that to change when Metcard gets switched off. It’s due to Myki equipment not knowing which bus route it’s on; all it sees is a trip from the zone 1/2 overlap to elsewhere in the overlap; it doesn’t know part of the route is zone 2-only.

I knew that, but due to a massive oversight, I forgot to mention it.

As we know, the shut off is at the end of 2012, which gives myki users plenty of time to enjoy cheaper fares in certain scenarios.

Also exploitable is route 822 to travel from Southland to Chadstone which ordinarily requires zone 1+2.

The zone 1+2 requirement (and hence the price) on the 822 is hardly fair in my opinion when the exact same trip can be done on a zone 2 ticket with the 767. Full fare passengers pay $2.08 extra for the privilege of travelling through Murrumbeena.

Thanks Daniel, enjoyed reading it.