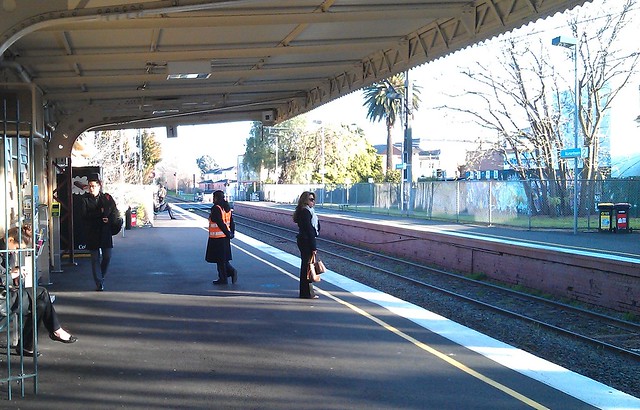 We moved into a flat just across the street from the Dandenong line. The noise isn’t noticeable after a week or two, apart from missing dialogue on the television when a freight train goes past.

It was a short stroll (if one took the short-cut along the train line) to Murrumbeena station. By year 11 I’d regularly meet school mates in the back of the 7:40am stopper from Oakleigh to South Yarra. When I moved to university (at Caulfield, then called Chisholm Institute of Technology, but soon to become Monash University’s Caulfield Campus) it was a quick two-station trip.

The station has barely changed at all. The staff member who used to be behind glass in the booking office is now out on the platform, but outside morning peak hours there’s nobody there at all. 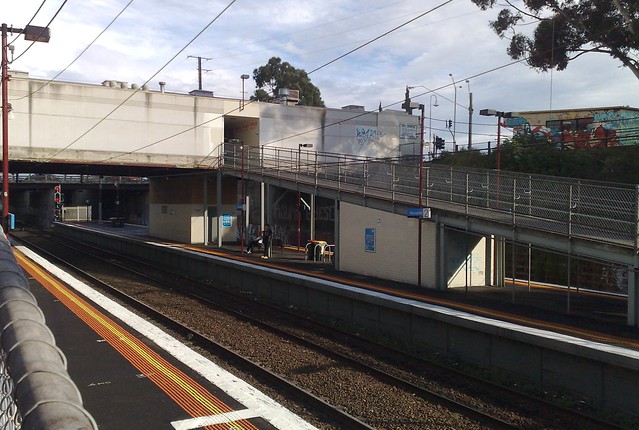 We moved to Hampton, but it was actually slightly closer to Moorabbin station, which I used for getting to/from the city, and to university at Caulfield. I think I timed the walk to the station at 12 minutes if going at speed, and looking for a gap in the traffic on the Nepean Highway, rather than having to wait for the lights. Not sure that’d be a good idea these days; I’m sure the traffic is heavier.

At times one could catch an express train from Moorabbin to Caulfield or vice versa. A good quick trip, but it seemed slightly unjust to be paying a two-zone fare for the privilege.

If one didn’t want to walk home, there were buses back towards home, until 1992 when services were slashed from roughly every 15-20 minutes to only every half-hour, effectively killing them as a useable rail feeder service. (This was done by Labor, pre-Kennett, as a money-saving measure.)

Moorabbin station hasn’t changed much over the years — it’s still ugly — though after I moved away, the station building burnt down and was replaced by something that to my mind is about the same — at least, it’s the same shape, perhaps it’s a different version of dull civic building style/colour. Curiously, the Metcard validators are at the top of the ramps, but the Myki readers are at the bottom.

Hampton station was my other regular, because I’d had the job in Elsternwick at Hattams for some years, and would catch the bus to Hampton then the train to Elsternwick to work there — on Saturday mornings, on Fridays once I started university (where generally it was possible to organise your timetable to have a 4-day week) and also during the holidays.

By 1993 I was in the workforce, and for a while was working in Burwood East/Box Hill South, and the commute was a bit of a killer, involving a walk to Moorabbin, a train to Richmond, then either a train to Box Hill and a bus to work, or a train to Burwood and a tram to work. I did get a fair bit of reading done though, and on the way home often had my mate Brian’s company, as he worked at the same place.