I’d heard ages ago that there was a Samsung ABC iView app in the works. It’s now out, but some kind of screw-up means it’s visible to newer (2011) Samsung television owners, but not owners of last year’s models.

Thanks to wiser people than me on the ABC iView forums, here’s how you do it, by changing the TV’s country and thus getting it to re-install the default apps:

(Note: take care here; this is at your own risk. As noted in the comments, MitH had problems with this after misreading the instructions. If things go wrong, you may need to contact Samsung support.)

2. Press Fast-Forward, 2, 8, 9, Rewind. Leave about half-a-second between each button press and it should go to a menu that allows you to choose the country.

3. Choose something other than Australia. Go through the terms and conditions and wait for it to install the default apps for that country.

4. Do steps 2 and 3 again but this time choose Australia.

You should find the ABC iView app has appeared. 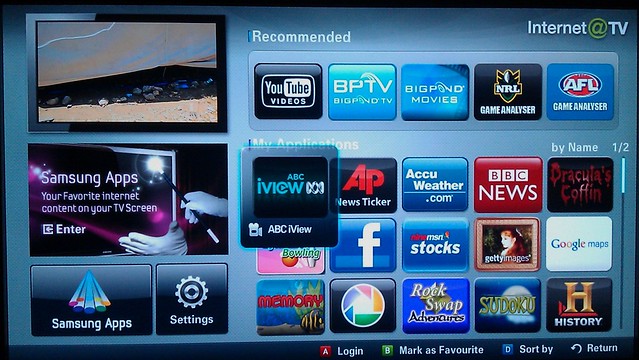 Yes, it’d be nice if it just appeared automagically on its own. Perhaps Samsung just aren’t publicising it yet, getting ready for some big launch.

I’ve played around with it, and it looks excellent. The navigation is never going to be as easy as via a computer, and unfortunately it’s not on iiNet’s free zone, but it’s much nicer to be able to watch programmes on the couch than sitting by the computer.

There’s only one puzzling thing: why do the [email protected] apps (any of them) occasionally refuse to start, citing “Network interference”?

It’s not wireless interference, as I’ve got a LAN cable plugged into the back of my TV. It doesn’t seem to kick-in when there’s particularly high usage of our internet connection.

Just one of those mysteries; something I’ll investigate further as I get time.

I bought a 3 meter HDMI cable so I can now plug my laptop (sitting on coffee table) into my tv and watch iview unmetered (extend computer desktop onto tv). No noticeable difference in quality compared to Sony native Internet TV but slight hassle to set up. Cheap cables available on eBay.

hi
glad you are still loving the samsung

my series 6 (LA32B650) has now got issues because i misread your guide
i did changes to the menu/language and now had a dicky remote
samsung support have been great at getting me back to where i was, maybe, still waiting an hour w power unplugged for a reset (doubtful but will see)

whilst talking to sammy im lead to believe the updates to samsung apps is only for later models (not inc mine :( )

luckily i bought a d6500 bluray for other tv, with all that and more :)

try out allshare, its brilliant
also try the android remote for the tv/bd too :)

Thanks for alerting us to this – we now have iView on our Samsung. A little while ago we installed an update for the TV and the process wiped our wireless network password as well as all our usernames and passwords for the Samsung apps – Facebook, Picasa, YouTube, etc. Not a problem on a computer but so slooooww when trying to enter them via a TV remote. We blogged about it (http://www.cheltenhamhome.com/2011/07/tv-settings-wiped-when-installing.html).

There’s a note in the corner of iView that our model TV can’t access the unmetered downloads of some ISP’s. There’s a link to the iView webpage which we haven’t visited yet to find out why.

Thanks for the hint re iView.

On a Samung series 7 from 2010, I just needed to go to [email protected], bring up the list of available apps (Samsung Apps), and iView was in the video section. Tell it to install and all was well. A system software upgrade on the display may also help.

If you have an iPod or iPhone, get the Samsung Remote App from the Apple app store. This is particularly useful if you want to enter text, or if you want to turn off the TV from the other end of the house while the kids are watching it.