The trilogy of disasters: earthquake, tsunami and nuclear emergency, bringing untold misery and tragedy to the people of Japan — and what does ACA do? They use a caption which makes it sound like it’s a scene from a musical. 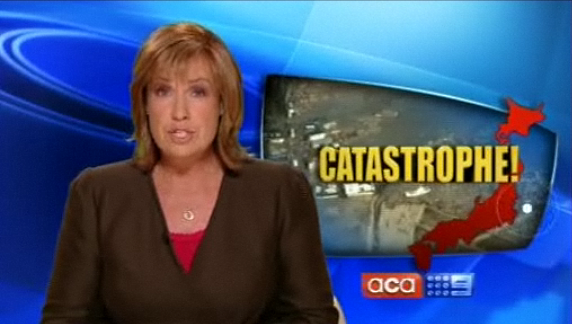 It was clear from the time the first videos were shown on Friday afternoon that this was serious. And perhaps the fact that it’s happened in a technologically advanced country (as well as one with relatively close ties to Australia) makes the impact all the more powerful — with saturation media coverage not seen for some other recent disasters. (Cyclone Nargis, anybody?)

I suppose it’s the nuclear aspect that has really focussed people’s attention. We’re a long way away, but it’s scary stuff — and it’s unclear what will happen next.

One can only hope they bring it under control as quickly as possible so the recovery and rebuilding can proceed quickly.

I guess nothing ACA does surprises anyone these days. They seem to compete with Today tonight for the lowest take on anything.

I’ve seen commercial television shop around for the “experts” who will give the most dramatic appraisal of the current nuclear incidents. They know that fear = ratings so the more they can exaggerate the situation the better.

On the other end there’s Andrew Bolt who hates the greens and will play down any danger (see climate change) and advocates that Chernobyl was not a big issue and only a few ppl were affected.

The media loves disasters and I’m sure can’t wait for the next one.

I used to live in Sendai until employment put me in Niigata. My wife, family, and friends continue to stay on in Sendai. The downtown area is relatively unaffected – my wife now has all utilities at her place, right behind the (now non-functional) station. She reports to me that food is available and stores – including some restaurants – are open.

As for the reactor problems, those are ongoing and are causing *some* people to make hasty decisions – panic buy or take the first flight out of Japan.

My wife has the typical ‘gambatte’ mentality – the need to group together and battle with your group (family, friends, company) against the common threat. I have encouraged her to come over to my (relatively safer) pat of the country, but her duty to others keep her in Sendai AND going to work.

By the way, Niigata is another prefecture of Japan.

This situation brings back memories of the Three Mile Island disaster. I was 11 years old and living in Reading, Pennsylvania in 1979 when this happened. Many people living in the towns around the plant were evacuated and had the situation become more severe we too might have had to evacuate.

Jeez, TIJ, that can’t be easy. And I guess only possible to judge as a good or bad decision in hindsight. Thoughts are with you all.

It’s not just ACA- it seems ALL media outlets, even those considered conservative, are hyping the nuclear disaster to extremes. No doubt, this is a terrible accident, and one which is being dealt with by experts in a highly professional manner. The best explanation- when a nuclear reactor is shut down in an emergency, the control rods (the material which controls the rate of reaction) are inserted fully in place, thus ceasing further chain reactions. Having done that, the reactor core will be still VERY hot, and thus coolant is needed (usually ‘heavy water’, which is D2O- D is deuterium, a heavier isotope of hydrogen) to bring the temperature down. That reactor is 40 years old, and thus the coolant had to be pumped into the core from a nearby location (new generation reactors store their coolant above the core, and thus can gravity feed coolant as required in an emergency). The primary pump system was damaged in the earthquake, the secondary damaged in the tsunami. Therefore, as the temperature was still too hot, the fuel rods start to melt into a huge mass. Remember, the problem now is cooling the core, and the attempts to do so require steam and vapour to be released, so as not to build up pressure in the concrete encasing, which is ultimately what will contain the core. In the releasing of steam and vapour, radiation will be released into the atmosphere. Now, the radiation will dissipate, but the concern is there of how much radiation. We are bombarded by cosmic radiation on a daily basis, it is essential for life, so some radiation can be absorbed by the human body and not be harmful. But there is still the danger of excess doses- thus the evacuations and the potassium iodine tablets. Rest assured there CANNOT be an atomic detonation- nuclear power plants only have just enough material to create a sustained chain reaction, that is what is known as ‘critical mass’. For a nuclear explosion, you need much more mass than that (supercritical mass), so that is an impossibility.

As the days go by, the hot melting core will cool, naturally and with manual assistance, and the core will be much better contained. The concrete casing should contain the core safely- that is what it is designed for. Once the core is stabilized, which it will likely be at some stage, the radiation levels will need to be monitored. Most of the isotopes have a short half-life (the time it takes for an isotope to get to half its radioactive intensity), so will be safe in a short period of time. Other isotopes may take longer, so the concern there. Having said that, compare Fukushima to another city on that same island, Hiroshima, which was devastated far more by radiation- 65 years on, it is a thriving city:
http://blogs.news.com.au/heraldsun/andrewbolt/index.php/heraldsun/comments/if_japanese_survived_hirsohima_americans_will_survive_fukushima/

Dogs Breath, I agree, it upsets me that many of the “experts” have not been nuclear experts at all- Nine has been showing Professor Tilman Huff, an infectious disease expert, and touting him as an expert. He is a known anti-nuclear advocate- he may be an expert on the effects of radiation on the human body, but he is in no way qualified to discuss the happenings of the reactor meltdown. He also has an agenda to marginalize nuclear power, a source of energy I believe this country should consider, as it would provide us an abundance of affordable CO2 free energy. Of course, we should never ignore the risks- we should ensure standards are set to withstand such dangers, and in most cases, they have been. Indeed, modern reactors have much better safety protocols than the 40 year old Fukushima plant. I know most people on this blog likely oppose nuclear power- having studied physics at a tertiary level, I understand the technology a fair bit, and hope we look at this through open, rational eyes.

On another note, our thoughts and prayers should go to the Japanese people- honourable and stoic as anyone could be. Their character WILL get them through these dark days, and will be a model for us all in future emergencies!

PWR and BWR reactors which is 95% of the reactors in the world, don’t use heavy water.

“Rest assured there CANNOT be an atomic detonation- nuclear power plants only have just enough material to create a sustained chain reaction, that is what is known as ‘critical mass’. For a nuclear explosion, you need much more mass than that (supercritical mass), so that is an impossibility. ”

Epic fail, Andrew. Critical mass varies depending on what fissile material you use, its about 20 kilos. Which has to be in a compressed contiguous space for an explosion. Power generating reactor has a total of 2-3 tonnes of fissile material, but it is distributed through the core in the fuel rods occupying a space of 10-20 cubic metres sparsely. Power reactor has 100x enough fuel to create an explosion.

Even if it all melts and pools in the bottom of the reactor, anytime the chain reaction becomes too energetic, the mass of material gets partly blown apart and the explosion does not happen.

Thats why, in a fissile weapon, the actually difficult part of making it work, it to implode or otherwise ram together two masses to create the critical mass which will stay in one piece long enough for the real explosion to take place.

@shell – thanks. I was in Europe during Chernobyl and am old enough to remember 3 Mile Island and walked anti-nuke protests in Australia as a uni student. Oh well…

enno, thanks for correcting me- I admit it has been quite a while since I learned about that. I admit I’m drawing off my memory from years ago- not ideal for a conversation!

I am not sure how many people realise that Insurance companies will not cover policies for incidents involving Nuclear accidents with damage or destruction caused by Radiation. It is there in the Policy in clear English!!!
This could mean that anyone in the exclusion zone around a damaged Nuclear plant could find their Insurance policy will not be paid out.

A sad but true situation to be faced with, if any policy holder has this happen then there should be a national call for action to be taken against these Companies to fall into line and practise some common human decency.