PTUA Commuter Club Yearly plus membership: Z1 = $1090 (order by end of Feb; payment must clear by March 3rd). Will go up about 3% after that.

From what I’ve seen the new gates at Parliament and Melbourne Central work well most of the time, but when I went past, one was out of service (with a red light) and another was being problematic.

And at the end of the video you’ll see two fare evaders follow a lady through. There were no staff watching, so they appeared to get away with it. 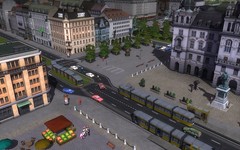 Quite slow even on my recentish PC.

Very nice graphics. A few options to adjust settings, but nothing seems to really speed it up. Demo works on my PC’s 256Mb video card despite the system requirements claiming it needs 512Mb.

Clearly a lot of scope in the simulator for playing with different options, setting up routes etc.

Just a teensy bit clunky in some ways, eg having to lay dual tram track everywhere, and having to end all (tram/bus) routes in a loop.

Can’t see a way to create bus/tram lanes. My buses kept getting stuck in bad traffic.

Not totally convinced it’s a big leap forward over the old Traffic Giant game, but it’s only $20 to buy (online; don’t know about retail), and obviously is still under development, with an active user community/forum.

A bit of fun for any transit geek. Provided I can verify the full game will run on my PC, I’ll buy it.

(Some demo download sites require signup/membership — this one doesn’t)

I have tried these new myki gates and I had no problems. The seem to open more slowly and smoothly than the old metcard gates. At the last second or so of the video it looks like a dog has evaded the fare too. I often see leashed dogs riding on the trains and trams with their owners. Sometimes they get comfortable on a seat just like a person would. Is this frowned upon by Metro or are dogs and other pets normally welcome on public transport? I don’t mind at all sharing a ride with a dog. What are your thoughts about this?

In short yes, they are allowed, under certain conditions

1) I catch early bird so only spend $2.94 getting home each night. I guess that means I can only “beat the price rise” if I buy lots of 10 X 2hr Metcards and stop using Myki on my trip home?
2) About half the time I walk thru Myki barriers at parliament, after the correct touch-off beep, it lets out a loud squeal. Of course I’ve mentioned this to Myki helpers and Metro staff who give me a look of “so what do you expect me to do about it?” I’ve heard this squeal when others have walked thru. How can we improve the system (ie fix this error) when the staff couldn’t give a stuff?
3) “There were no staff watching, so they appeared to get away with it.”
Apart from Authorised Officers, I’ve NEVER seem an attendant make any attempt to stop, catch or report someone for jumping barriers or following people thru the barriers at Parliament or Melb Central.

Jagger, my experience with Myki-only gates at Parliament is they are QUICKER than the combo gate for Myki-users. And they are less crowded than the other gates.

They are, however, not quite as fast as I think they should be.

They are also silent, which in contrast to the Metcard gates I think makes them *seem* slower. Be interesting to do a timing test on both of them.

I didn’t think the tutorial of CiM gave enough of a taste – there doesn’t seem to be any doing your own thing, it’s all walking through the tutorial…

@vaughan, I agree, though there is nothing making you follow every step of the tutorial, eg you can do your own thing for a bit (perhaps an unlimited time?) before going to the next step/clicking the tutorial icon for the next bit.

@Daniel, vaughan, not an unlimited time… I started ignoring the tutorial steps on the second play through… you get about an hour (or maybe it’s a certain number of stations) before the game reminds you that it is a demo and quits to the menu…

but OMG I love it! I have been a fan of TTD/OpenTTD for some time, but always lamented it’s shortcomings wrt public transport as opposed to freight… but here I was building triple level underground stations with tram stops outside!
[ AFAICT you cannot link the concourses, which you would think would reduce the attractiveness of transfers ;-) ]

I built a “city circle” tram loop, and the railway station became a multimodal hub with a bus line from the nortwest (detatched housing) terminating at the station, the city circle tram stopping there as well as a triple level metro going to the airport, the eastern houses/apartments and the railyard to the north…

oh, and apparently I learnt nothing from history, spending all my money on an expensive underground rail loop around the city, only to find I had no money left to actually buy any trains to run on it!

Daniel, thanks so much for pointing this gem out, I had not heard of it before today, but it looks like a bloody ripper that will provide hours of entertainment!

I’ve noticed this week, after two weeks off work, that the Myki scanners on my trip are working much, much slower than they were before my holidays. At Lilydale station they take four seconds to scan my card. On the buses it’s similar. How is this possible? Did they do a Windows update perhaps?

@Tango, yeah CIM looks pretty good, and I’m intending on buying the full version. Traffic Giant is also worth a look if you can track down a copy.

@Philip, I haven’t noticed any general slowdown, but specific devices might be having problems.