What can you say about the tragedy off Christmas Island?

A Custom Department spokeswoman this morning confirmed the death toll had risen to 30 after a fragile Indonesian fishing boat packed with up to 100 asylum seekers was smashed against the island’s jagged limestone coast.

Obviously there’s a whole sequence of events that has led to this, but the apparent desperation of the people on-board to escape from Iran and Iraq to a better life was underscored by near-consecutive items on the news ticker on ABC News Breakfast yesterday morning. 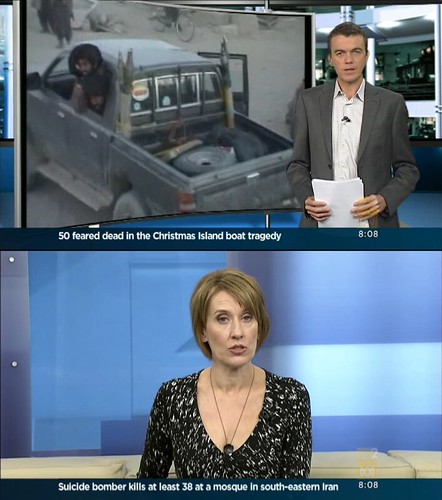 We’re pretty lucky in Australia. While some who live here do yearn to live elsewhere, few have to resort to these types of measures to try and get there.

PS. Kudos to the people of Christmas Island who did what they could to help.

What would it take to make me be willing to take a trip like this?
A lot!!!!

What would it take to make me be willing to take a trip like this with my children?
Unimaginable.

These people are so desperate they are willing to this.
And considering boat arrivals are like 3(?)% of the unlawful arrivals,
I think the Govt should do something to resolve all this.

Either send the refugee seekers back immediately or let them in.
None of this limbo shit.

Agreed cdg. I can’t even imagine being in a situation where making that trip was the best option available for me and my family.

And from another angle, Crikey had a interesting article looking at the political point-scoring off the back of this human tradgedy: