The PTUA’s Annual General Meeting was last night. There was some optimism amongst the committee and membership about where public transport is going since the change of government, but even before that, the political debate has been moving along nicely.

An example we talked about last night… 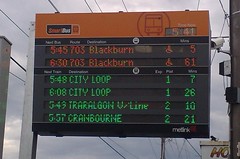 At a parliamentary hearing last year as part of the Train Services inquiry, the view that buses don’t connect properly with trains was flatly denied by the government.

Mr BOWEN — You will certainly find that the buses to Daylesford still connect properly with the trains at Woodend, but if you try that in any of Melbourne’s suburbs, more likely than not you will find that there is no connection and no attempt at coordinating bus and train services.

Mr VINEY — That is not right. That is just not right.

I’m not sure what planet Mr Viney is living on. Perhaps the only train/bus connection he has ever encountered in Melbourne is one of the two that are specifically coordinated. I think the rest of us fully well know that it’s not the case elsewhere — and this is a major barrier to public transport not playing a greater role, because most suburbs will never have train lines, and most trips around greater Melbourne can’t be made on one service alone.

Assisted by the release by the government of all its timetable data, the PTUA’s study into train/bus connections proved connections are mostly poor, and got proof of the problem publicised.

A subsequent study showed that in fact, coordination largely doesn’t happen because nobody is responsible for it.

The debate shifted. It became generally accepted that services don’t connect. I knew this was the case when I heard Steve Price on MTR, a man who I’m betting probably doesn’t catch a lot of buses, mention it explicitly.

The government went from denial to excuses.

Mr Pakula was questioned about why the Government was unable to get bus and train times co-ordinated.

“It isnt simple to co-ordinate every bus with every time,” Mr Pakula said.

Who’s responsible for setting the frequencies? The government of course.

But this is progress. The first step to fixing a problem is to accept there is a problem.

And the Coalition realise it. This and other campaigning this year has helped push them into supporting a Public Transport Authority. It’s not expensive, but it has a lot of potential to improve things. Provided they get it right, it’s going to be an interesting, exciting year in public transport.

As for the AGM… there were no other nominations for President, so it looks like it’s me for another year!

And a special thanks to Vaughan Williams, who is retiring from the Committee after some twelve years hard labour, and was awarded Life Membership in recognition of this.

10 replies on “Progress in the PT debate”

I’m certainly glad I came along Daniel. It was an interesting meeting, a good bunch of people and of course a goal that I’m 100% behind!

I look forward to coming along to more meetings and getting more involved!

I have discovered with knobs on how the buses do not connect with trains.

Having moved to Belgrave recently, I now catch the 7.30am route 697 bus near our house to the station.

It invariably arrives at the station just as the 7.39am train to the city is pulling out. This results in a wait until the 7.55am train departs.

If this bus was scheduled just five minutes earlier, it would connect with the train.

I am sure the reverse applies in the evening — that the bus would be scheduled to depart one minute before a train arrives. But happily I have so far not had to experience this. My wife, who starts work later than me, drives our car to Tecoma and we get off there on the way home and use the car.

Is there anyone I can send a suggestion about looking at these bus times? The 697 uses just one bus that needs 20 minutes to make a round trip, with 30 minutes between timetabled buses, so there is ample flexibility with no extra cost to alter the timetables.

The phenomenon of buses not connecting with trains is impossible to solve unless you run both services at much higher frequencies than what we have here in Melbourne.

A bus running every 30 minutes can either deposit people just in time for a train, or leave the station just after a train, but unless it waits at the station for several minutes while a train arrives and leaves it has no option but to disappoint some of the travellers. When you add that buses in both directions on a route need to connect with trains in both directions on a line, it becomes impossible for infrequent buses to connect with infrequent trains unless the buses wait several minutes at the station. And that slows the bus journey for the people who boarded before the station and intend to get off after the station.

The only solution is to run all bus services every 10 minutes in both directions. This ensures that nobody alighting from a train has to wait more than 10 minutes for a bus. And if the trains run often enough, nobody getting off a bus has to wait too long for a train.

I understand 10 minute bus frequencies are already part of the PTUA’s vision. The next step is for the government to share that vision.

However many bus routes start at a train station and end in the suburbs, e.g. the 697, as David said, and in that case no one would be delayed by the bus sitting at the train station (it is at its terminus), and it is these that should connect. Many routes like these (which may have poor frequencies) simply turn up on a clock face timetable every hour which has no respect to trains running from the station beside it.

The bus line near me is hopeless like this too. When contacted about it, they claimed that the buses _are_ coordinated with the trains. The problem is that to make sure it connects properly they have to allow for the train being late and then all the people from the train squeezing out of the station gates and crossing the road to the bus stop. So you end up with a ten minute wait no matter what.

The biggest problem I see now is buses. As far as I can tell, there is NO adherance to timetables. If a bus is late… it’s just late. 10, 20 minutes… who knows? Could be cancelled, too. The commuter just stands there, not knowing what’s going on. With trains, there’s digital screens and pre-recorded messages informing the customer if the train is late or cancelled. With buses, all you can do is stand there and wonder if the oncoming bus is the 8:25 running ery late, or the 8:50 a minute or two early.

Do you call him Raif ?

Listed at Transporttextbook.com under advocacy groups is both the PTUA and Smart Passengers. What is the origin of SP? Are they a splinter group of the PTUA?
I have scoured some of the railforums and it seems that the relationship between the two organisations is a wee bit combative.

Smart Passengers essentially developed out of some rail enthusiasts (such as those on the Railpage forums) who weren’t particularly keen on the emphasis of PTUA’s campaigns (a not uncommon view amongst railfans) and wanted their own lobby group. There is a small amount of crossover (such as David Stosser, SP’s Vice-President, who sometimes posts here, and is also a PTUA member).

Viney’s comment at the parliamentary hearing was just gobsmacking. How can he possibly believe that? The only way it can be defended that I can possibly think of is if Viney has a ridiculously loose definition of “connecting properly”.

I reckon Viney just got out his Melway, traced some of the train lines with his finger, and noted the number of cases where a bus route crossed over them or ran close by. There you go! They “connect properly”; what are you complaining about?

The fact that some of those buses might run only once an hour or so, or might not run at all on evenings, Saturday afternoons or Sundays, seems not to have occurred to him.

Good PTUA meeting, BTW. Nice to see a large and enthusiastic turnout. I would like to have stayed longer but after two hours the small room was getting stiflingly hot.