I’m very pleased. After years of pressure, both major parties have pledged to build Southland station. The Liberals promised it last week, and yesterday the ALP came to the party. (As recently as last week, I ran into ALP’s Rob Hudson at Bentleigh station and he said he was pushing for it. At the time I’m not sure I believed anything would come of it.)

Southland was extended in the late-1990s across the highway to the railway line. It’s plainly ridiculous that such a major suburban destination should not have a railway station. While I’ve done it, Cheltenham station is too far for most people to walk (remember, they’ve had to walk to the station from home already, and the buses from the station to the centre depart from several different stops, making even their combined services unusable. 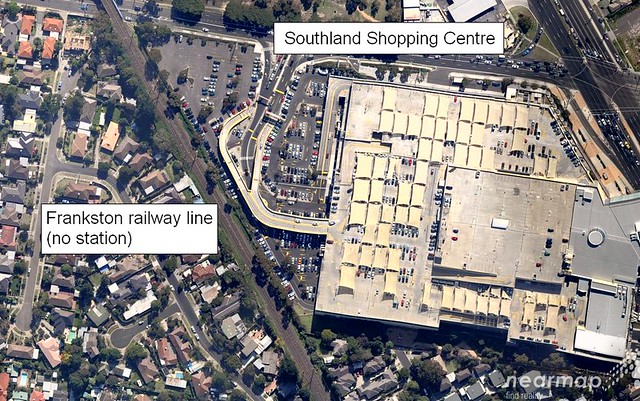 The local buses from nearby suburbs are hopeless. There are no Smartbuses; while the 600/922/923 runs reasonably frequently (due to the historical accident of it being a descendant of the Sandringham to Black Rock tram, and yes, it’s a bus route with three different numbers — ain’t it marvellous?) most of the others are hourly at weekends — the busiest shopping days. The result of course is chaos in the carparks.

So it’ll be good to see the station will finally be built.

A 2004 government study indicated the cost should be $10-14 million. The Libs pledge has come out at $13 million. Labor’s is at a whopping $45 million, which includes a full relocation of the bus interchange (some genius decided when it was built ten years ago that it shouldn’t be near a future station) — whereas the Libs’ only includes two bus bays, and presumably would have most buses either bypassing the station, or stopping briefly there on the way through. This would not necessarily be a problem, as all but one bus route connects with the Frankston line elsewhere.

And cruicially, it’s just the kind of intermediate trip generator that the Frankston line needs. These suburban destinations help a lot because there’s plenty of capacity on trains in and out of Southland at most times of day, meaning a lot more people can use PT for their trips without adding to pressure on overcrowded services.

Me? I’ll be pleased to be able to head down there without hunting for a car park or walking to and waiting ages for the bus.

11 replies on “Both sides to build Southland Station”

Yes, hooray, indeed.
I still can’t figure out how it can cost $45 m for a station.
PS Do the Democrats still exist?

I avoid driving when I can and there is a viable option, especially if there is going to be car parking hassles, so a station at Southland makes it an option for me to visit. Good YouTube clip of old trams. Unfortunately I am now lost in looking at other clips of old trams.

I believe that the preferred location is not within the aerial photograph in your post, but north of Bay Road so that land within the William Fry Reserve can be used (eg for a bus interchange). This will probably still require passengers to walk across Bay Road at the traffic signals, unless a pedestrian overpass is included, then through the Southland car park unless the increased price has allowance for additional works.

I also recall that Southland has more car parking than it is required to have, so losing some spaces for public transport related infrastructure (or temporary entertainment like the circus that sets up in its car park) isn’t necessarily a problem for it.

My comment is potentially addressed by Dave’s comment above, but the true test will be at what stage they inform the residents on (mostly) the west side of the tracks that a chunk of their property will be needed to fit the station in. Assuming of course that they would never consider moving the ramp from the rooftop parking…

I reckon underneath that shopping centre would be a spiffing place to put a metro station on a ring line connecting several suburbs, with all of its stations underneath existing rail stations.

I reckon that the southland station should replace chelthenham station or the East Malver tram can extend top Beaurmis via Chadstone Clayton Clarinda and Chelthenham terminating at the beach at Bearmis.

@Dave, have to disagree. It might make sense for the platforms to partly straddle the road and provide a pedestrian link into the park and towards the court centre on the highway, but it shouldn’t take land away from the reserve – this area needs all the greenery it can get. The bus interchange should be located adjacent to the shopping centre, since that’s where most bus passengers would be headed. Yes it would take away car-parking, but car spaces would be gained in the old bus interchange, so little net change.

Anyway, as a bus/train hub, I think they should not provide commuter parking at Southland. There’s plenty at adjacent stations (which helps support the local shops in those areas). It doesn’t make sense to allow longterm parking at Southland; my view is a time limit would be appropriate in the area close to the station.

@Brendan, I reckon there’d be space without chopping into properties, particularly if they built it as an island platform. That would involve moving track though (and perhaps the ramp), which might be contributing to Labor’s high cost. Mind you, you’d hope Westfield would be cooperating and perhaps even contributing; it can only be good for them to improve access to the centre.

Certainly it’ll be interesting to see the plans (from whoever wins the election) when they’re released.

Anything to ease the complete chaos I experienced in the car park last Saturday! All the good parking karma I have been experiencing for the last couple of years is clearly gone! G.O.R.N!

“It doesn’t make sense to allow longterm parking at Southland; my view is a time limit would be appropriate in the area close to the station.”

Where do the shop workers park ? It won’t be practical for ALL of them to come by train.

@enno: Pretty simple solution stickers for employees. Everyone else should have a time limit.

I spoke to both the Labor and Liberal candidates at the Bentleigh festival this afternoon, and a few interesting facts turned up:

Labor’s policy, for $45 million dollars, includes a deal with Westfield to overcome the risk of commuters using the Westfield carpark although I’m not sure how – the only thing I can think of is providing a bridge from the station straight into the shopping centre and bypassing the carpark, which makes sense because Rob Hudson hinted at a major redevelopment of that area being on the cards; something about “…the new development in that area.” The policy also includes building a bus interchange at the new Southland station, which may or may not involve removing the existing Southland interchange, and I suspect some changes to the signalling system to accomadate the extra minute penalty in each direction for all trains.

The Liberal policy on the other hand is far more sparse. Elizabeth Miller didn’t know much about it, but I gather that it includes two platforms, ramps, steps and some shelter on the platforms. That’s it. Oh, and the $13 million pricetag is Botchalot’s $10mil plus inflation over almost a decade.

Both plans involve full DDA access, but it’s being advertised as an optional extra (i.e. “lookie what we’re doing!!!) rather than as an absolute minimum legal requirement.