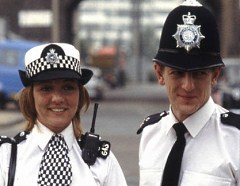 Back in the day, I was obsessed by The Bill — part of my greater obsession with British television drama. I watched it religiously from the late-80s until about 2001 or 2002 when went off the rails and into soapie land, then I abandoned it.

If those two episodes were any judge, the writing had got back to its roots: good drama with a reasonable touch of realism.

But I’m left with questions.

Maybe I’ll do some reading to satisfy my curiosity, but in any case, the last two episodes, with Meadows’ speech at the end, were a satisfying conclusion to a long-running series.

(It’s not quite over: there’s a Farewell special next Saturday night on ABC1.)

8 replies on “The final Bill”

I could have written what you’ve written there word for word!

There was an article in last week’s Green Guide about the actress who played Ackland, and her thoughts on the way the show went. Even she stopped watching after she left, but felt the writers channeled the old style for the last ep, which she enjoyed.

As a long-time Bill aficionado who stuck with it through the soapy years, I can answer your questions. A lot of them were only very recent changes in the last year or so: The theme music changed in the episode “Live by the Sword” (UK TX: July 2009). In addition, the program used incidental music during the episodes, which had not been done before except for the episode filmed in Romania.
Jack Meadows was originally a detective superintendent in the 1980s, but was demoted to DCI after an officer under his command was found to be corrupt (shades of Don Beech). When Superintendent Heaton left, Meadows was promoted to Superintendent again.
Dale Smith left the show at the same time as Bob Cryer – he had transferred to SO19, the armed response unit, and accidentally shot Cryer during a hostage crisis. While at SO19, Smith was promoted to Sergeant, and returned to the show at that rank a few years ago. When Inspector Gold left, he was promoted to Inspector.
The original cast: Cryer was shot by Smithy and retired. Ackland married Jim Carver, but he left her and the show after a gambling addiction. He returned in her last episode as a sergeant in Manchester. She married a teacher and retired. Reg Hollis was written out of the show after actor Jeff Stewart attempted suicide in his dressing room – Hollis’ departure was noted in a passing comment that he had transferred to the Royalty Protection Unit. Tony Stamp left recently to teach driving at Hendon.
The Parkview was one of several housing estates used in The Bill. The Jasmine Allen appeared recently so is still around. Some of the others are the Cockcroft, the Larkmead, and the Bronte. The Jasmine Allen and Parkview were used recently, the others haven’t appeared for ages.

I stopped watching when the show became less about police procedural and more about who could sleep with whom in the show and the argy bargy between the cast rather than the villains. It also became a ludicrously dangerous place – bombs, shootings, guaranteed every season. Ridiculous.

If I wanted to watch East Enders, I could. It wasn’t the Bill any more, so I stopped watching.

The actor who played Reg Hollis tried to commit suicide after he had been written out. That was pretty sad.

@Alex, fantastic, thanks for all the answers. One note: reading about Reg/Jeff Stewart, that says (as Andrew notes) the actor’s suicide attempt was *after* he’d been told the character would be written out. Sad.

My understanding of Reg Hollis’ demise was that Jeff Stewart was becoming hard to handle and so they wrote him out. Can’t remember which came first though, Reg being written out or Jeff’s suicide attempt. I’m sure it’s someone on the web though.

This is very challenging. We’ve been watching most of the way through the series with short breaks when we haven’t been able to get to the TV, we started in late ’86 or early ’87 and have been committed watchers ever since. How will we fill our Saturday nights now?

This BBC report specifically says Jeff Stewart attempted self-harm after being told his contract was not being renewed.
http://news.bbc.co.uk/2/hi/entertainment/7178478.stm

I watched the Bill regularly from 1992, but like Daniel I stopped watching in 2002 when it went soapie. I started watching again earlier this year when a review in the Sydney Morning Herald TV guide alerted me that it had moved away from soap back to police drama. In general its been pretty good this year.

Regarding the very last episode on Saturday night I liked the fact that the opening shot was of the feet of two officers walking down the pavement (a homage to the original title sequence) and also that the closing shot of the episode was a 3 minute long continuous shoot that started in the media room, wended its way throoughout the station to the side entrance, round the front of the building, and up to an overhead crane shot. This kind of long continuous shot was very characteristic of the Bill back around 1992 when I first started watching.