I’ve written before about peak oil, when oil production peaks and then starts to decline, getting more and more expensive. There are various predictions around the place, but many seem to agree it’s going to hit this decade.

Some argue it’s already hit, and only the Global Financial Crisis dampening demand has masked it.

What would happen if petrol prices doubled? 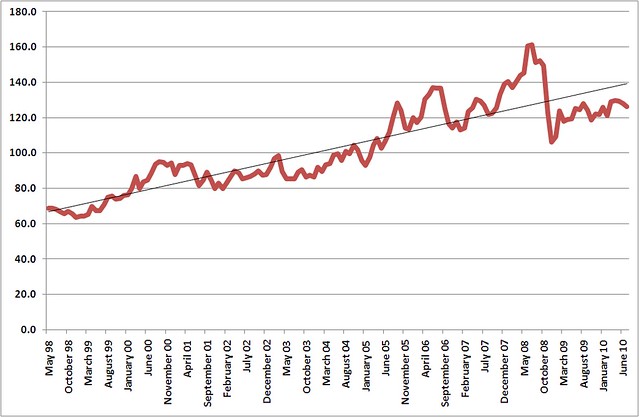 Here’s how petrol prices have looked since 1998. It’s easy to forget it, but we’re currently sitting at just on double the price back in 1998.

And as you can see, the trend line is quite definitely pointing upwards.

And that’s including the downward pressure from the removal of indexation on fuel excise in 2001.

So anyway, next time you’re thinking about buying a car, or moving house, or one of those longterm decisions that will impact how much you drive, and how much petrol you use, be sure to consider: what if petrol hits $2.50 or $3 per litre or even more in the next 5-10 years?

11 replies on “What if petrol prices doubled?”

It’s already those prices in Germany. So check out whats happening there for a precursor I guess.

When I was involved in motor sport 25 years ago, most competitors looked for ways to make engines more efficient so we could get more power and torque. This didn’t do much for fuel economy in competition, but the refinements in fuel feed, induction, exhaust and timing systems that we all would sell our souls for, and that had to be grafted onto our standard cars at great personal expense can now be had on the smallest, cheapest, most “bog standard” cars off the showroom floor.

Because when those systems are properly tuned and managed they *will* provide astonishing increases in fuel efficiency. In fact, the newest cars on the market can achieve fuel consumption figures almost twice as good as those from 20 years ago – 7 litres / 100 Km vs 25 miles / gallon (the units are mixed, I know, but I’m sure someone can standardise them).

Yeah, in a funny way I like it when petrol prices go up and it means we (family of four) save even more by only having one car. Almost all our friends have two or more cars.
Note also that gas and electricity prices have increased much faster than inflation.

I’m now very impressed that our 2040 kg XC90, with two adults and four children on board and questionable aerodynamics, can still manage 11.5 L/100 km. It would be even better if it ran on diesel instead of petrol.

The people who build engines have done marvellous work in the last 30 years.

@Noel and @Philip, yes it’s true that engines are getting more efficient, but unfortunately in the past this has been eaten up by cars getting bigger and heavier.

Yeah I have driven less than 4k in the past 2 years.

Interesting that you’d choose to focus on every day consumers? What about bus companies, what would it mean for them? Is it time to electrify buses in inner city areas like overseas?

In Taiwan I’m paying roughly $1 AUD a litre. No idea where Taiwan’s petrol comes from but population wise it’s roughly the same as Australia.

I think I’ll start rioting about then. Beat the rush.

Just for comparison, I usually fill up at my local Sainsbury’s (supermarket) petrol station because it has the cheapest petrol.

I travel a lot and have in the last year or so made a very determines attempt to use public transport much more than before. This is a patchy policy. sometimes I can’t achieve the journey by PT; sometimes it’s more expensive (much more expensive) than fuel for that journey and by business can’t absorb that.

But sometimes it turns out to be the best option, both logistically and financially. And you get to rest on the way!