There’s more on the way: Channel 7’s offering aimed at the male demographic “7-Mate” will also be HD-only.

Channel 10’s new “Eleven” will be SD, but it will replace the SD version of their sports channel “One”.

There are rumours Channel 9 will launch a new channel next year, and inevitably that’ll be HD-only, given they have to continue to broadcast their main channel in SD.

Time, perhaps, for those of you with no HD tuner to look into upgrading.

Once the commercial networks launch their third channels, by my calculations we’ll almost be at capacity, with 15, though it’s unclear to me if SBS has the right to put up any more channels.

Certainly things have grown since just a few years ago when there were 6 (analogue) channels: ABC, 7, 9, 10, SBS and Channel 31. 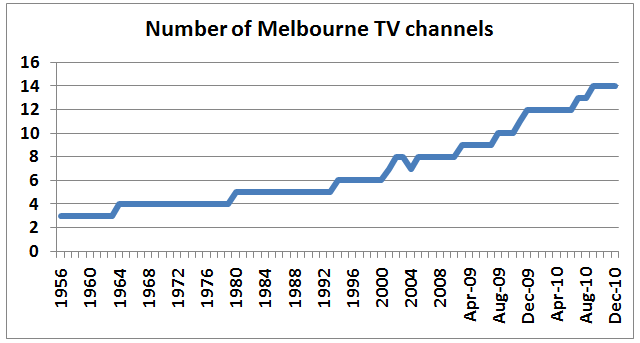 Note the graph is not linear. Based on some stuff from Wikipedia, counting distinct programming, and main channels only, not things like channels displaying TV guides, which were used at one time last decade. I may have missed a few minor and temporary ones, like that 3D test channel that ran for a while this year.

Ian, an Englishman used to the old UK channel numbering of BBC1, BBC2, ITV (implied “3”), Channel 4, Channel 5 etc, once remarked to me that when they first discovered Australia had a “Channel 10”, they wondered if we also had channels 1 to 9. We didn’t of course, but now we do, though they’re not all numbered like that. (In the mean time of course, the UK has also expanded its channel range via digital… and interestingly, the BBC’s “CBeebies” and “CBBC” are similar to the ABC2 and ABC3 daytime children target demographics.

How many people are watching what?

Here’s some figures from OzTam, Melbourne between 6am and midnight, for all homes and including cable TV share:

Despite glitches like those that affected Sunday night’s repeat of Insiders (where it started late, accidently switched to Inside Business for a mistaken minute or two, then flicked back but was cut short just as Barrie Cassidy made an interesting point), I’m very much enjoying ABC News 24.

This interesting piece highlights something that hadn’t occurred to me: because it covers major press conferences live and unedited, it’s proving a boon for niche journalists, such as the tech press, who are covering the debate over broadband, as they can’t afford to physically be at these press conferences, but can listen in via the TV coverage. And of course their readers, who can also watch the coverage for themselves.

10 replies on “Some further thoughts on Digital TV”

It seems crazy to me that, having made (or being well into making) the technological leap from analog to digital, we’re still saddled with a government-mandated “legacy” system in the form of SD broadcasts. Why didn’t the switch to digital mean a switch to HD digital from the start?

@jon, I would guess that in the late-90s (it launched in 2001) when they were planning, HD tuners were seen as too expensive to encourage household takeup.

And remember that there’s little noticeable difference between SD and HD for small-to-medium screen sizes (though there do seem to be less MPEG compression artefacts on HD, even on a medium-sized screen).

Daniel
thanks for the link to OzTam – I never knew it existed.
Interesting that ABC24 out-rates SkyNews. The fact that ABC24 is more than twice as popular in Sydney says something about its Sydney bias.
Rog/

We have “gaps” in our television channels to make way for regional stations with broadcast overlap.

Hence Ballarat has commercial stations VTV Channel 6 (WIN), Gippsland has GLV Channel 8 (Southern Cross) and Western Victoria has AMV Channel 12 (Prime). The ABC broadcasts on Channel 5A in Western Victoria, Channel 9 in Wodonga and Channel 1 in Bendigo as examples. So looking right across the state, many of the channels are filled.

We are regular watches of “The Drum” on News 24, though sometimes it’s more interesting than others. Certainly at the moment with all the goings on of the government or lack thereof.

Living in a country where every household has cable tv with a gabillion channels and the local HD offerings stands at 16-20 something channels alone – it’s really an eye opener as to how far behind Australia is on HDTV.

Such a big fuss seems to be made for what is an essential utility overseas, kind of like the internet.

Adam has nailed it. In Australia TV channel numbers relate to frequency (2, 7, 9, 10 in the big cities). Whereas in the UK it’s roughly the order stations started.

Australia was slow to get UHF as we could make do with our VHF channels (at the cost of FM radio). So most of our Aussie-made VHF-only TVs had a 13-position switch showing the channel numbers. UHF TVs either had a dial (less precise) or (more commonly) preset tuning. Preset tuning (more common in the UK) makes people far less aware of the channel number than if there is a big dial that you see each day.

But we still had low channel numbers (even now only the minority-interest SBS and community stations are on UHF with channel numbers in the 21 – 70 range (approx) in the capital cities). Given the urbanisation of the population and the potency of the networks, for most Australians Channel 7 is indeed the 7 network, Channel 2 is the ABC etc. It also helps that our big cities are so widely spaced that they can reuse the same channels.

But all this is changing with digital, and much like digital radio the transmission frequency, or departmentally-allocated channel number, is becoming irrelevant.

Wasn’t ABC Kids and Fly TV actually one channel shown at different times of the day ?

@enno, you’re right. Thanks; have fixed the graph.

Are they REALLY going to call it ‘7-Mate’?

Someone must have a few kangaroos loose in the top paddock.